Health visitor numbers in England down by a fifth since 2015

There were 8,244 full time equivalent health visitors in the NHS as of December 2017, the lowest number since August 2013.

It’s correct there were the equivalent of over 8,200 health visitors working full-time in the NHS in England as of December 2017.

It’s also correct that that’s a fall of more than 2,000 health visitors since October 2015.

Since NHS workforce numbers tend to vary according to the season, we usually need to compare the same month in each year to see more clearly what the change has been. In this case though the figures are roughly the same when we compare to December 2015.

In December 2009 there were just over 8,000 health visitors, and that level remained fairly constant until December 2013, when it started to rise. At around the peak in December 2015, there were about 10,200, meaning numbers have fallen by 19% since then. 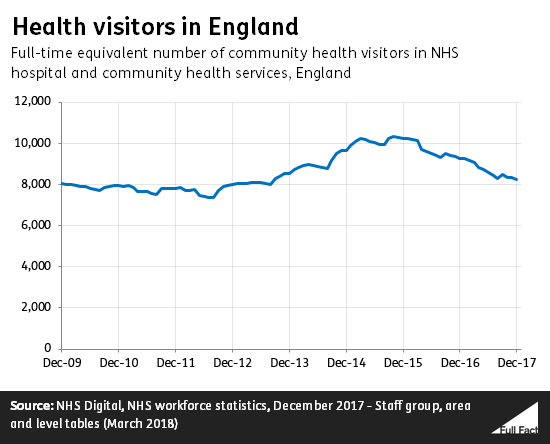 What is a health visitor?

Health visitors are specially qualified nurses and midwives who work with the community. They mainly work with very young children and their families. They also work with at-risk groups like homeless people, those with addictions and travellers. Responsibility for the commissioning of health visiting services was moved from NHS England to local authorities in 2015.

The health think tank King’s Fund has commented on recent dips in the number of nurses and health visitors combined. It says that “The key factor in the fall” is the lower number of nurses from the EU joining the UK nursing register, and an increase in EU staff leaving the NHS. They also note more staff leaving as a result of ill-health and for reasons of work-life balance.