How much can we charge people from overseas to use the NHS?

The government will fall short of its ambition to recover £500 million a year from overseas patients next year.

The government has an ambition to recover £500 million a year by 2017/18 from overseas patients not eligible for free NHS treatment in England. But it has estimated that the NHS will actually charge about £346 million that year.

“Hospitals are already supposed to charge those foreign patients who don’t qualify for free non-urgent care, but a report by the National Audit Office found that money raised next year would fall far short of the £500 million target set by the government.”

By 2017/18 the government aims to get back about £500 million a year of the money spent treating patients in England who aren’t eligible for free care under the NHS.

It has also estimated about £346 million will actually be charged that year.

This isn’t just for money being spent treating patients who deliberately come to the UK to use the NHS who aren’t eligible. It also covers things like treating people who are here on holiday and have broken a leg, or an expat who has come back to the UK to see a trusted doctor.

So is £500 million being spent every year treating health tourists?

No. It’s estimated that £100 to £300 million a year is spent on patients who come to the UK to use the NHS deliberately.

Another £1.8 billion a year is estimated to be spent on people who happen to end up needing medical treatment when they are here.

But there are certain services which the NHS can’t charge for at the moment, even if you don’t normally live in the UK. This includes emergency treatment or going to visit a GP. So even if the NHS charged for all the services it possibly could and received the money, it wouldn’t cover the full amount health tourism is estimated to cost.

Looking at the services that can be charged for, the government aims for about £500 million a year to be recovered by 2017/18. That’s from both the people who deliberately come to the UK to use the NHS, and those who just happen to use it when they’re in the UK.

The most senior civil servant at the Department of Health told a committee of MPs in November that the £500 million figure represented “the expectation of the sort of step change we wanted the system to make. As I say, the ultimate target is, as various people said, to pay what should be paid”.

Where will the £500 million come from?

The £500 million can be broken down into three separate bits. There is £200 million which the government wants to recover by more effectively identifying citizens of countries in the European Economic Area (EEA) who use the NHS and charging their home countries through schemes like the European Health Insurance Card (EHIC).

Another £200 million would come from a ‘health surcharge’ for non-EEA citizens. This was introduced in 2015 and is paid by students or temporary immigrants when they apply for visas lasting longer than six months.

Finally, £100 million would come from improving the way non-EEA immigrants are charged for any non-emergency hospital care they receive. This would only apply to those who hadn’t paid the surcharge. Such patients are usually invoiced after treatment.

How much will be charged next year?

The government has estimated the NHS will actually be able to charge £346 million to patients not eligible for free treatment in 2017/18. The National Audit Office says that the difference between this estimate and the £500 million aim “is mainly because income through the EHIC scheme has not increased as fast as the Department expected”.

The government announced on 6 February that it would be changing the rules this year to ensure that hospitals have to find out if patients are eligible for free treatment and charge them up front if not. 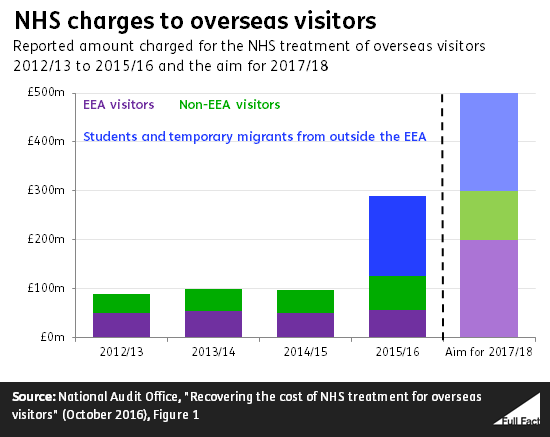