How much of the NHS budget is spent on people over 85?

We can't find any data to support this. Analysis by the Institute for Fiscal Studies suggests that by 2021/22 around 10% of health spending across the UK will go on those aged 85 plus.

Sky News told us it calculated the figures based on data published by the Institute for Fiscal Studies (IFS), but the IFS told us they don’t recognise these figures. We’ve asked Sky for more information.

Other figures we’ve seen from the IFS suggest that the proportion of health spending across the UK (rather than just the NHS budget) which goes to those aged 85 and over is likely to be around 10% by 2021/22.

The Institute for Fiscal Studies (IFS) told us it wasn’t familiar with the figures used by Sky News, but did provide us with other information.

When compared to a 30 year-old , spending across the UK on health (not just the NHS) for an 85 year-old is projected to be 5.6 times higher in 2021/22, and twice as much for a 65 year-old. That’s taking account of the fact that not all people of those ages will necessarily need to use health care.

But that doesn’t mean that 85 year-olds will require 5.6 times as much of the budget as 30 year-olds, because there are fewer people at that age. 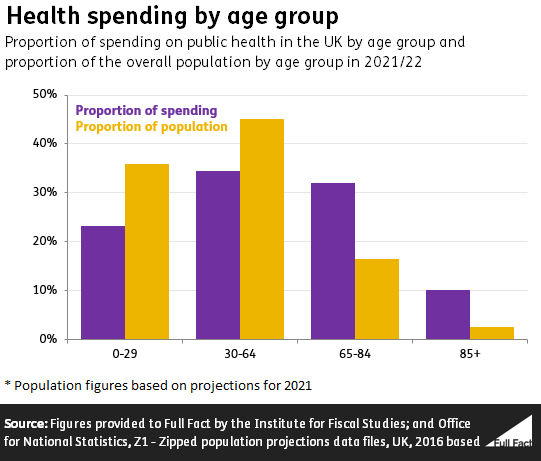 Most, but not all, of that money was spent on the NHS. The rest was spent on things like public health initiatives, education, training and infrastructure.

The IFS has said that “With the older population growing rapidly, along with the numbers suffering chronic health problems, and a growing pay and drugs bill, demands on the health service will only continue to grow.” 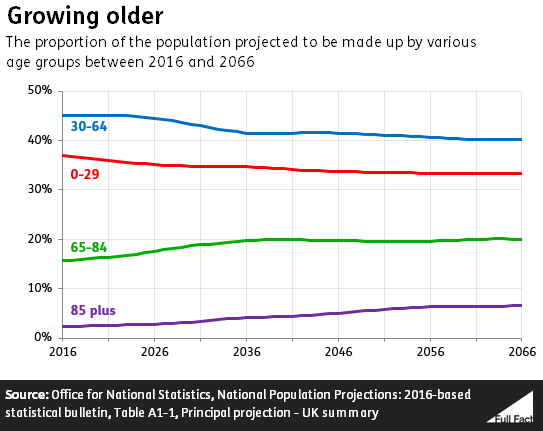