There have been three deaths linked to Covid-19 vaccines among children in Australia.

There is no evidence for this. The tweet claiming this is fake, purporting to be from an Australian health official. The New South Wales health ministry has said the information in the tweet is incorrect.

The tweet, which has been made to appear as though it was written by New South Wales chief health officer Dr Kerry Chant, reads: “Great result from the children’s [Covid-19 vaccine] roll-out,only 3 deaths linked and 106 adverse reactions out of 377000 vaccines.I would say that is a better result than expected.

“Make sure you get your children’s vaccine done before school starts.”

The health ministry in New South Wales has issued a statement saying: “NSW Chief Health Officer Dr. Kerry Chant did not author the Tweet or the Instagram post attributed to her, and the information contained in both of them is incorrect.”

Dr Chant’s Twitter account has since been temporarily deactivated. Reuters reported that this was to prevent further edited imagery  being used by others in future to spread vaccine misinformation.

The latest data released on 20 January, covering the period to 16 January, shows that 11 deaths in total have been linked to the vaccines across the whole of Australia. At that point in time, 19.6 million Australians had received at least one dose of vaccine, and 46.1 million doses had been administered in total.

An earlier release from 2 December 2021, covering the period to 28 November, put the number of deaths at nine, and said that the youngest person who had died was a 34-year-old woman.

At that point, the deaths of two adolescents had been reported after vaccination but the health authorities had not linked these to the vaccine.

In real tweets, the word “January” is contracted to “Jan” in the date format, there is a period between the username and the date, and the words “Dr Kerry Chant” do not appear below the username. 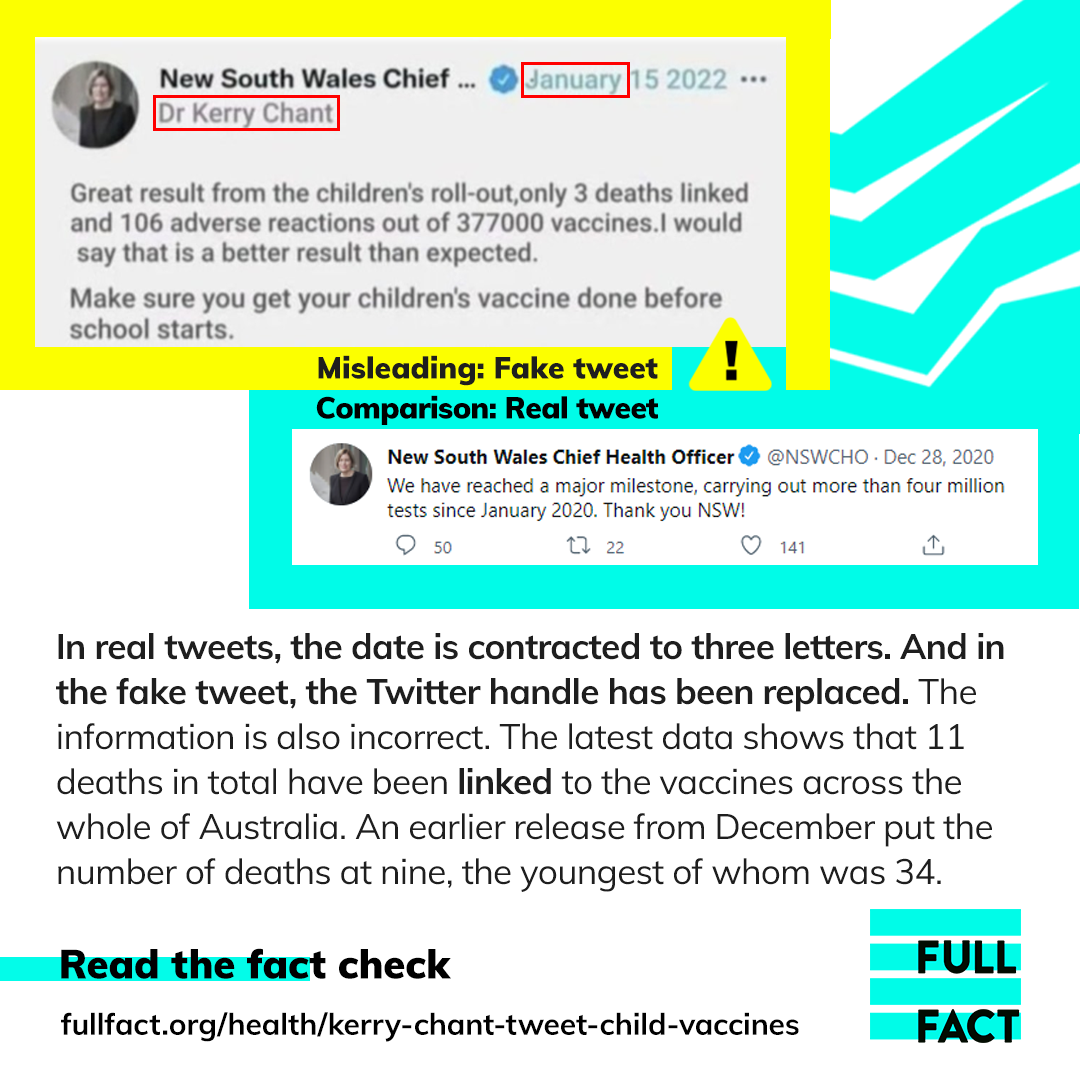 That said, it is simple to fake convincing looking tweets and other social media posts, so any screenshotted post which does not link to the original should be treated with caution.

In recent weeks there have been various false reports of children dying from Covid-19 vaccines in Australia.

On investigation, it turned out that the hospital at which he was claimed to have died had no record of treating any child with that description, and the New South Wales Ministry of Health said it could not locate any record of such an incident.

You can read more about the case here.

This article is part of our work fact checking potentially false pictures, videos and stories on Facebook. You can read more about this—and find out how to report Facebook content—here. For the purposes of that scheme, we’ve rated this claim as false because the tweet is faked and the information in it is incorrect.