Mental health: there are fewer beds, nurses and psychiatry trainees than in 2010

The number of hospital beds for people with acute mental health conditions has fallen by 30%.

This is the difference in the number of mental health and learning disabilities nurses between two different months which isn’t the best way to compare the figures. Comparing the figures in September 2009 and 2017 shows the drop has been larger.

The number of doctors in specialist psychiatry training fell from 3,187 in 2009 to 2,588 in the first quarter of this year.

“The number of hospital beds for people with acute mental health conditions, where a consultant psychiatrist is on hand to oversee treatment, has fallen by almost 30% since 2009.”

The number of overnight beds for those suffering with mental health issues, mental health nurses and psychiatrists in training in the NHS in England have all dropped since 2009.

The 30% drop claim compares years before and after a change in the way the data was collected in 2010, which means fewer bed types are now counted. The figure used in the Observer compares 2009/10 with 2017/18, which are not comparable.

NHS England said that since 2013/14, the drop may have been affected by trusts reclassifying beds so they are no longer “consultant-led”, and are instead run by “multidisciplinary teams”.

This is for beds under the care of consultants, so won’t cover all beds for people suffering with a mental illness. 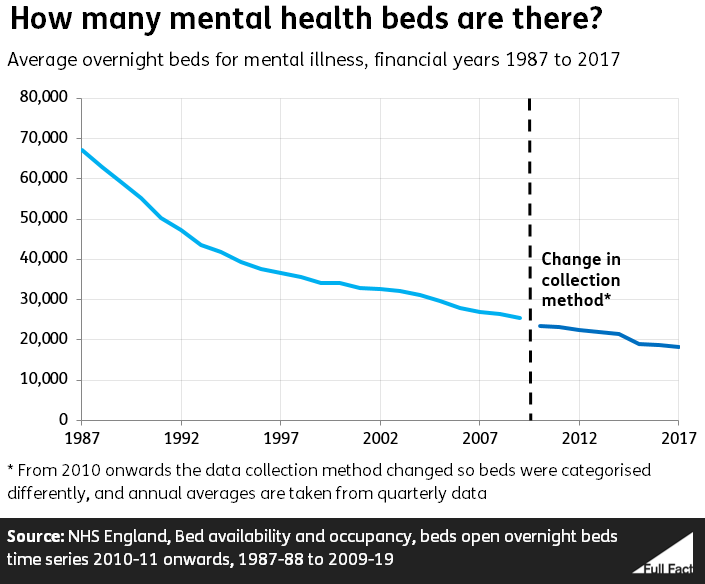 The number of hospital beds in general has fallen over the last 30 years, despite rising population and patient numbers, mainly because of advances in medicine.

The King’s Fund put this decrease down to the “policy shift to providing care for people with mental health problems and learning disabilities in the community rather than in institutional settings”. 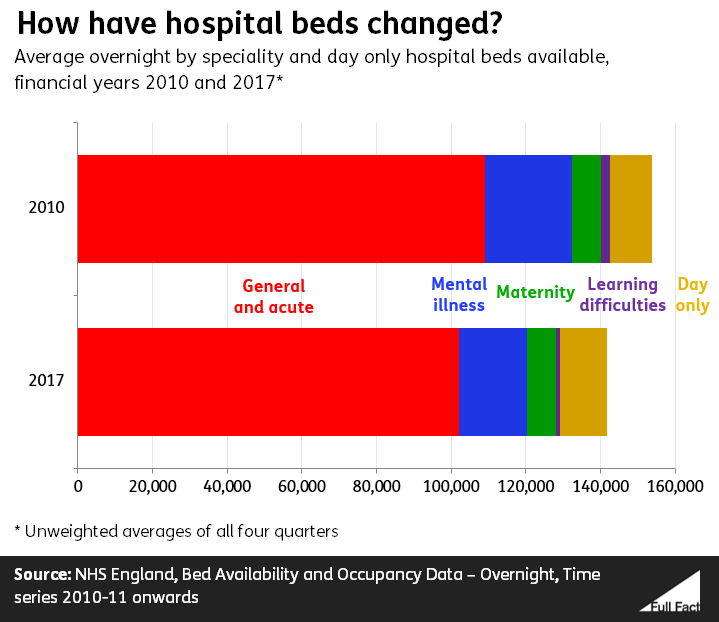 The number of full-time equivalent (FTE) mental health and learning disabilities nurses dropped by 16%, or by around 7,500 between September 2009 and September 2017.

The figures quoted in the claim compared the number of mental health and learning disability nurses between September 2009 and March 2018, but as the number of nurses working in the NHS in England changes throughout the year this isn’t a fair comparison.

The majority of these nurses (90% in March 2018) are mental health nurses, with the rest working with patients with learning disabilities.

10% of these nurses work with people with learning disabilities and difficulties, and are included in the number of mental health nurses because of a wider definition of “mental health nurses” used by NHS Digital, which publishes the figures.

Following their two foundations years of training after medical school, junior doctors can choose to specialise.

There were the equivalent of around 3,200 full-time junior doctors specialising in psychiatry training in September 2009. That number had fallen by around 500, or 15% by September 2017—the most recent comparable figures.

There were around 2,600 FTE junior doctors in psychiatry training in March 2018.

A report from Health Education England published in 2017 said not enough newly qualified doctors were “choosing/able to train in psychiatry” and that there was a higher proportion of unfilled core psychiatry training posts than in any other speciality.

It said that there were “low direct transition rates” from core psychiatry training into more specialised training and that the field relied on non-UK doctors choosing to specialise. It also said the workforce heavily relied on doctors who are neither training nor consultants, for which there isn’t “a secure supply pipeline”.

We corrected a typo in the section on mental health nurses. It previously said the number of FTE mental health and learning disability nurses had dropped between September 2009 and 2010 - rather than 2017.