There are more hospital beds.

Incorrect. The number of beds available in NHS hospitals in England has been falling for the last thirty years, something experts put down to medical innovations. 1,300 fewer beds were used by patients fit to be discharged in November 2017 compared to the year before.

There are more doctors.

There are more flu vaccines available than ever before.

“We’ve got more beds, more doctors, more flu vaccines available than ever before.”

The number of hospital beds available overall in NHS England has been decreasing over time. Mr Raab told us he was specifically referring to the number of beds used by patients who have delayed transfers of care—they are medically fit to leave hospital but haven’t yet been discharged. 1,300 fewer beds were occupied by patients with delayed transfers of care in November 2017 than in the same month the year before.

The number of doctors working in hospitals and community health services across NHS England has increased since 2010 and NHS England reported at the start of winter 2017 that more flu vaccines were being made available than ever before. Public Health England doesn’t yet have complete data on how many people have received the flu vaccine this winter.

The number of beds has been consistently falling over time

The number of NHS hospital beds in England has more than halved in the past thirty years, according to analysis by the health think tank the King’s Fund.

On average, there were estimated to be 141,000 beds available each day between July and September 2017, including both beds open overnight, and during the day only. 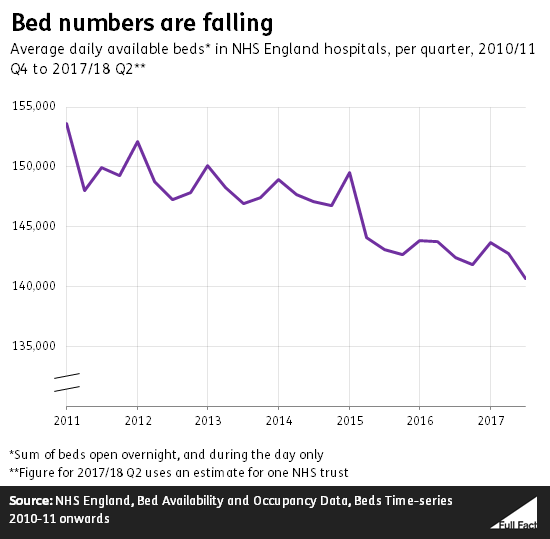 The average percentage of these beds which were occupied each day between July and September 2017 was 87.1%. That is 0.3 percentage points lower than at the same time the previous year, so there were slightly more beds free. But generally the proportion of hospital beds occupied has been increasing since at least 2010.

The King’s Fund points out that “Most other advanced health care systems have also reduced bed numbers in recent years” due to medical innovations which decrease the amount of time patients spend in hospital. For example certain operations can now be carried out in such a way that patients can leave on the same day. There’s also been a move away from hospitalising patients with mental health problems and learning disabilities, instead providing care in the community.

Fewer beds are being used by delayed transfers of care

Mr Raab directed us to NHS England figures showing a decrease in delayed transfers of care. This refers to the number of beds occupied by patients who are medically fit to leave hospital, but haven’t yet been discharged.

The number of these delays fell by about 20% between November 2016 and 2017. That meant around 1,300 fewer beds were used by patients with delayed transfers of care.

The number of beds used up as a result of delayed transfers is the lowest it has been since the winter of 2015/16, but it remains higher than at most points since at least August 2010. 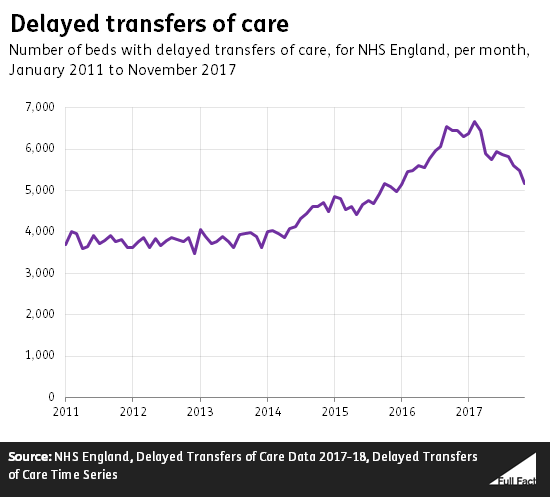 The number of doctors is going up

There were 109,000 full-time equivalent doctors working in NHS hospitals and community health services in England in September 2017. That’s an increase of around 2,800 since September 2016, and around 11,900 since the same month in 2010—the first year of the Coalition government.

The number of doctors has been rising steadily over time, but without taking into account other factors like patient numbers pressures on services this increase doesn’t tell us much about the impact on patients or the NHS.

This doesn’t include the number of GPs and we don’t have comparable figures going as far back as 2010 for them, but you can read more about GP numbers here.

Mr Raab directed us to a statement on flu vaccines made by NHS England in October. In it, Professor Dame Sally Davies, Chief Medical Officer for England said that there were “more people eligible than ever before”, with “the vaccine available in more locations”. The NHS England statement also announced “significant expansion of the national flu vaccination programme for key groups, aiming to offer the vaccine to over 21 million people.”

Since 2012 a programme of vaccinating healthy children aged two to 17 has begun to be rolled out. Children aged two to seven were eligible to receive the vaccine last year and this year eligibility for vaccination was extended to include eight year olds.

Public Health England (PHE) publishes data on the uptake of the seasonal flu vaccine among GP patients in England, focusing on vulnerable groups who are offered the vaccine free of charge. The proportion of patients aged over 65, pregnant women and small children who received the flu vaccine was higher in September to November 2017 than it had been the year before.

PHE say they’re still collecting data on how many people in total have received the flu vaccine this winter, so we can’t yet fully compare uptake to previous years. In 2016/17 the number of people in each of the groups given the vaccine free of charge had increased compared to the year before, although for over 65s the proportion getting the vaccine decreased slightly.