Not all NHS international visitors are health tourists 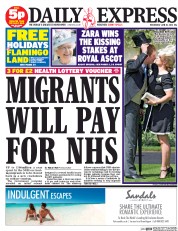 Readers of the front page of the Daily Express this morning could be forgiven for coming away thinking that all migrants are now going to have to pay up for the NHS at point of use.

This isn't the case - the comments reportedly made by the Health Minister Jeremy Hunt yesterday were about the money that's reclaimed by the NHS for treating overseas visitors, including tourists as well as migrants. It's also not the case that it's all money to be recouped from individuals paying - some of it is from countries who pay for their citizens' use of health systems abroad.

The online edition also referred to the plans as a "new bid to cut the £500 million-a-year health tourism bill".

But the £500m estimate isn't purely the cost of health tourism.

The government defines health tourists as "people who deliberately travel to England to get free NHS treatment". A government report estimated this group cost the NHS around £100m to £300m each year - although it noted that it is "impossible to estimate with confidence" the true figure.

The government's £500m estimate also includes further spending on international visitors not classed as health tourists.  For example, a tourist on holiday in England who finds they need healthcare while they're visiting. The government estimates £388 million is yet to be recovered from this spending every year.

There's also a new surcharge being introduced for temporary migrants using the NHS - at the cost of around £150 for students and around £200 for other temporary migrants. The government expects this will generate about £200m a year.

Our Spotlight has more information about the health tourism estimates.