The total number of deaths in the first three months of 2020 is lower than in any of the previous five years.

Incorrect. This is based on data that stops a week short. The real total is higher than it was in 2016 or 2019.

This was broadly correct for the first 14 weeks of the year, including a few days in April and in December 2019.

In the first 12 weeks of 2020, less than 1% of deaths registered in England and Wales had Covid-19 on the death certificate, but the rate has since risen to more than 30% for some weeks in April.

A viral post on Facebook has made a number of claims about the Covid-19 death rate, saying that fewer people died in the first three months of 2020 than over the same period in each of the last five years. Some readers have asked us to look into this question as well.

The claim in the post is not true. The figures cover different time periods and can’t be compared.

Where did these numbers come from?

The author of the post says they got their figures from the Office for National Statistics (ONS) website. We’re not sure exactly when the post first appeared, but it was being shared on Facebook around 18 April, when the equivalent monthly figures for the first three months of 2020 were not yet available.

The data used for the first three months of 2015-2019 describes the number of deaths registered monthly in England and Wales. Adding together the totals for January, February and March for each of these years gives the same figures that the post claims (except for 2017, when the ONS figures give a total of 153,798 instead of the 153,808 which is quoted in the post).

It appears that the author used slightly different figures to come up with their total for the first three months of 2020, using the weekly figures for deaths in the first 12 weeks of the year. These show that “a total of 138,913 deaths were registered in England and Wales between 28 December 2019 and 20 March 2020 (year to date)”. This period of 12 weeks starts four days earlier, and ends 11 days earlier, than the data it’s compared to for 2015-2019. It therefore misses an entire week of deaths that occurred during the pandemic.

The effect of Covid-19

This calculation is a mistake that we think comes from mixing up the data from two different periods. In the 12-week period when 138,913 people died, the ONS actually counted just 103 death registrations mentioning Covid-19, not 4,122. The figure of 4,122 Covid-19 deaths seems to come from the data after 14 weeks.

After 17 weeks of 2020, 229,294 deaths had been registered in England and Wales, which is more than the total up to the same point in any of the previous five years. 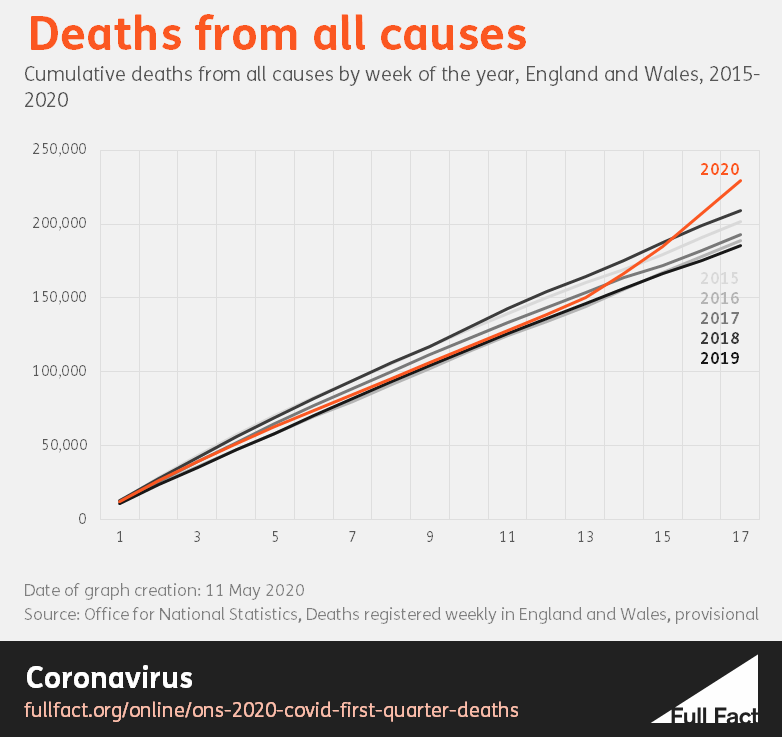 This article is part of our work fact checking potentially false pictures, videos and stories on Facebook. You can read more about this—and find out how to report Facebook content—here. For the purposes of that scheme, we’ve rated this claim as false because the figures used are not comparable.