How many people with dementia have to sell their homes to pay for care?

One in three dementia patients are forced to sell their homes.

Incorrect. A poll found that 16% of respondents who said they had friends or family with dementia also said that person had to sell their home to pay for care. But there are other drawbacks which mean the results are not reliable.

Since we originally wrote this the Daily Mail corrected their article. 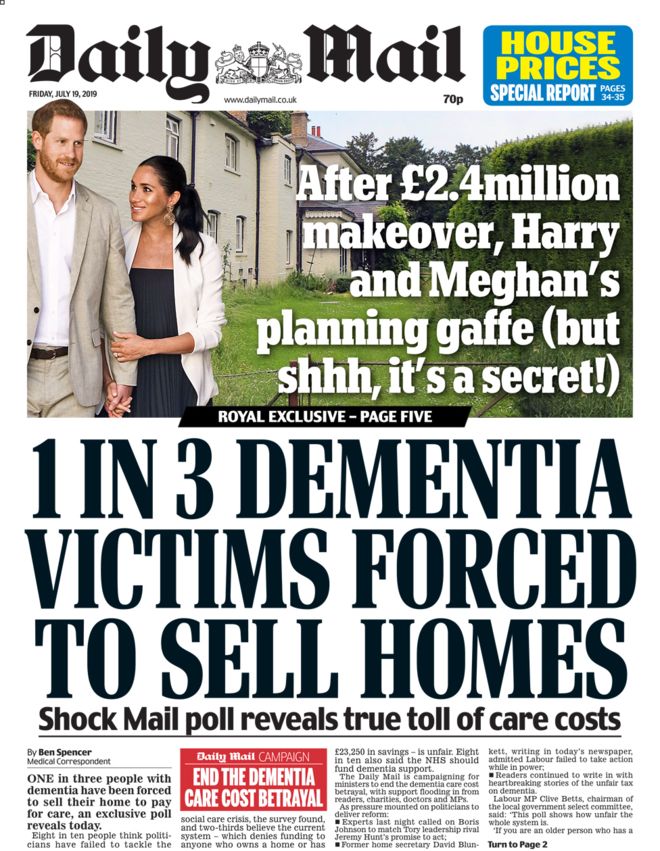 The Daily Mail claimed on its front page on Friday that one in three (31%) dementia patients have been forced to sell their home to pay for care.

But this is incorrect. A poll commissioned by the Mail found that 16%, not 31%, of people with a friend or family member with dementia said that person had to sell their house to pay for care.

The 31% in the poll refers to something different: 31% of people who responded that they knew someone with dementia who also had to pay for their care said that person had to sell their home as a result.

Since we originally wrote this, we got in touch with the Daily Mail, who have now corrected their article. We’d like to thank the Mail for their swift correction.

What do we know about the poll?

Around 1,000 UK adults were surveyed in July 2019 and the responses were then weighted to be representative of the UK adult population.

26% of respondents said a member of their family or a friend had been diagnosed with dementia.

That’s not the only issue with the data.

It’s based on friends and family reporting that they know someone with dementia, and the findings from this can’t be used to draw conclusions about the circumstances of people who have dementia.

That’s because we don’t know how many people with dementia each survey respondent knew, and which of those people they answered these questions on behalf of.

The survey doesn’t include any process to prevent against this (for example by making the respondent list the people with dementia they know and then choosing one randomly for them to answer on behalf of).

So we can’t be sure that the experiences described by respondents were representative of people with dementia more generally. It's also based on a small number of people—once the survey filters out people who don’t know anyone else with dementia or who pays for their care, there are only just under 150 people actually being asked if they know someone who’s had to sell their home. That’s small enough that any findings should be treated with a lot of caution.

In theory, there could also be double-counting in surveys like this—for example if two respondents shared a friend or family member with dementia they would essentially have been responding to the survey on behalf of the same person. But this is unlikely to happen in practice.

How many people sell their homes to pay for care?

There’s no definitive figure for how many people have to sell their homes to pay for care. When we factchecked it a number of years ago, we found figures ranging from around 20,000 to 70,000 people per year.

These figures were all estimates, based on broad assumptions and in some cases surveys which weren’t representative.

What are the rules around paying for care?

At the moment, people needing social care can have it paid for in part or in full by their local council, but usually only if they have wealth below £23,250. The value of your home is included in this ‘wealth’ if you do not receive care at home.

In some cases people who receive care from their council can use a deferred payment scheme to pay for it.

People who receive care in a care home can put off paying for their care up until the point of their death. This can often lead to their home being sold at that point to repay the council.

Of course, these rules only apply if a person receives care from their local council, not if they receive care privately.

During the 2017 general election the government brought forward a number of plans relating to social care.

The main proposals were that the £23,250 cap would be raised to £100,000 but that the value of a person’s home would be included in this valuation, even if they were receiving care in their home. As mentioned, currently homes are only included in wealth valuation if the person receives care outside the home. Ultimately these proposals were not enacted.

The government announced in March 2017 that it would be publishing new proposals looking at social care and how it is funded, but these have been delayed a number of times.

We updated this piece to include the fact that the Daily Mail corrected their article.

We got in touch to request corrections regarding claims made in the Daily Mail, in the Express and in the Mirror.

The Daily Mail made a correction.

The Express and the Mirror did not respond.