Period poverty: how widespread is it?

One in four girls or women are in period poverty and are unable to afford sanitary products.

27% of women asked by a survey in England, Scotland and Wales said this was the case. But the survey wasn’t designed to be representative so it can’t tell us about the wider population. Other representative surveys have found the number is around one in ten.

Period poverty has forced more than a quarter of females to miss work or school.

Of those responding to the survey the figure seems to be closer to one in ten, but it’s unclear and we’ve asked for more information. The survey also wasn’t designed to be representative so it can’t tell us about the wider population.

“Period poverty has forced more than a quarter of females to miss work or school, survey finds”

“One in four girls or women left in period poverty, unable to afford sanitary products”

“Period poverty has caused more than quarter of women to miss work or school, poll finds”

A number of media reports last month focused on the findings of a survey on period poverty. Period poverty is the term used to describe when women and girls struggle or are unable to afford menstrual products and the impact this has on them.

The survey found around a quarter of women and girls who responded said they had experienced period poverty at some point, but it wasn’t designed to be nationally representative so we can’t reliably apply this figure to the wider population. Other more reliable surveys suggest the figure is nearer one in ten young women and girls across the UK.

The latest survey wasn’t designed to be nationally representative

27% of women and girls responding to the survey said they couldn’t afford menstrual products.

The survey was conducted online by PR firm GingerComms, the Bloody Big Brunch campaign and Hey Girls, a sanitary product company. It asked questions to around 1,000 people (both men and women) across England, Scotland and Wales.

The survey also found that, of those respondents who said they’d experienced period poverty, over a quarter had missed school or work as a result. This would seem to suggest that around 1 in 10 of all women and girls responding to the survey, rather than a quarter as was reported by some media, had missed school or work due to period poverty. The wording of the press release is not completely clear though, and we’ve asked the team behind it for more information.

The survey can’t be used to reliably make statements about the wider population of Great Britain, because GingerComms told us that the participants weren’t selected to be nationally representative and the final results weren’t weighted for this either.

We also don’t know how the questions in the survey were worded. The wording of questions can have a big effect on answers, so without seeing the wording of this survey we don’t know how reliable its findings are. We’ve asked GingerComms to send us the full results of the poll, which it said it was unable to do, so we asked it for more information. It was able to answer some of our questions but not all as it didn’t do the analysis on the data it collected. We’ve asked Bloody Big Brunch and Hey Girls for more information too.

The results are higher than those found in other polls 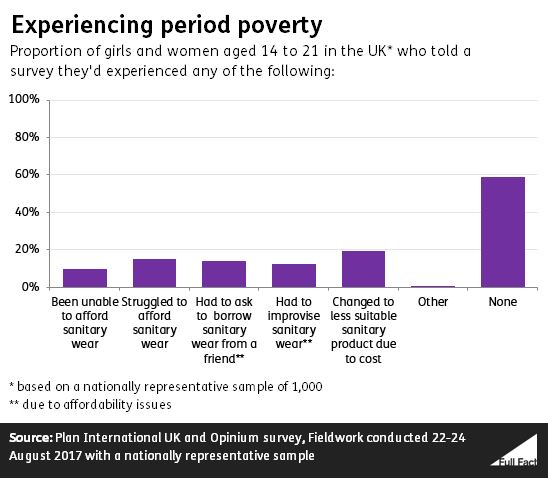 Pollsters YouGov also ran a survey for the Mayor of London’s Office in February and March 2018. It found that 17% of 16-24 year-olds girls living in London said they had “struggled to afford sanitary wear” or “been unable to afford sanitary wear” at some point. The question didn’t specify a timeframe so this could have been at any point since their periods began. This was based on a nationally representative sample of around 700 girls and young women.