Who’s paying £20 billion for the NHS?

The Prime Minister has announced that the NHS in England will receive a funding increase totalling £20.5 billion in real terms by 2023/24.

The Prime Minister has said that this will mean an average increase of around 3.4% in spending a year from 2019/20, once inflation is accounted for.

In addition to this she also announced that an extra £1.25 billion a year will be set aside for “a specific pensions pressure” in the NHS.

The Prime Minister has said that more details will be announced in due course and before the next spending review.

What do the experts think?

The Health Foundation think tank has said that this money will “help stem further decline in the health service, but it’s simply not enough to address the fundamental challenges facing the NHS, or fund essential improvements to services that are flagging.”

The Nuffield Trust think tank has said that the planned funding will “mean the NHS can finally make some longer-term plans about staffing and services and ends the decade of austerity affecting the health service”.

The King’s Fund think tank has said “Jeremy Hunt and Simon Stevens have secured the best deal they could in the circumstances”, adding that “hard choices lie ahead”.

All three think tanks have said that NHS funding would need to increase by at least 4% a year in real terms in order to meet the NHS’s needs.

Analysis published by the Institute for Fiscal Studies (IFS) last month said that total health care spending in England (not just on the NHS) would need to increase by around 3.3% a year over the next 15 years in order for the NHS to keep functioning at its current level. For services to be “improved” it said that the spending increase would need to be at least 4% a year.

Where will the money come from?

The Prime Minister has said that some of the money for the NHS will come from a “Brexit dividend”. There isn’t any extra guaranteed money available as a result of ending our payments to the EU budget, because those savings are likely to be more than offset by other costs associated with Brexit.

We’ve written more about the impact of Brexit dividends here.

In the absence of a Brexit dividend, any extra funding given to the NHS would need to come from another source.

That could include reducing spending elsewhere. Last month the IFS released a report which considered the impact of increasing NHS funding on other areas of government spending. It found that, in order to keep the NHS at the same standard as it is now it would require reductions of around £42 billion on other areas of spending by 2033/34. It said “it looks like there is limited potential elsewhere for making cuts that could compensate for rises in health spending”.

Other suggestions for where the money might come from include changes to taxation—either freezing tax thresholds or increasing taxes in order to raise the money—and from increasing borrowing.

The Prime Minister has also said that “across the nation taxpayers will have to contribute a bit more in a fair and balanced way to support the NHS we all use”. The specifics of how this will work haven’t yet been outlined.

Increasing VAT by 1p would raise around £6 billion a year and the IFS has explored further options for tax rises here.

It also said there was a possibility of applying VAT to all goods—including those currently exempt—and at a standard rate. This is likely to raise “substantial sums” according to the IFS, but also “prove unpopular”. 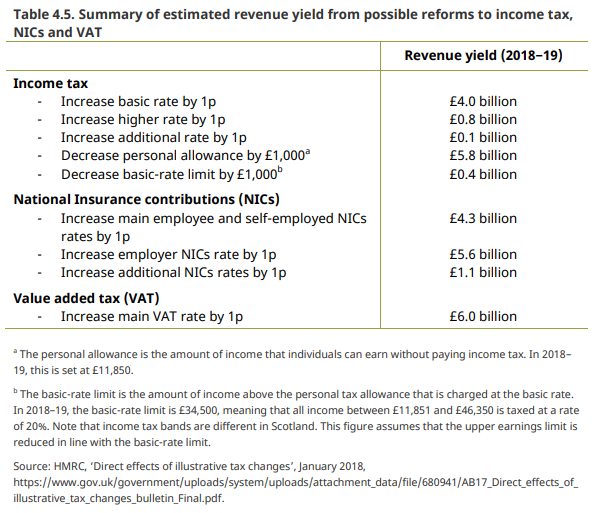 It also explores what would happen if a dedicated NHS tax was introduced, more information on that is available here.

In March the Chancellor said that if public finances continued to improve then he would have the “capacity to enable further increases in public spending and investment in the years ahead”.

The Resolution Foundation has also said that it might be “reasonable” to expect around half of the NHS funding to come from borrowing, though the exact amount will “greatly depend” on the economic outlook.

The IFS has calculated that there would need to be additional borrowing of around 3% of GDP in 2033/34 to fill the NHS funding gap, but it has added that while this is possible borrowing can’t be a long-term solution.

The IFS has also outlined a number of other ideas for raising money, such as charging for NHS services and selling off buildings and land owned by the NHS as recommended in the Naylor Review.

What does this mean for social care and public health funding?

Responding to the Prime Minister’s announcement the three health think thanks have described it as “worrying” and “not quite all it seems” as it doesn’t include any mention of funding for public health programmes, social care, or things like hospital buildings and staff training.

We’ve written before about the concerns raised by think tanks and NHS senior managers that funding specifically targeted at the NHS has come at the same time as other elements of health spending, for example public health, have been falling.

In response to the announcement of £20 billion for the NHS over the next five years the Chair of the Health Select Committee, Dr Sarah Wollaston MP, said that while she welcomed the announcement it would “not deliver as planned without attention to and uplifts for public health (prevention), social care, workforce training & capital/transformation budgets”.

Across the whole Department of Health (including other areas like public health) the Nuffield Trust has calculated that the increase will amount to around 3% a year, rather than 3.4%.

The IFS has estimated that there will be a £3 billion gap in social care spending by 2023/24.

The Prime Minister has also said that “We will be publishing the green paper in due course on social care. But it's right that we must recognise the impact social care has on the NHS, and the way in which these work together. And I'm very clear that we need to make sure that in dealing with social care it doesn't put added pressure is on to the NHS. We want to see this long-term plan for the NHS delivering for the NHS.”