Do 74 people try to enter the UK illegally every day?

75 attempts a day were prevented on average, but that doesn’t mean 75 individual people.

We don’t know how many people entered the UK without being detected.

“On average, 74 “clandestines” were stopped at British border controls on the Continent each day between 2010 and 2015... Experts estimate that for every migrant caught at least two are successful. If true, between 2010 and 2015 Britain’s underground population rocketed by 327,276—more than the size of the city of Nottingham.”

Between 2010 and 2015 nearly 164,000 attempts at “clandestine entry” to the UK were detected at border controls in Brussels, Calais, Coquelles, Dunkirk, Lille and Paris.

That works out at around 75 attempts a day on average, according to Home Office figures.

However, these attempts weren’t evenly spread across the six years so the average isn’t all that helpful. Most of the attempts in those six years happened in 2015 when 84,000 were made. 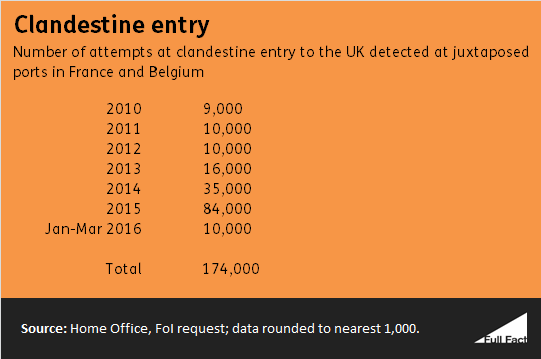 These numbers come with a health warning: they haven’t got the status of “Official Statistics” or “National Statistics”. They come directly from a Home Office operational system.

The Express says “experts estimate that for every migrant caught at least two are successful”. Experts at the Migration Observatory at Oxford University told us they don’t know of any studies which support this figure.

Even if it’s accurate, it isn’t possible to simply multiply the Home Office figures on clandestine entry attempts by two to come up with a number of people illegally entering the UK.

The key word here is “attempts”. One person might try to enter the UK a number of times and be counted each time they do. It doesn’t mean that 164,000 individual people tried.

The head of the UK’s Border Force estimated last year that around 6,000 migrants managed to enter the UK without being detected by the Border Force. But this is just the figure for those who later admitted to having entered the country clandestinely.

It’s notoriously difficult to get a fix on the number of people who might be in the country without permission. As the Migration Observatory has put it in the past, estimates are:

“inadequate, vague, contested and out of date. Any efforts to estimate the number of irregular migrants in the UK or in other countries are automatically limited by the simple reality that this is a set of people who, by definition, do not wish to be found or counted”.

The most recent study estimated that somewhere between 417,000 to 863,000 irregular migrants and their children were living in the UK at the end of 2007. The majority were thought to be living in London. But this was based on data from the 2001 census—there’s been another since—and no major formal studies have been done more recently.

Most of those in the UK illegally are likely to have overstayed an existing visa or not stuck to the exact conditions of one, rather than snuck into the country.