No up-to-date, reliable figures currently exist on the total number of unauthorised migrants in the UK.

Immigrants may be considered unauthorised if they do not have permission to reside in the UK, having entered illegally or overstayed their visa. Some definitions include people who are here legally but have violated the agreed terms of their leave to stay in the UK in some other way, such as by working without authorisation.

Some people may also move in and out of unauthorised status. For this reason, as well as the inherent difficulties recording the numbers of people violating immigration laws, there is no single, reliable estimate of the total number of unauthorised migrants.

The most recent estimate, which is now quite out of date, suggested that there may have been between 417,000 and 863,000 migrants and their children living in the UK without authorisation to remain, at the end of 2007. By its nature, the size of this population is very difficult to measure.

Although the size of the Migration Refusal Pool (MRP) is also commonly used in the context of debate about unauthorised residents, it is not a reliable measure of illegal immigration.

There are several other data quality problems that make the MRP an unreliable source of data for evaluating irregular migration trends. At the end of 2014 there were 173,371 people in the main MRP, which covers the period from December 2008 onwards; the Home Office now also separately reports data on cases from before December 2008, which included 94,684 records at the end of 2014.

The number of enforced removals of people without authorisation to remain has gradually fallen since 2005. The number of recorded "voluntary" departures has increased, although it is not clear to what extent data improvements are responsible for the change.

Data on departures includes people who were either removed from the country or departed "voluntarily" after the government started proceedings to remove them. Voluntary departures include people who leave under an "Assisted Voluntary Return" programme as well as people who make their own travel arrangements and leave with or without notifying the Home Office.

However, comparisons over time must be treated with caution because improvements in collecting data on voluntary departures since 2005 may have contributed to higher numbers.

Similarly, the 8,200 decrease in voluntary departures between 2013 and 2014 should be treated with caution. In fact, the number of voluntary departures is usually understated when the figures are first published because of people who leave without notifying the authorities. For example, the 2012 figure was revised up by more than 3,600 after its initial publication.

As a result, it is likely that the 2014 data will eventually show a smaller difference from 2013.

Since 2010, the number of foreign national offenders removed annually from the UK has fluctuated between about 4,600 and 5,300.

The Home Office has powers to start deportation proceedings against foreign nationals, including foreign national offenders, and in some cases it is required to do so. There are some exceptions, for example on the grounds of human rights. 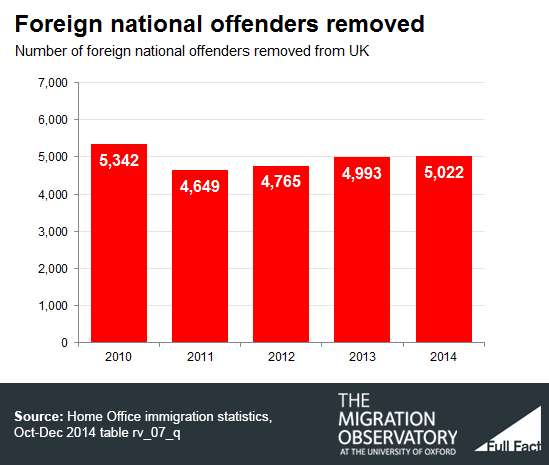 According to the National Audit Office, reducing the number of foreign national offenders in the UK has been difficult despite the presence of more caseworkers and additional powers introduced by the 2014 Immigration Act.

Specifically, the NAO highlighted human rights and EU free movement laws, as well as the fact that some overseas countries were unwilling to accept their nationals or provide travel documents. Factors considered in human rights related cases include the length of time the person has spent in the country and the presence of family members here.

In the last three months of 2014, Home Office data recorded 570 foreign national offenders as facing some sort of barrier to removal or deportation. Of these, 233 cases were either waiting for travel documents or faced some difficulty obtaining them. In 201 of the 570 cases the barrier was a challenge to deportation, such as an appeal or application to revoke a deportation order.

This briefing was written by William Allen and Madeleine Sumption of the Migration Observatory in collaboration with Full Fact. Thanks to Alison Harvey, Jon Simmons and Bridget Anderson for their helpful comments on a previous version. This work has been funded by the Nuffield Foundation but the content is the responsibility of the authors and of Full Fact, and not of the Nuffield Foundation.