Is EU immigration to blame for missing the net migration target?

Net migration from other EU countries isn't the only reason the government hasn't met its net migration target.

"We have seen many more people from the EU coming to Britain than originally anticipated … as a result, our action has not been enough to cut annual net migration to the tens of thousands"

"I want to see immigration come down. That's why we've taken all the steps we have. It hasn't worked so far because of the large numbers coming from inside the EU"

The net migration target overall has been consistently unmet. Even with zero net migration from the rest of the EU, this would still have been the case in recent years—with the exception of periods in 2012 and 2013.

This government, like the Coalition before it, has said that it wants to reduce annual net migration—the difference between the number of people coming to live in the UK and the number leaving in a given year—to tens of thousands a year. This has been variously phrased as an "ambition" or a "target" over the years.

Whatever it's called, it's not been met. The government's own impact assessments as far back as 2011 suggested as much. Net migration was an estimated 327,000 in the year to March 2016, according to the latest figures from the Office for National Statistics.

It’s not certain the target is being met even if the estimates fall slightly below 100,000. At the moment, the level of uncertainty in the estimates mean ‘true’ net migration could be tens of thousands higher or lower than the published figures.

It would need to fall a lot lower, or remain lower for a prolonged period of time, for us to be more confident the target was being met.

Immigration from the EU has driven most of the recent rise in net migration, and this may well be related to the UK's relatively strong economic performance.

But if EU net migration had been zero since the Coalition came to office in 2010, the target would only have been met in parts of 2012 and 2013. 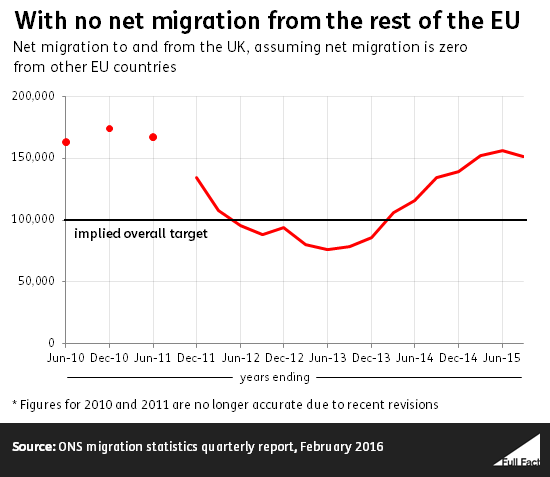 EU net migration is never likely to be zero

Net migration from the rest of the EU has been unusually high in recent years. But looking back before that, it was typically been around 80,000 in the years since 2004, and between 6,000 and 30,000 before that.

There's still a lot of uncertainty around these estimates, but even reducing EU net migration to the lower levels of recent years would still likely mean the target wouldn't have been hit in 2012 or 2013.