“When I was Home Secretary the net migration figure was around about 160,000 and now it’s at record levels of 380,000. Incidentally I don’t take any credit for that, I was Home Secretary during the height of the crisis… if your economy is so bad and if you’re in bad times you’re not going to want to come and work here.”

These figures aren’t correct, but it is correct to say that net migration is currently the highest estimate on record.

Net migration—the difference between the number of people coming to live in the UK and moving abroad—was 336,000 in the latest set of figures, which cover the year to June 2015.

That matches the level for the year to March 2015, which is the highest level that’s ever been recorded since comparable records began in 1991. Years prior to that indicate lower levels as well.

Working out levels of migration is rather tricky, so there’s always considerable uncertainty in these estimates. The real level of net migration over recent years could be around 40,000 more or less than the estimated level.

The figures have been revised for that period, so it’s possible Mr Johnson was referring to the previous set of estimates. In the year to June 2009, it was previously estimated that net migration was 166,000, rising to 235,000 in the year to June 2010. 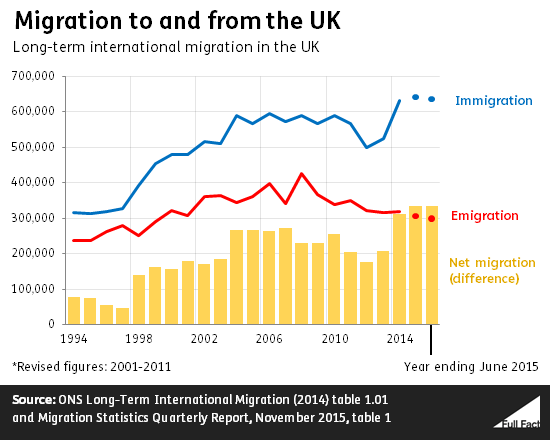 Mr Johnson went on to say that he didn’t think restricting benefits to EU migrants would reduce immigration. We’ve covered whether it would in a previous factcheck.