Is 82% of population growth driven by migration?

“Linked to” here combines an estimate of both net migration and children born to immigrant parents. This is likely to be on the right scale but too precise a figure, as it rests on a number of assumptions and uncertain data sources.

“Migration linked to 82% of growth in the population”

Population growth is driven by two things—net migration, and “natural change” (the difference between the number of births and deaths). From 2001 to 2016, migration accounted for 58% of this change in the UK.

However, the think tank Migration Watch has asked what percentage of natural change is itself caused by migration—i.e. how much population change is driven by births to immigrant parents.

So it’s important to bear in mind these headlines aren’t just talking about the direct impact of net migration—they’re factoring in an estimate of the indirect impact of children of immigrant parents.

This calculation is broadly accurate, and fits with wider demographic trends—net migration picked up significantly in the late 1990s, as did the number of children born to immigrant parents.

However, the calculations rest on some uncertain assumptions —for instance, recordings of deaths don’t state whether someone is the child of an immigrant, so the deaths of people with immigrant parents has to be estimated using other data. There have also been recently highlighted issues with the accuracy of net migration data. This means that we should not treat the 82% figure as exact, but rather broadly accurate, and indicative of wider demographic patterns.

How is population change calculated?

The combined effect of net migration and natural change is used to estimate population increase each year.

Analysis of Office for National Statistics (ONS) data by the Migration Observatory at Oxford University shows that, since the early 1990s, net migration has become an increasing driver of population change. It was a bigger driver than natural change in every year from mid-1998 onwards, except the years to mid-2012 and -2013. The rate of natural change has also picked up notably since the mid-2000s. 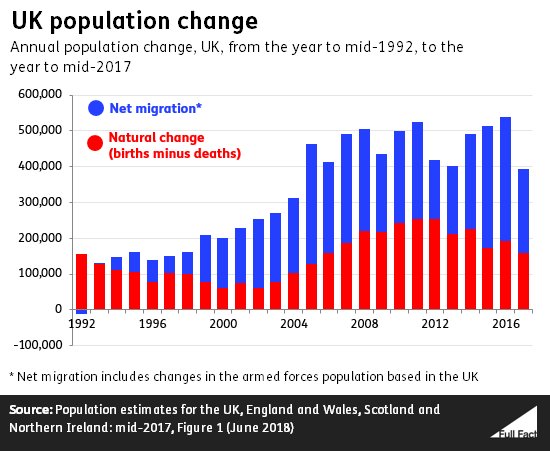 So why is it being reported that 82% of population growth is linked to migration?

Migration Watch, which produced the 82% figure, is looking at population change in a slightly different way. It also wants to know how much “natural change” is itself a result of migration—i.e. how many births in the UK are to immigrant parents.

This involves a number of calculations, some of which are fairly complex, and the overall picture seems correct.

The net migration data is taken from the ONS. Migration Watch then has to estimate what percentage of natural change is down to migration. This is done by estimating the number of children born to non-UK born parents each year, using official data. The calculations we’ve seen are accurate.

The complexities of the calculation mean the numbers it produces are unlikely to be perfect. Indeed, based on its calculations, Migration Watch notes that there are slight disparities between what its estimates put population growth at each year, and the official data.

This is not a significant disparity however, and the figures broadly fit with what wider data tells us about migration. As outlined above, we know net migration has been rising in the last fifteen years. Births to immigrant mothers have also been rising since the 1990s, as the chart below shows. 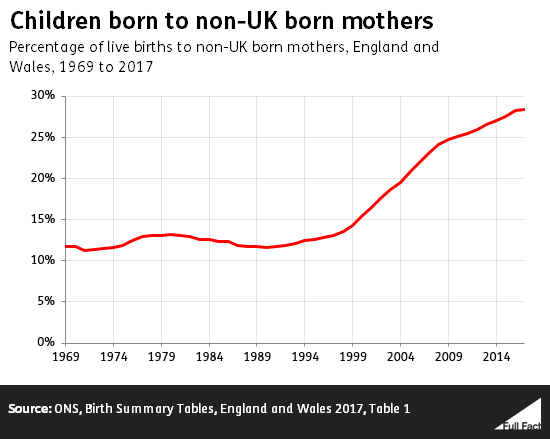 Any net migration figures should be treated with caution, though

Another reason why the 82% figure should not be treated as perfect is that the official data (used by Migration Watch) may well be giving inaccurate estimates of net migration.

It shows that the level of net immigration to the UK among non-EU citizens has been significant in the last ten years—with a cumulative increase of over 1.5 million people (before accounting for any deaths). However, UK population data tells a different story, showing that the growth of the non-EU-born population has been smaller (closer to one million).

On the flipside, it could be undercounting the number of EU migrants who move to the UK.

We’ve looked before at the reasons why this is happening (here). In short, we can’t know for sure whether the overall estimates are accurate or not, so this serves as a warning against treating migration figures as exact.

The 2011 census also revealed that the survey which measures net migration data had been doing so inaccurately. Net migration figures between 2001 and 2011 were revised up as a result. We won’t know until after the next census in 2021 if that is still an issue.

Numbers aside, the headline phrasing that over 80% of population growth is “linked” to migration has caused some controversy. It has been argued that, by combining migrants and their children into one figure “linked” to migration, Migration Watch is making the “assumption that the British born children of migrants are in some sense migrants”, or less integrated into the population. Migration Watch argues that it is undertaking a demographic analysis rather than an ethnic or cultural one. We don’t seek to comment on this debate.

In any case, it’s helpful to break down the 82% figure into its constituent parts, and understand that it is the product of several trends. Otherwise, newspaper headlines about population change being linked to migration risk masking the complexities of the calculation.