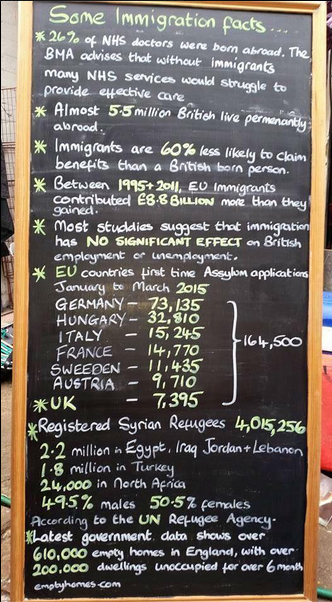 There's a factual basis to all of the claims, but some either misunderstand the facts available, or give a selective viewpoint on them.

Each time there are several sides to the story, and we're only getting one.

Verdict: There are no such figures for doctors' birthplace. But there are similar figures for nationality.

As far as we're aware there aren't any figures for where NHS doctors are born, but there are for their nationality, or where they qualified to practice.

Towards the end of last year about a quarter (24%) of doctors in the English NHS were foreign nationals, out of over 100,000. It was 26% a few years ago, which could explain where this figure comes from.

That doesn't include GPs, but does factor in how many hours doctors work (the 'full-time equivalent' measure).

Claim: The BMA advises that without immigrants many NHS services would struggle to provide effective care

Verdict: Spot on for doctors, according to the horse's mouth.

We troubled the British Medical Association for its own thoughts. It sent us this:

"Overseas doctors have for many years made a valuable and important contribution to the NHS, especially in key services where there has been a historic shortage of UK trained doctors. Without the support of these doctors many NHS services would struggle to provide effective care to their patients."

Verdict: Out of date, but in the right ballpark.

It's not surprising the estimates vary. While the IPPR counted only people classed as UK nationals, the UN considers people born in the UK where the data is available, and only where it isn't do they count UK-nationals. The World Bank admits tellingly that "considerably more effort is needed to improve the quality of [its] data."

Verdict: Steamrollers over a complex issue, and only refers to certain immigrants.

We covered this topic in more detail during the 2015 election, the answers vary depending on what kinds of benefit you are looking at.

The 60% figure is based on old research about the impact of immigrants from the eight EU member states that joined in 2004 (three more have joined since).

Recent research suggests foreign-born people are less likely than UK-born people to be receiving the main out of work benefits, but more likely to be getting tax credits.

Claim: Between 1995 and 2011, EU immigrants contributed £8.8 billion more than they gained

The figure accurately quotes one finding from study by the Centre for Research and Analysis of Migration last year. That is, one finding amongst many. We've explained previously that immigrants from outside the EU contribute a lot less than EU immigrants, for instance, and other findings would even dispute that these immigrants contribute more than they take away from the state.

Claim: Most studies suggest immigration has no significant impact on employment or unemployment

Verdict: Fair, but there are exceptions for non-EU immigrants.

Research does not find a significant impact of overall immigration on unemployment in the UK, but the evidence suggests that immigration from outside the EU could have a negative impact on the employment of UK-born workers, especially during an economic downturn.

The picture for wages is more complicated. UK research suggests that immigration has a small impact on average wages of existing workers but more significant effects for certain groups: low-wage workers lose while medium and high-paid workers gain.

Verdict: True and factchecked: this puts the UK 7th out of 28 EU members. 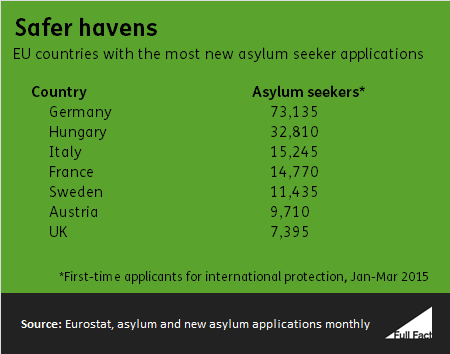 Verdict: True according to the UN Refugee Agency, the figures have already been updated since.

Verdict: True according to latest figures from 2014.

Vacant housing figures from the Department for Communities and Local Government confirm both figures, though the number is falling long-term. In 2004, there were around 320,000 dwellings unoccupied for over six months in England.

The more interesting question is why these figures feature on a blackboard about immigration. We've seen claims before that a new house is needed every seven minutes to cope with immigration, which is plausible although difficult to calculate exactly. So are these 610,000 homes just sitting there waiting to solve the housing 'crisis'?

To an extent, but it's obviously more complicated than that. Local Authorities have some powers to bring empty properties into use but this doesn't happen overnight, and making the process easier remains a policy challenge.