Nigel Farage addressed the UKIP Party Conference this afternoon. Here's our round-up of the key claims:

1. [People are saying] we're taking home less money than we were ten years ago

Partly as a result of trends in falling real wages since 2008, we're actually both earning and taking home about the same as ten years ago.

In terms of what we're earning, real wages (which take rising prices into account) are currently about the same level as they were at the start of 2004. 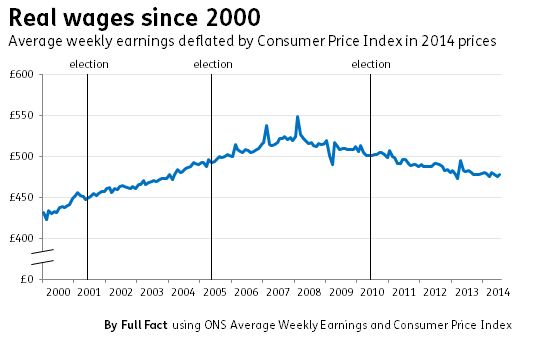 But 'real wages' aren't what people take home — some taxes and benefits play their part as well. A measure of 'disposable income' takes these into account, and this has been stagnating since about 2006. It's currently slightly higher per head than ten years ago, but broadly speaking we're about where we were in 2004. 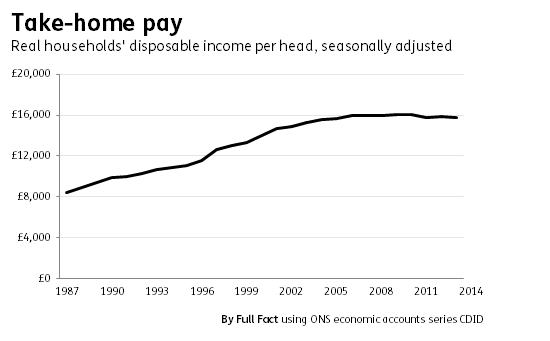 2. Leaving the European Union will save us £10 billion a year, and that's just on the membership fee, let alone the opportunity costs that we will have.

On a calendar year basis, the net contribution by the UK government to the EU budget in 2013 was £8.6 billion, the highest it has ever been. 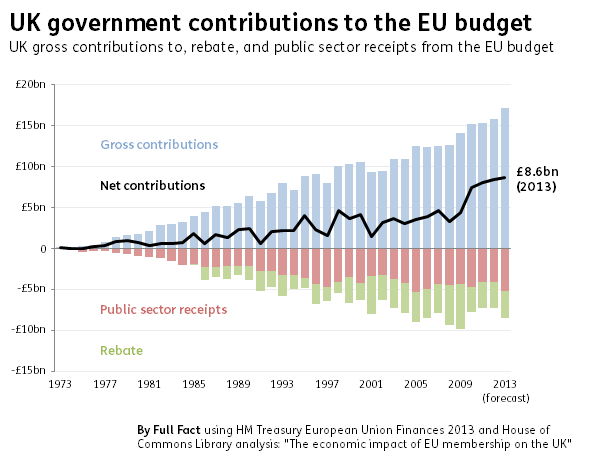 3. I do not believe that Britain's 4.6 million men and women, brave men and women, that are running our small businesses or acting as sole traders, should be made to abide by the same rule book as Unilever and Tesco.

The Department for Business Innovation and Skills estimates that at the beginning of 2013 there were 4.9 million small and medium sized businesses (99% of all businesses). Of these, 3.7 million were businesses with no employees and a further million businesses had fewer than 10 employees - together representing about 4.7 million of these smallest businesses.

Some rules do only apply to larger businesses. For example, private limited companies with fewer than 50 employees and limited turnover or assets are exempt from the audit requirements with which larger companies have to comply and low-risk businesses with fewer than five employees are not required to write down their risk assessments or health and safety policies.

4. What about the collapse in national self-confidence in much of our leadership? You know, with the last Archbishop of Canterbury even suggesting that we should find and accept Sharia law in Britain's cities.

This refers to a radio interview and lecture given by Rowan Williams, the previous Archbishop of Canterbury, in February 2008. He was giving a religious perspective on civil and religious law in England.

In the interview, he was asked:

To begin with you've given this vision of if as a nation Britain wants to achieve social cohesion, that challenge is how to accommodate those of religious faith in relation to the law; and your words are that the application of Sharia in certain circumstances, if we want to achieve this cohesion and take seriously peoples' religion, seems unavoidable?

It seems unavoidable and indeed as a matter of fact certain provision of Sharia are already recognised in our society and under our law; so it's not as if we're bringing in an alien and rival system; we already have in this country a number of situations in which the law the internal law of religious communities is recognised by the law of the land as justified conscientious objections in certain circumstances in providing certain kinds of social relations, so I think we need to look at this with a clearer eye and not imagine either we know exactly what we mean by Sharia and not just associate it with what we read about Saudi Arabia or wherever.

He continued to discuss the topic but didn't specifically relate this or the lecture to Britain's cities other than the context of them being 'socially fragmented'.

Following media reaction, Dr Williams' website clarified that he made no proposals for Sharia in either the lecture or the interview, and didn't call for its introduction as some kind of parallel jurisdiction to the civil law.

5. We cannot go on with situations like English students paying tuition fees because the majority of Scottish politicians voted for them whilst at the same time youngsters in Scotland don't have to pay any tuition fees at all.

In 2004, MPs voted to increase tuition fees from £1,125 per year to £3,000 per year. The Higher Education Bill passed by just 5 votes. Analysis by My Society found that if votes from MPs representing Scottish constituencies had been excluded, the Bill would have been defeated.

That said, we can't know for certain what higher education fees in the rest of the UK would look like if Scottish MPs had been prevented from voting on the issue. For instance had this been the case the remaining MPs might have voted differently.

And more recently, excluding Scottish MPs from the vote to raise the cap on tuition fees to £9,000 wouldn't have changed the outcome according to My Society's analysis.

6. We are the only UK political party with elected representation in all four corners of the Kingdom.

UKIP does have elected representatives in all four countries of the United Kingdom. In the 2014 European election UKIP returned 24 of the country's 73 MEPs, including 22 MEPs for England, one for Wales and the party's first MEP in Scotland.

It doesn't have an MEP for Northern Ireland but does have a Northern Ireland Assembly member in the form of David McNarry. Although he was elected to the Assembly as an Ulster Unionist in 2011 he switched to UKIP in 2012. The main Westminster parties are not represented in Northern Ireland at this level (the NI Conservatives have one borough councillor in Larne).

7. I think the issue that will dominate next year's general election, whether we want it or not, will be the issue of open-door immigration. It will be. And I say that because the figures are getting higher and higher and higher with every single quarter that passes.

Immigration is already seen as the most important issue facing Britain today, so there's some basis for thinking it may dominate next year's election. In fact the proportion of people who say it's an important issue has generally been rising since 2013.

The claim that figures are "getting higher and higher" probably refers to net migration — the difference between people immigrating in and emigrating out of the country. Now at around 243,000, it's been rising ever since the start of 2013 when net migration hit a recent low point of around 175,000. 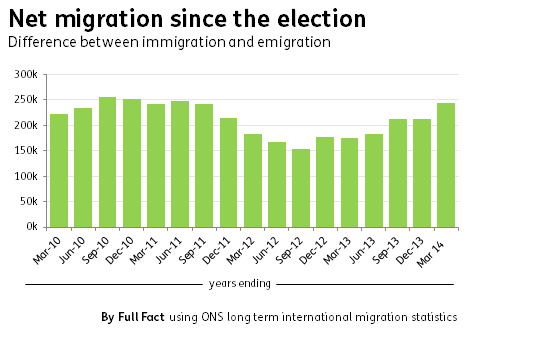