"Councils will send in troubleshooters to sort out Britain's worst scumbags, who cost taxpayers £9 billion a year."

"Mr Pickles said it was time to level blame at 120,000 'troubled families' said to be at the root of high amounts of crime and social disorder... The Government is spending £450million to try to lessen the problems these families cause, which are calculated to cost taxpayers £9 billion a year."

Communities Secretary Eric Pickles appeared on the Today programme this morning to set out his plans to crack down on 120,000 "problem families", which he claimed were costing taxpayers £9 billion per year.

The move - which was widely trailed in the weekend's media - would see £450 million delivered through payment-by-results schemes towards tackling households that Prime Minister David Cameron last year called "neighbours from hell" (although it isn't clear that this is different from the £1 billion announced by the Prime Minister last year in the same speech).

When pushed by interviewer Justin Webb on whether these families were "simply people living in poverty" or if they were those "in trouble or causing trouble", Mr Pickles told Today programme listeners that these households were responsible for high levels of crime, truancy and alcoholism, among other things. This would suggest they were firmly in the latter group.

However it isn't at all clear that this is the case.

The 120,000 figure stems from a 2007 report from the now-defunct Social Exclusion Task Force at the Cabinet Office, which analysed a 2005 Families and Children Study (FACS) survey.

This found that 2 per cent of families - roughly 117,000 in England - were classed as 'Families with Multiple Problems' (FMP). This meant that they fell into at least five of the following seven categories:

• No parent in the family is in work
• Family lives in poor quality or overcrowded housing
• No parent has any qualifications
• Mother has mental health problems
• At least one parent has a longstanding limiting illness, disability or infirmity
• Family has low income (below 60% of the median)
• Family cannot afford a number of food and clothing items.

What is immediately striking about this list is that none of these metrics measures anti-social behaviour of the sort described by Mr Pickles, but rather seems to focus instead on what could be seen as measures of deprivation. To describe these families as "Britain's worst scumbags" (take a bow the Daily Star) seems particularly unfair.

Are there no grounds at all for Mr Pickles' claim?

While the 120,000 certainly doesn't refer specifically to the number of families "causing trouble", there could nevertheless be some correlation between deprivation and anti-social behaviour.

When we look at the source for the claimed cost of these families, this might seem to hold some weight.

Last year the Department for Education looked at the burden placed on taxpayers by 46,000 families with multiple problems, and estimated it to be £4 billion. It is by extrapolating from this figure that the £9 billion cost of the 120,000 families was arrived at.

As we can see, while a significant part of this sum is incurred through the provision of health and education services, over half - £2.5 billion - is the cost of "family breakdown and crises", with truancy, crime and anti-social behaviour all listed as examples of this problem. 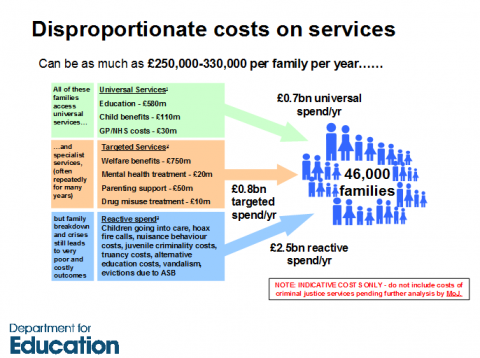 However what we can't tell from this is the extent to which this is an additional burden placed upon the taxpayer by families with multiple problems in particular. For example, we don't know how these costs would compare to the sums spent on providing the same services to other families in similar areas or income brackets.

Are these families costing £9 billion?

However when we look more closely at the DfE figures it casts more doubt on the £9 billion cost attributed to FMP.

This is because, as the DfE itself notes, the 46,000 refers specifically to those families identified not only as having multiple problems, but also as having 'problem' child behaviour:

Some of the £4 billion in costs attributed to these families with problem child behaviour - such as juvenile criminality costs, truancy costs or alternative education costs - may not apply to other families with multiple problems.

What do we know?

It is possible therefore that the DCLG has undertaken a more sophisticated analysis based on the DfE model than merely extrapolating from the headline findings, which may account for the differences between families with multiple problems, and those with problem children in particular.

If this is the case however, it has not been transparently done, and Full Fact will be chasing the DCLG to see if they can provide solid ground for this claim.

In fact, the figure of 120,000 families with multiple problems may substantially underestimate the scale of the problem.

Firstly the source of the estimate dates from 2004, since which point we have had two periods of recession which could be expected to increase the number of families suffering from income-related problems that feature on the FMP 'list'.

But even leaving this aside there are problems with reaching a conclusive number of families with multiple problems from surveys of this sort. As the BBC's More or Less programme found when it looked at the issue last month, the very poorest families are often those that do not respond to surveys of this kind, and may consequently be under-represented in their findings.

In reporting on the supposed 120,000 'problem' families, both the media and Government ministers seem to have fundamentally misunderstood what the number tells us. Rather than this being an identifiable group "in trouble or causing trouble", this figure refers to the number of families identified as having a number of social or economic difficulties or disadvantages.

When it comes to the cost to the taxpayer of providing services to these families, there are also significant questions that need to be answered before we can have confidence in the £9 billion figure. While DCLG have said that analysis done by colleagues in the Department for Education formed the foundations of its estimate, a closer look at the DfE's work shows that it actually concerns only part of this group of families, the minority with 'problem' child behaviour.