Are a million people fit to work yet living on benefits?

"A MILLION welfare claimants have lived on working-age benefits for three out of the last four years, despite being judged capable of trying to find a job." Daily Express, 24 April 2013

"Revealed: The one million people who are fit-to-work but have been on benefits for three years." Daily Mail, 24 April 2013

In a new report on the progress it has made towards its social justice goals, the Government today proclaimed that the UK is now a world-leader in social investment. However writing in the Daily Telegraph, Work and Pensions Secretary Iain Duncan Smith insisted that there was still much work to be done, promising that he would go further to tackle 'benefits culture'.

At the same time, several other papers carried stories highlighting the perceived problem, claiming that there were a million people that had spent at least three of the last four years on benefits despite being fit to work. So is this accurate?

The claims draw upon figures released by the Department for Work and Pensions (DWP) as part of an 'ad-hoc' analysis on the duration of out-of-work benefits claims.

As the table below demonstrates, DWP statisticians have calculated that there are just over one million people who have claimed either Jobseeker's Allowance (JSA) or Income Support Lone Parents for three out of the past four years, or have been in the Work Related Activity Group or Assessment Phase of Employment and Support Allowance (ESA) for the same amount of time. 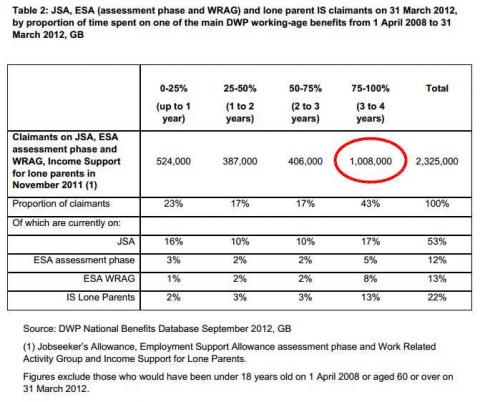 On the face of it, those working-age benefits targeted at people unable to work because of an impairment (such as the Support Group of ESA and Incapacity Benefit) might seem to have been excluded from the analysis, leading the papers to conclude that the remaining million people are "fit-to-work".

However, this isn't accurate.

187,000 of the million people placed in this category find themselves in the "WRAG" - the Work Related Activity Group - as a result of a Work Capability Assessment which tested their eligibility for ESA.

As we've repeatedly pointed out before, these people were not found to be fit for work, but were placed in the WRAG in the hope that they may be able to undertake work-related activities that might help them back into a job at some point in the future.

However it is wrong to describe this group as currently fit-to-work and their eligibility for ESA is not in dispute. The Government has published details on the conditions that entitled Employment and Support Allowance (ESA) claimants to be placed in the WRAG. These included those:

The problems don't end there.

It may seem strange that such a large number of people could have been in the Assessment Phase for three out of the past four years. When we probe this anomaly, further issues arise.

The DWP makes clear in its release that the claims are grouped by the benefit that the person involved is currently claiming, and claimants may have spent much of the past four years on another benefit type entirely. This is particularly relevant for those awaiting ESA assessments. As the DWP notes:

"a person currently in the ESA assessment phase that has spent at least 75 per cent of the four-year period on benefit may have built up the majority of that time while on Incapacity Benefit."

Incapacity Benefit (IB) claimants are currently being reassessed as part of the transition to ESA, and the DWP's own statistics suggest that less than a third of IB claimants reassessed for ESA are found fit to work, and that is before we factor in those that succesfully overturn this outcome on appeal.

This also means that we need to be cautious about labelling even those placed in the JSA and IS Lone Parent groups as "fit to work".

While they may currently be considered "fit to work", it doesn't necessarily follow that this has been the case for the entire duration of their claim over the past four years, and they may have moved quite legitimately from an incapacity benefit to JSA or Income Support.

While the DWP has identified one million working age claimants that have been on benefits for three out of the past four years, the Daily Express and Daily Mail are wrong to claim that they are all necessarily "fit-to-work".

Almost a third of these people have either been assessed for ESA and found not to be fit for work, or are currently waiting to be assessed (of whom we would expect the majority to be found eligible for support). The newspapers would therefore have been on firmer ground claiming that 700,000 were fit-to-work yet living on benefits.

However even this remaining two thirds - those claiming either Jobseeker's Allowance or Income Support for Lone Parents - need to be properly understood. While these benefits are targeted at people who are out of work, rather than those prevented from working by a debilitating condition, it is worth noting that people currently claiming these benefits may have been legitimately considered unable to work at other points in the four year period.

In light of this, we'll be asking each paper to correct the record.