This is uncertain but plausible. That’s according to the Campaign to Protect Rural England’s analysis of English council plans—typically plans for building over the next 15 years. The figures are rough estimates.

Only 22 per cent of homes already granted planning permission in the Green Belt are affordable.

Correct according to analysis by the Campaign to Protect Rural England. Not all homes with planning permission get built, though some of these already have been. Last year in England 19% of all new homes (within and outside the Green Belt) were “affordable”.

“Only 22 per cent of [homes] already granted planning permission in the green belt are affordable”.

Data collected by the Campaign to Protect Rural England found councils plan to build around 460,000 homes over the next 15 years on current Green Belt land. This will be done by removing the Green Belt classification from that land prior to development. We don’t know if these plans will be followed through on and the figures have some margin of error.

The figure has increased since last year, partly because more councils have completed their long-term plans.

CPRE also found that 22% of homes with planning permission for the Green Belt are “affordable” (homes below market value). Some of these homes have already been built.

That’s higher than the rate of affordable home building overall. In 2016/17 19% of new homes across England were affordable. Some people argue that building homes at market value (i.e. not defined as affordable), can still improve the overall affordability of housing.

What is the Green Belt?

The Green Belt is land around major cities in England that is designed to stop urban sprawl as well as safeguard the countryside and historic towns. The government’s planning policy says that: “Inappropriate development is, by definition, harmful to the Green Belt and should not be approved except in very special circumstances.”

What’s happened to the Green Belt?

The Green Belt changes size when councils decide to reclassify land within their remit. That’s usually because councils want to build on it, though that’s not always the case. 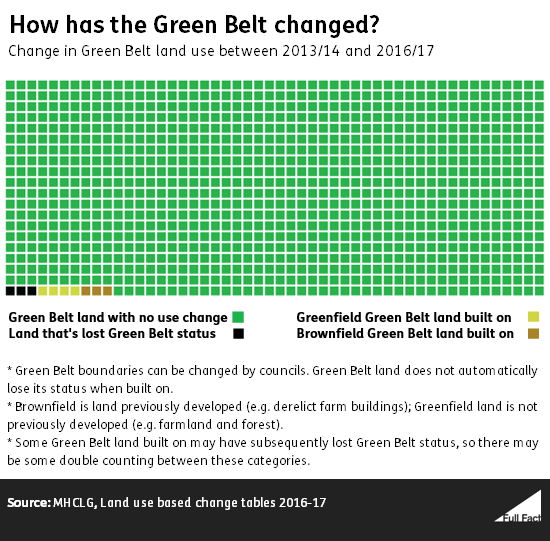 To put that in perspective, imagine the Green Belt was the same size as an A4 piece of paper. Over the past four years, an area of greenfield equivalent to about a 5p coin was built on.

Most of what’s built on the Green Belt isn’t housing—other developments include buildings for industrial or commercial purposes. Over the past four years only 1,600 hectares out of 11,300 was for residential use.

What could happen in future?

It’s difficult to say how much of the Green Belt will be built on in the future.

The Campaign to Protect Rural England (CPRE) said building on the Green Belt could happen in two main ways. The first is that councils could remove Green Belt status from land destined for building. The second is that developers could receive planning permission to build on Green Belt land.

For the first element, the CPRE used local council planning data and calculated that councils plan to remove enough land from Green Belt status to build around 460,000 new homes. This is up by around 35,000 compared to the year before when the estimate was 425,000, though some of this increase may be because more councils have actually finalised their plans in the past year.

The CPRE told us it expects any building to take place in the next 15 years as local plans tend to last that long.

They acknowledged there were some limits to the data, such as the fact that not all councils have produced local plans—for example, Sevenoaks council proposed up to 6,800 homes on the Green Belt following the report’s publication.

We have some concerns that, conversely, some of the figures are overestimates. For example, this development of 65 homes in North London is included in CPRE’s figures, but the area is adjacent to the Green Belt, not within the Green Belt. One of the largest homebuilders in CPRE’s figures is Dacorum Borough Council who CPRE say plan to build 14,360 homes on the Green Belt. That is the highest of seven options and hasn’t been confirmed.

Ultimately data on local plans should be treated with caution.

As for planning permissions within the Green Belt, the CPRE hired consultants, Glenigan, to measure the number of planning applications approved within current Green Belt land.

It found that in 2017/18 planning applications for around 4,000 homes and 190 commercial and industrial buildings on Green Belt land were approved.

Using planning permissions data to estimate future building is problematic because plans don’t always materialise and more than one permission can be held for each building.

So what does that all add up to?

Putting aside caveats with the data, we can use it to estimate the area of Green Belt land we may lose to new building. This is very rough and illustrative and doesn’t include land that councils may remove from the Green Belt for non-residential purposes.

But we calculate that building on the Green Belt (or the loss of land previously with Green Belt status) could amount to around 3,600 hectares a year in the future. That’s about a fifth of a percent of the Green Belt’s current area per year.

While a rough estimate, that’s in line with what’s actually happened to the Green Belt in the past four years. Over the last four years, an average of 3,900 hectares of Green Belt land has been built on or lost its Green Belt designation each year (though there may be overlap between the two).

We calculated the estimate as follows:

Secondly, there’s the homes that have planning permission to be built on the Green Belt itself. In 2017/18 4,000 homes had planning permission approved. Assuming they get built, and that number remains stable, that adds up to another 190 hectares a year. That’s using the government’s measure that in 2016/17 new developments in the Green Belt were built at a density of 21 per hectare.

How affordable are Green Belt properties?

Data shared with us by the CPRE suggests that councils aim for 32% of housing in current Green Belt land to be affordable. This excludes councils who have not included affordability targets (14 of the 98 councils).

Affordable housing is designed to meet the needs of people who can’t afford housing at market rates. It’s defined as any house that is ‘social rented’, ‘affordable rented’ or ‘intermediate’, which in essence means its cost is held low by rent controls or guideline levels set locally and nationally.

If accurate, this provision of affordable housing is slightly higher than in England generally. In 2016/17 19% of new houses were affordable.

Also some argue that housing need not be “affordable” for it to improve the general affordability of housing. For example analysis by the Ministry for Housing, Communities and Local Government found that, all other things being equal, an increase in housing supply generally would reduce prices.