This article has been updated to reflect BBC News's correction.

One of the week's big stories is, somewhat improbably, milk.

In factchecking claims about milk prices (more on that to follow), we came across this infographic, accompanying a BBC story. It doesn't make much sense to us. 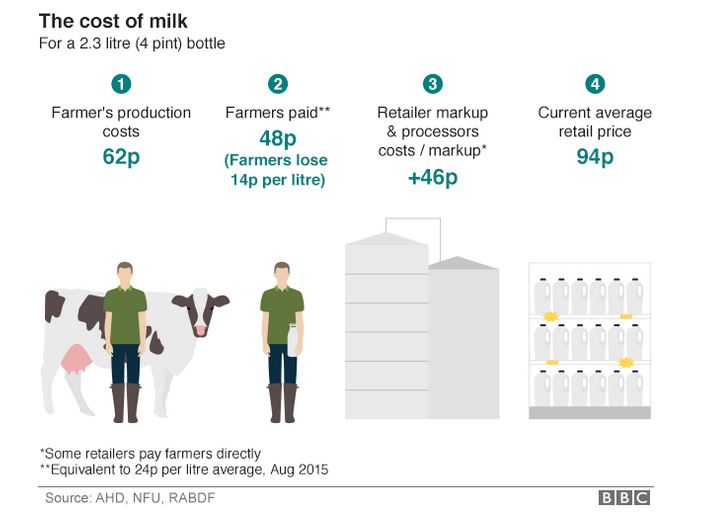 The graphic claims to show the production costs, farm gate price, mark-up and ultimate retail price of 2.3 litres (or 4 pints) of the white stuff. It apparently costs 62p to produce on the farm, but is bought for 48p, resulting in a loss for the farmer.

It then says that this loss is 14p per litre—the difference between 62p and 48p—but that can't be right if we've been talking about 2.3 litres. The 14p disparity for 2.3 litres of milk would actually work out at around a loss of 6p per litre.

That's what the text of the story suggests:

"The average UK farm gate price—which is the amount paid to farmers—fell to 24.06p per litre in May, a decrease of a quarter over 12 months.

Farmers estimate it costs 30-32p to produce each litre of milk."

All this is assuming that the underlying figures are correct, which we're also looking to confirm. The BBC's numbers for the average farm gate price and average retail price look about right, at 24p per litre and 98p per 2.3 litres respectively, but we haven't been able to track down a widely quoted figure of 30-32 pence per litre as the cost of production.

One outlet has reported it as an anecdotal estimate from AHDB Dairy, which represents dairy farmers, rather than a firm figure. AHDB does give a figure of 30.5 pence per litre for the 25% of farmers making the least margin on their milk, but says that these numbers are "indicative of change and not aimed at giving absolute values".

In the meantime, we've asked the BBC to explain or correct their infographic.

Within half an hour of us pointing out the mistake, BBC News kindly corrected their infographic.