Is the Coalition spending more than ever before on flood defences?

"We are spending £3.2bn over the course of this parliament on flood management and protection from coastal erosion. That is more than ever before." Dan Rogerson, quoted in the Guardian, 17 June 2014

A committee of MPs made a splash today by suggesting that river maintenance funding was at a "bare minimum", and that government needed to direct more money towards flood prevention to avoid a repeat of the damage caused by last winter's floods.

In the Guardian, Environment Minister Dan Rogerson was quoted as saying that the government was already taking action to prevent this, spending "more than ever before" on defences.

Figures published by Defra only stretch back as far as 2005, and do suggest that £3.2 billion has been set aside over the five years of this parliament for flood and coastal management. In real terms this is slightly more than was spent over the five years of the previous parliament, although spending in 2010/11 is contested since it was allocated as part of the previous government's plans.

Mr Rogerson's claim that £3.2bn will be spent on flood and coastal defences between 2010 and 2015 can be found in the figures in today's Environment, Food and Rural Affairs Committee report, which itself uses data published by the government. These show that between 2010/11 and 2014/15, the Coalition government will have spent £3.22bn on flood management. 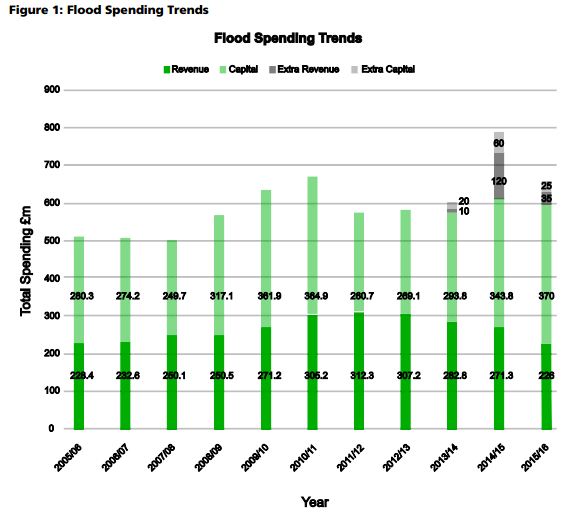 An extra £220m has been added to the budget for the 2013/14 and 2014/15 financial years in the wake of this winter's floods. This has a big impact when comparing the total spent in this parliament with the amount spent in the last.

Before this additional spending was announced, about £3bn was spent in both periods in 2012/13 prices. The additional £220m tips the scales in the Coalition's favour in real terms.

However whether the present government can claim credit for the higher spending in this parliament is contentious. Spending during the first year of this parliament was based on the spending plans of the previous administration. That's why some — including the Environment Secretary earlier this year - prefer to compare the current spending review period (2011/12 to 2014/15) with the previous four year stretch of Labour's funding plans.

Looking at the figures this way reveals that spending on flood and coastal management under the previous government's plans was roughly equivalent to the sums allocated to it by this government: £2.56bn was set aside for 2007/08 to 2010/11 compared to £2.52 for the spending review period 2011/12 to 2014/15.