Update: This piece has been updated to include responses from the Conservative Party and Facebook.

A Conservative Party Facebook advert seems to have altered the headline of a BBC News article on an education spending announcement to make the government appear more generous than it is being.

Since we first published this fact check, a Conservative Party spokesperson told the BBC: “It was not our intention to misrepresent by using this headline copy with the news link, where the BBC’s £7bn figure is clearly displayed, but we are reviewing how our advert headlines match accompanying links.”

A BBC spokesman said: “We are looking into this matter.” Facebook has now deactivated the ads in question.

What’s the story all about?

Earlier this month we wrote about a claim made by the government that spending on primary and secondary schools was being increased by £14 billion over the next three years. This is an unhelpful figure for two reasons. For one, it does not account for inflation. Also, it adds together all of the increases in spending for every year between now and 2022/23 (so the increase between 2019/20 and 2020/21, as well as 2019/20 and 2021/22, and so on.) The standard practice for discussing spending changes is to talk about them on a per year basis.

While it’s not technically inaccurate, it may well be misleading—because this isn’t how people normally talk about spending increases, it makes the figure seem comparatively much larger than it really is.

The figure was then used in an ad campaign run by the Conservative Party on Facebook.

These ads varied slightly but most said “We’re giving schools a record £14 billion, levelling up per pupil funding across the country.” We’ll have more on the ‘record’ and ‘per pupil funding’ claims soon.

Some of the ads linked to a page on the Conservative party website about the announcement. Others linked to a BBC News article about it. 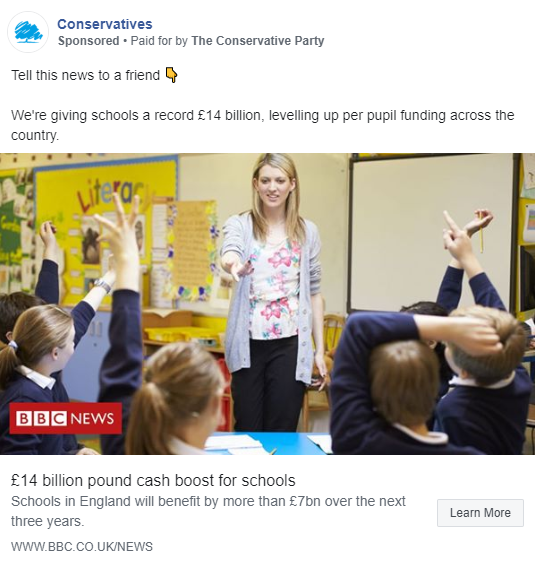 However, this BBC article and the Conservative Party Facebook ad linking to it had a crucial difference—the headline.

The BBC News article’s headline is ‘School spending: Multi-billion pound cash boost announcement’. The article then goes on to make clear that the £14 billion figure is “not normally how we talk about spending increases” and would “make the government seem more generous than it is in fact being.”

But if you were looking at the ad the Conservative Party posted, you would have been forgiven for thinking that the BBC headline actually read “£14 billion pound cash boost for schools”.

We spoke to the BBC who told us that the headline on the article has never changed and so has never referred to the £14 billion.

The only slight change that the BBC headline has undergone was on the very first day  the article was published, at that time the headline read “Multi-billion pound cash boost given to schools.”

We asked the Conservative Party whether it altered the headline for the purposes of the ad. Beyond an initial comment saying that it was “looking further into this” we did not receive a response, but the party later told the BBC it had not been the party’s intention to misrepresent their work and it was reviewing how it presented advert headlines.

Facebook also told the BBC that it was "working to put safeguards in place to ensure publishers have control over the way their headlines appear in advertisements" and that by the end of the year it would make changes to prevent advertisers from changing headlines and links to other people’s stories.

Altering a headline like this is misleading, particularly for readers who don’t click through to the article. It makes it appear that the BBC endorsed the £14 billion figure, when in fact they criticised it.

It’s inappropriate for political parties, or any public body, to misrepresent the work of independent journalists in this way.

As of Friday 13 September, the various versions of the ad containing the altered headline had received somewhere between 222,000 and 510,000 impressions since 2 September. An impression is the number of times an ad appears on a screen and these numbers can includes multiple views by the same person.

We updated this fact check to incorporate the Conservative Party's response to BBC News saying that they are reviewing how advert headlines match accompanying links.

We updated this article to include comments from the Conservative Party, the BBC and Facebook that were given to the BBC after it was published, and to reflect that Facebook has deactivated the ads.

We updated this article to clarify that while the BBC headline has never changed in its description of the spending increase as a multi-billion increase, the phrasing of the headline did change slightly shortly after publication.