Since 2000, almost as many British military personnel have died in training or exercises as were killed in Iraq.

Correct, although some deaths may not have been directly related to the training.

"Try this on for size, this figure truly shocked me. Since 2000, 135 military personnel have died while taking part in training and exercise… In Iraq, we lost only slightly more than that, just over 150 lives. We're killing almost as many of our own with training."

These figures are mostly correct, although not all deaths recorded during military training could necessarily have been prevented. Causes include things like medical conditions and car crashes that also cause fatalities in civilian life.

“Between 1 January 2000 and 31 October 2015, 134 UK Armed Forces personnel died whilst on training and exercise”, according to the Ministry of Defence.

In addition, Joshua Hoole, a corporal in the Army, reportedly died during a training exercise in Wales on 19 July.

The number of deaths “as a result of hostile action” in Iraq is almost exactly the same (136). Including all causes of death, 179 members of the armed forces died in Iraq. This was, however, over a shorter period of time, as UK military operations began in 2003 and mostly ended in 2009.

The reason for Corporal Hoole’s death isn’t yet known. But the reasons for most other training deaths are recorded.

They include causes specific to armed forces exercises, such as “live fire” and various types of “adventure training”, but also crashes and deaths from diseases that may not be a direct result of how the training is carried out. 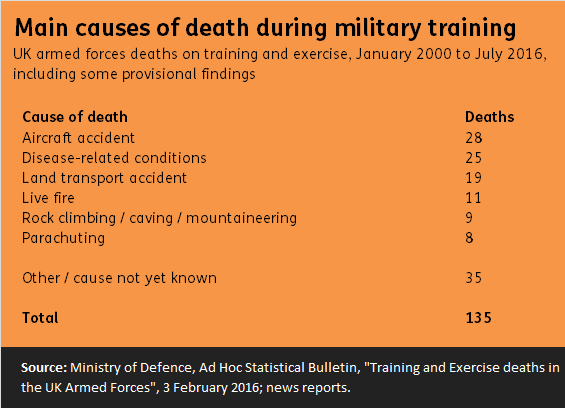