670,000 people marched for a People’s Vote in London on Saturday 20 October

This is an estimate by the organisers of the march. We can’t say for sure if it’s accurate or not, but it may be on the high side.

Last Saturday, protestors marched in London to call for a ‘People’s Vote’ on the final Brexit Deal. The organisers claimed that an estimated  670,000 people marched, and we’ve been asked by readers to check this claim.

The reality is that it’s really hard to accurately measure crowd sizes at non-ticketed events. That said, our crude estimate is that, based on available evidence, it looked like around 450,000 people were present at the start of the march.

That doesn’t account for people outside the official march route, or who joined along the route or to hear speeches at the end.

That means we can’t say that 670,000 is wrong as an estimate, although from what organisers have told us about how they came up with their estimate, we suspect it might be on the high side.

We’ve asked experts in crowd science at Manchester Metropolitan University to help us estimate the size of the crowd, and will update this piece when we hear back.

How did we make our estimate?

Looking at overhead imagery is a common way to estimate the size of a crowd, but one of the problems with marches is that they’re fluid, and not necessarily consistent in density throughout.

Luckily in this case, we were helped by the fact that the start of the march was delayed, so the main mass of marchers were all gathered in a space from Marble Arch down Park Lane and south to Wellington Arch.

We then digitally sketched that area out and found it covered roughly 100,000m². The aerial imagery showed people packed in very tightly at points, but sparsely at others, and some areas were altogether inaccessible. Therefore we estimated that the area was occupied on average by 3 people per square metre , giving an estimate of 300,000.  These images indicate what that might look like: 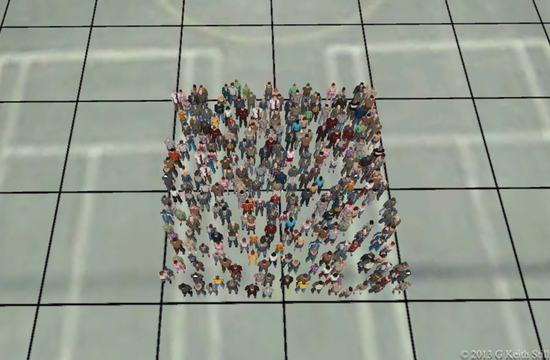 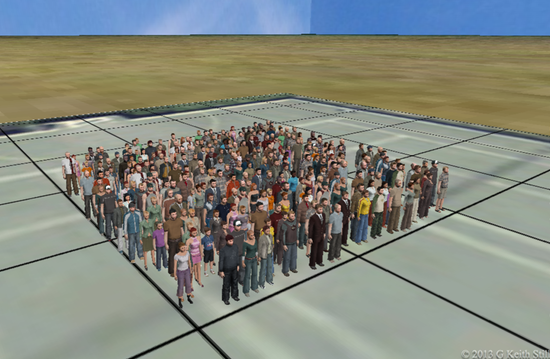 We don’t have footage of the rest of the route that early in the march (although we can see what areas like Trafalgar Square and Whitehall looked like about half an hour in). Based on all that footage, we estimate that the route past Park Lane up to Parliament Square was occupied by, on average, 2 people per square metre at the start of the march.

This doesn’t mean we think the 670,000 estimate is necessarily wrong though. The organisers told us that people also gathered outside the official route.

Also, regardless of how many people were in attendance when the march started at 1.23pm, it’s plausible that more joined further along the route, or just at Parliament Square for the closing speeches.

Though we can’t say that the 670,000 figure is incorrect, there are parts of the People’s Vote estimation methodology we do disagree with. We’ve largely followed the same approach as them, but think they may have somewhat overestimated the density of the march.

They also said that at around 1.30pm Trafalgar Square was completely packed with people, when footage from roughly 1.45 suggests this wasn’t the case.

Why is it difficult to measure crowds?

One common method for estimating the number is called the Jacobs method. You simply divide a crowd area into sections, determine the average number of people in a section, and then scale that up. That’s provided you have good enough aerial images to show the size and density of a crowd.

Ideally to estimate a crowd using the Jacobs method, you’d have high quality aerial images of the entire crowd, which unfortunately are not available for the People’s March.

Even with these, the Jacobs method isn’t perfect for various reasons. You can never be sure if the average number of people per section you’ve used is representative of the whole crowd (i.e. it could be much denser or much less dense than the crowd average).

And the method assumes that people are static which isn’t that helpful when measuring crowds at marches, like the one on Saturday, because people aren’t necessarily all in the same place at the same time.

Unfortunately the Manchester Metropolitan University crowd science team are too busy with other projects.