Did female unemployment rise under Labour?

"Unemployment of women went up 24 per cent under Labour."

With David Cameron in the United States to discuss Afghanistan and Syria with President Obama, Deputy Prime Minister Nick Clegg filled in at the despatch box for this afternoon's PMQs.

Ms Harman singled out rising female unemployment, but the Lib Dem Leader responded by claiming that the problem was one of Labour's own making.

So did unemployment among women rise by 24 per cent under the last Government, as Mr Clegg said?

Looking at the figures published by the Office for National Statistics this morning, it is not difficult to identify the source of his claim.

However it should also be noted that, over this period, the total number of working-age women in the UK rose by over one million (from 17.1 million to 18.2 million). Mr Clegg's claim doesn't therefore necessarily reflect a rise in the prevalence of female unemployment.

However this is also measured by the ONS, and is reported as the female unemployment rate (proportion of economically active women classed as unemployed). 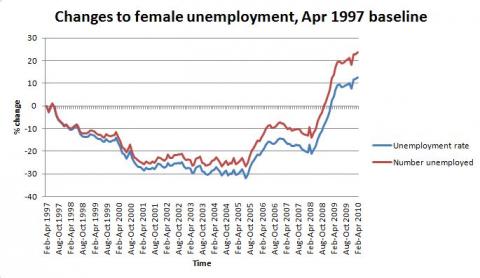 The figures also show that the rise has not been a consistent one. The female unemployment rate was actually falling in the early part of Labour's period in office, hitting a record low of 4.3 per cent in 2005, before rising again, particularly in the wake of the financial crisis of 2007.

Furthermore, it is also true that the employment rate for women rose between 1997 and 2010.

While this may seem contradictory, this is because the proportion of women considered economically active, and therefore eligible to be classed as either employed or unemployed has also risen over this period.

Nick Clegg can support his claim with the official unemployment data by pointing to a 23.6 per cent rise in the number of women classed as unemployed under the previous Labour Government.

Unemployment figures are often presented in isolation without the corresponding figures for employment. The unemployment rate — perhaps the more representative measure as it accounts for the relative size of the potential workforce — also shows a rise in female unemployment over the period, albeit a more modest one.