13 October 2010
Westminster was this afternoon abuzz with evaluations of Ed Miliband's inaugural performance at the Despatch Box during Prime Minister's Questions.   Seeking to attack the new Opposition Leader's early defence of the so-called "squeezed middle", the Prime Minister David Cameron accused Mr Miliband of ignoring this group when in power.   The claim   Responding to Mr Miliband's final question, the PM said:

"He has suddenly discovered middle-income families. We're now hearing about the squeezed middle. Who is it who squeezed them, who is it who doubled the council tax?"

But has council tax increased by quite this much since 1997, and is it fair to blame the Labour Government for it if so?   Analysis   Figures published by the Department for Communities and Local Government (DCLG) show that there has indeed been a doubling since Labour took power in 1997.   The average council tax paid per dwelling has risen from £564 in 1997-98 to £1,195 in 2010-11, an increase of 112 per cent. When measured as the Band D average, another common indicator, bills have increased from £688 in 1997-98 to £1,439 in 2010-11, a rise of 109 per cent.   However as the Government's own Minister David Willetts pointed out on yesterday evening's Newsnight, it is not always fair to compare nominal values over long periods of time, as money depreciates in real value due to inflation.   When considered in real terms, there has been a 40 per cent growth in the average council tax bill per dwelling, with the average Band D property charges increasing slightly more, at 68.6 per cent growth on 1997 bills.   Whether or not the Labour Government can be held solely responsible for these rises, whatever their size, is also a contentious issue. Whilst the money raised through the council tax is distributed by DCLG, the rate of council tax itself is determined by local authorities, not by central government.   Furthermore, a closer inspection of the DCLG data reveals that the decisions behind council tax rises were not the responsibility of just one party.   Of the five local authorities to have raised council tax the most since 1997, the Conservatives have held control of the council throughout the period on three, and have held it for at least part of the time on the remaining two.   By contrast, of the five local authorities to have issued the smallest rises in council tax, the Conservatives have controlled only Hammersmith and Fulham since 2006. The Labour Party has held three of these councils for at least some period of time since 1997, with the remaining council, St Helens, under No Overall Control. 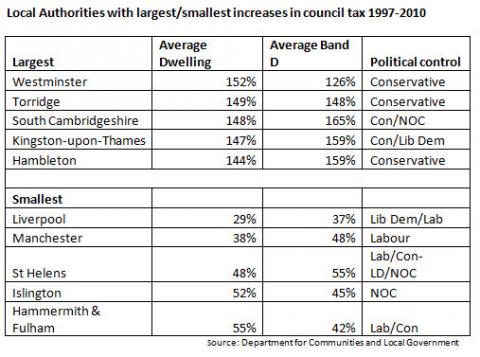 Conclusion   Whereas the nominal increase in council tax bills is of the order of magnitude suggested by David Cameron, this cannot be said of real terms rises. Furthermore, there remains enough complexity in the issue to make attributing responsibility a more complicated job than Mr Cameron allows for in his statement.   Whilst the Conservatives can undoubtedly point to the influence of central government policies on these rises, Tory councils can be seen to have had some influence on the trends in council tax rates.   The Coalition is seeking to reform and cap council tax bills, therefore it is important that claims reflect the nuanced and localised context to which council tax is necessarily attached.