Do England and Wales imprison more children than any other countries in Europe?

Currently, the age of criminal responsibility in this country is 10 years old. Children aged between 10 and 17 can be prosecuted for a crime, yet are treated differently from those who are aged 18 and over. For example, they are sent to secure centres as opposed to adult prisons.

At first, it appears that Mr Sheerman quoted the claim from a Parliament briefing paper, which is attributed to a seminar entitled "The age of criminal responsibility" from a 2009-10 All Party Parliamentary Group for Children lecture session. Full Fact contacted Tim Bateman, a speaker at the seminar, who pointed us towards the statistics behind the claim, which can be found in a 2008 journal article, "The punitive turn in juvenile justice" by Professor John Muncie: 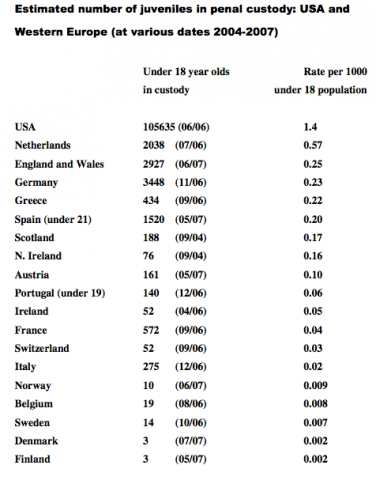 But, as the table suggests, these figures are estimates based on data collated at various dates from 2004 to 2007. The article itself recognises that "there are of course good reasons to remain cautious (if not dismissive) in 'reading' such statistics". For example, some countries "do not have any reliable statistical record of who they lock up and where". Professor Muncie also says that in Spain and Portugal, there are no data specifically on those under 18 year old. On this basis, Mr Sheerman's claim must be approached with caution.

Mr Sheerman's claim is likely to be out-of-date as well, considering how the number of children in custody has decreased over recent years (see graph below).

Age of criminal responsibility in Europe:

It's interesting to note that England and Wales has one of the lowest ages of criminal responsibility in Europe, which has attracted much criticism. In February, Thomas Hammarberg, the (now former) Council of Europe Commissioner for Human Rights raised the issue in a letter to the then Justice Secretary Kenneth Clarke:

The countries mentioned in Mr Sheerman's claim have the following age of criminal responsibility:

Mr Sheerman's claim is likely to be out-of-date. There is no recent comparable data for Portugal, Belgium and Finland, yet there is new data available for the number of children in custody in England and Wales. There is also the difficulty of comparing countries with different ages of criminal responsibility. As for England and Wales however, the debate on the age of criminal responsibility is set to continue.