Often the article doesn’t actually say what the headline promised. We call this an ‘edline’.

It isn’t easy for journalists to reduce an article to a headline of just a few words. Often something important goes missing, or they end up saying something else by mistake—as Yorkshire Live did recently when announcing a list of the most unhygienic businesses in Kirklees.

The headline accompanies an article which lists all the restaurants given zero or one star ratings in Kirklees, but at first glance, this looks like every single business in Kirklees has poor hygiene—which is certainly not true!

Often a misleading headline might apply to the whole country. For example, last May, a headline in the Independent said: “France sees 70 cases linked to schools days after reopening”. At the time, with schools reopening in Europe, and about to reopen in the UK, there was some concern that this might cause a resurgence of Covid infections, which this headline suggests was happening.

However, the article itself provides some vital missing context lower down, explaining that these people were “likely” to have been infected before France’s schools actually reopened. In other words, they may have involved people who were staff or pupils, but they were probably not “linked” to the fact that schools had reopened at all. 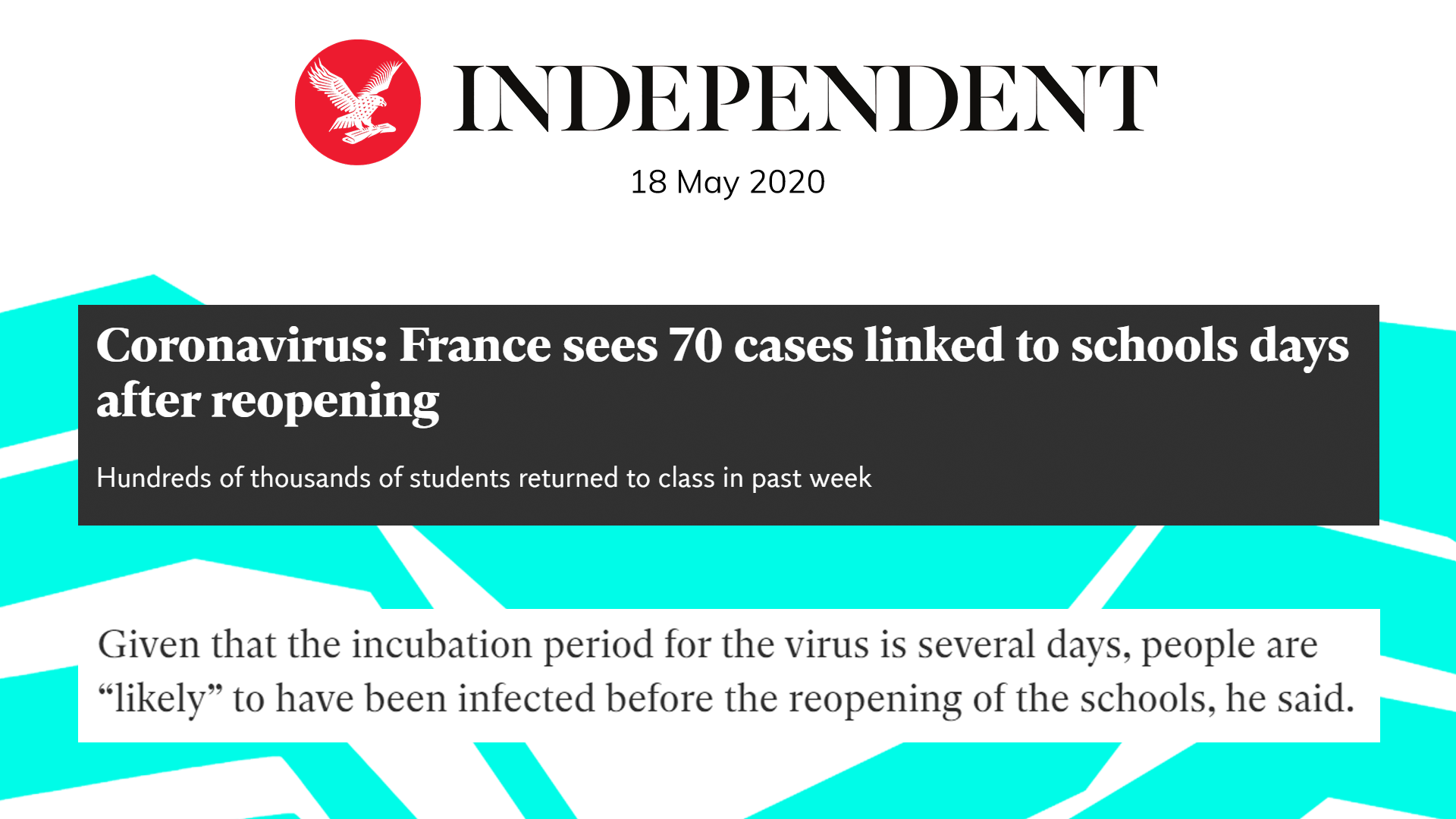 Sometimes the contradiction between the headline and the rest of the piece hides in plain view. Last May, a MailOnline headline said “Coronavirus IS causing deadly new inflammatory fever in some children”—but just three bullet points below, the “IS” turned into “may”. So at the time the scientists, unlike the headline, were not sure. 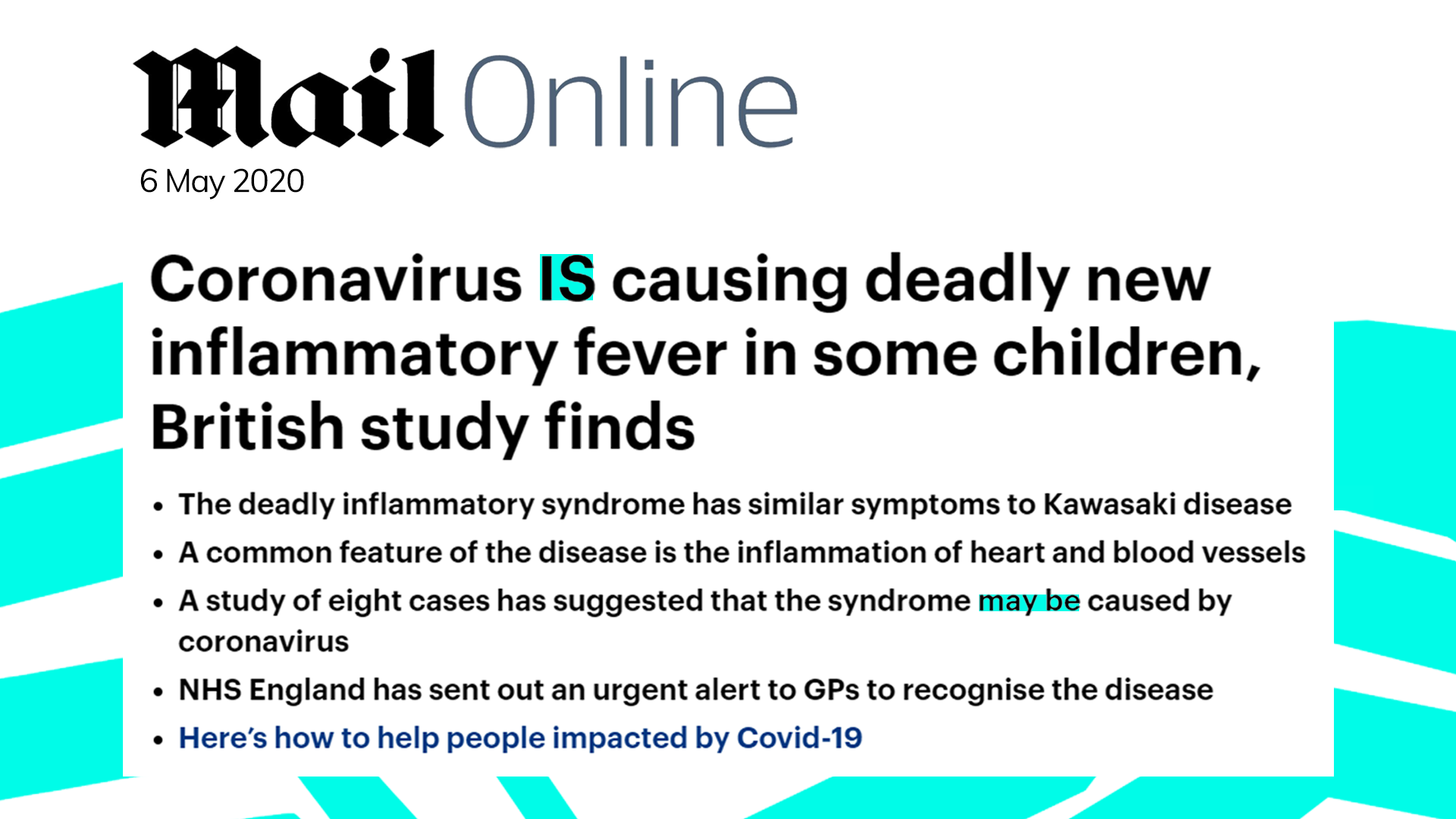 These newspapers could say in their defence that all the information was in the article, eventually. And in libel cases, judges normally do assume that a “reasonable person” reads the whole article. In reality, however, we know that they often don’t.

Most of us probably know this from our own experience. Both in newspapers and on social media, headlines serve as a kind of menu, allowing us to judge from brief descriptions which articles we want to read. In the process, we get snippets of information about many different things, but nobody has time to read them all in detail.

There’s a certain amount of research supporting this, insofar as we need it. For instance, a survey of 1,492 American adults in 2014 found that 58% did not watch, read or hear any news beyond the headlines in the previous week. (Whereas 88% said they did enjoy keeping up with the news.)

There’s also plenty of informal data from the colourful history of pranks and accidents to demonstrate that people very often share or comment on articles that they haven’t read in full. In 2017, the White House shared an article with a headline that appeared to praise President Trump, apparently without realising that it was in fact a satirical attack on his policies.

On April Fools’ Day 2014, the US broadcaster NPR published an article with the headline “Why Doesn't America Read Anymore?”. This received many comments on Facebook from people joining, or challenging, what they believed was a lament for the death of reading—and thereby proving that they hadn’t read the article themselves, because it was in fact just a few short sentences about people commenting too hastily. 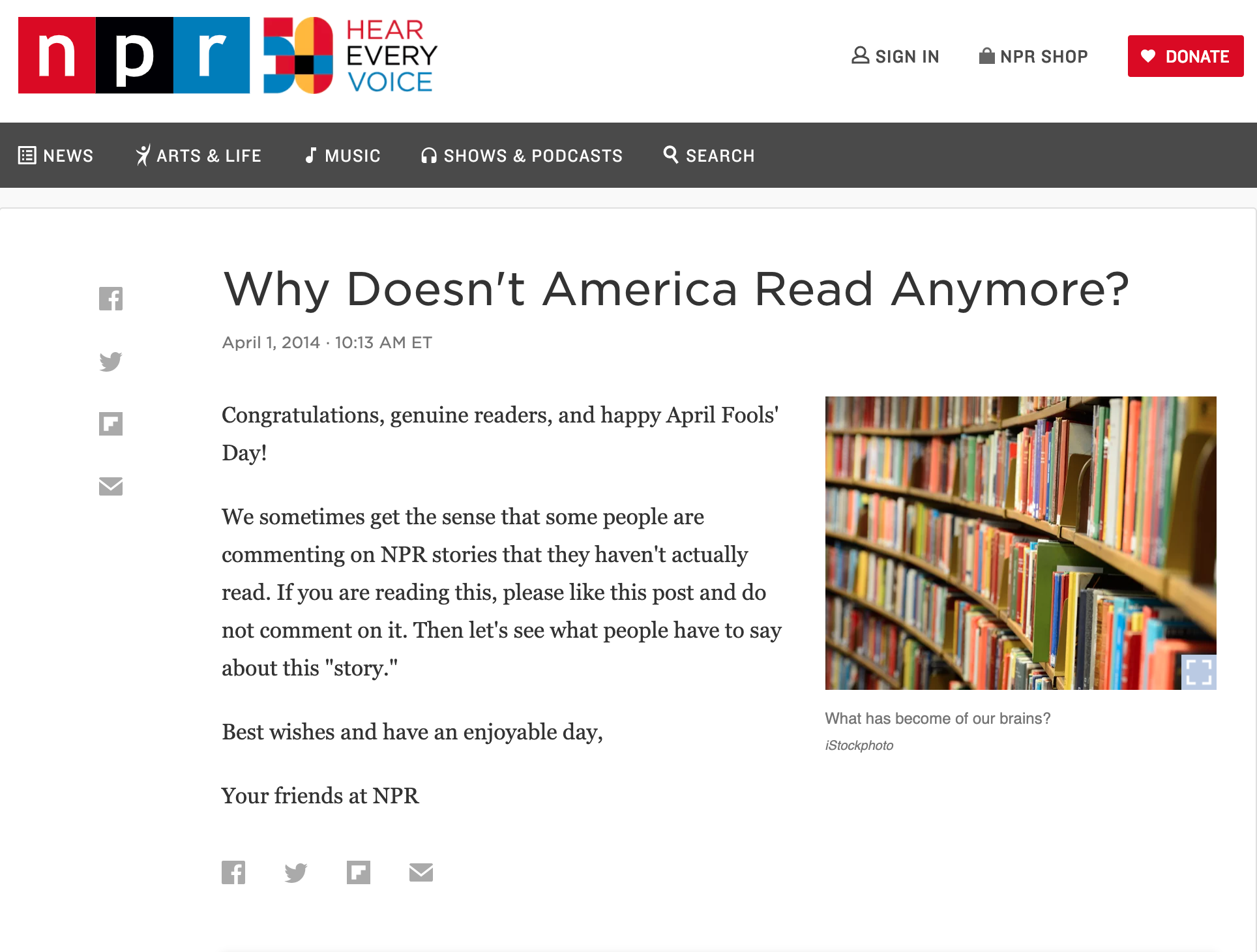 It is easy to blame readers for this kind of thing. And of course, it is always a good idea to take a moment to read and reflect before sharing something. Indeed, both Twitter and Facebook have recently begun encouraging their users to do this.

Headline-writers must also pause, however, and consider whether they are really living up to their readers’ trust. People are entitled to expect truthfulness on every part of the page, so the media must stop misleading them with what we call “edlines”: headlines that don’t accurately reflect the article beneath them (because it is often the editor or subeditor who put them there.)

We see edlines all the time. After all, journalists under pressure to write something short and enticing must often be tempted to simplify the story slightly. And to be fair, if the story is complex, it is always easy to miss some of the finer points. But this still can be seriously misleading, especially during the pandemic, when the world is often desperate for simpler answers than reality provides.

For example, “If you snore you could be THREE TIMES more likely to die of coronavirus,” a headline in the Sun said last September. But in fact, as the article explained, it was only people diagnosed with obstructive sleep apnoea who might have been at higher risk, according to the research, not people who snore for other reasons, such as their sleeping position or the shape of their airways. 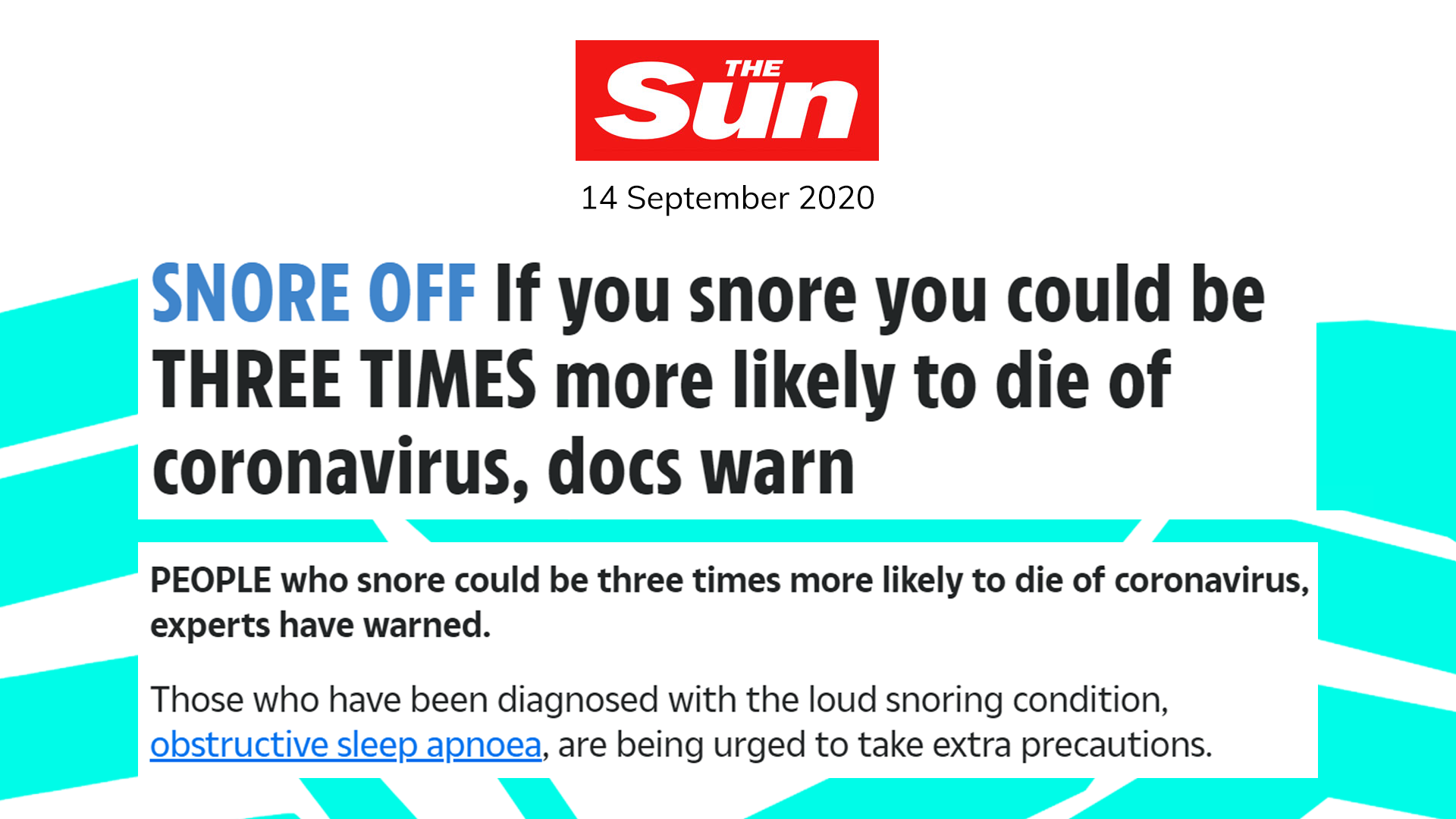 Some edlines carry an air of wishful thinking. On 9 April, part of the headline on the front page of the Daily Mail said: “Travellers set to get free [Covid-19] test kits”. If true, this was important news. Arranging tests abroad may be a complex and expensive process. Some people may even have booked holidays in the belief that they would not have to do it. But this wasn’t even what the article itself was saying. 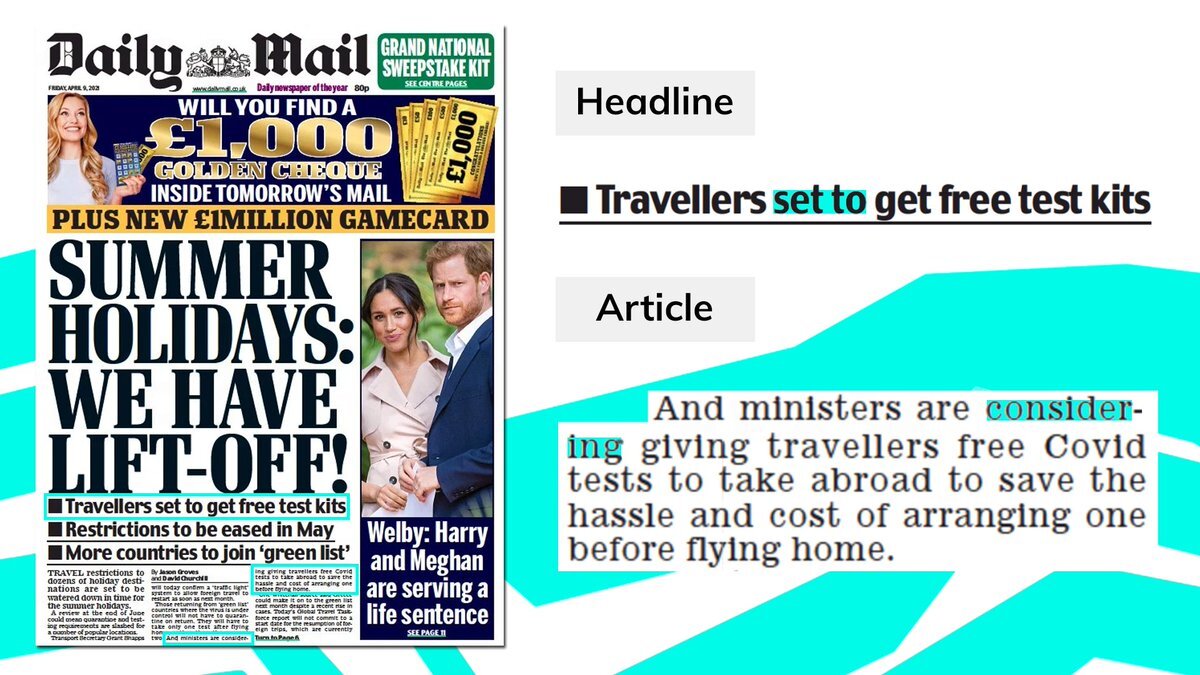 Anyone who read down to the middle of the fourth paragraph found out that “ministers are considering giving travellers free Covid tests”. This is the difference between a yes and a maybe, which of course can be a very large difference indeed. (And at the time of writing, seven weeks since this article was published, people still have to pay for a Covid test before returning to England.)

At other times, the most important information in the article seems almost bizarrely buried at the bottom of it. Last December, RT.com (a Russian state news site in English) published an article with the headline: “Austrian lawmaker tests cola for Covid and claims POSITIVE result returned shows testing is ‘worthless’”.

But you have to scroll all the way down to the final paragraph of the RT.com article to find any hint of this, when it eventually says: “According to German’s [sic] Die Welt newspaper, the Austrian lawmaker administered the test incorrectly, skipping an important step before checking the sample for the virus.” 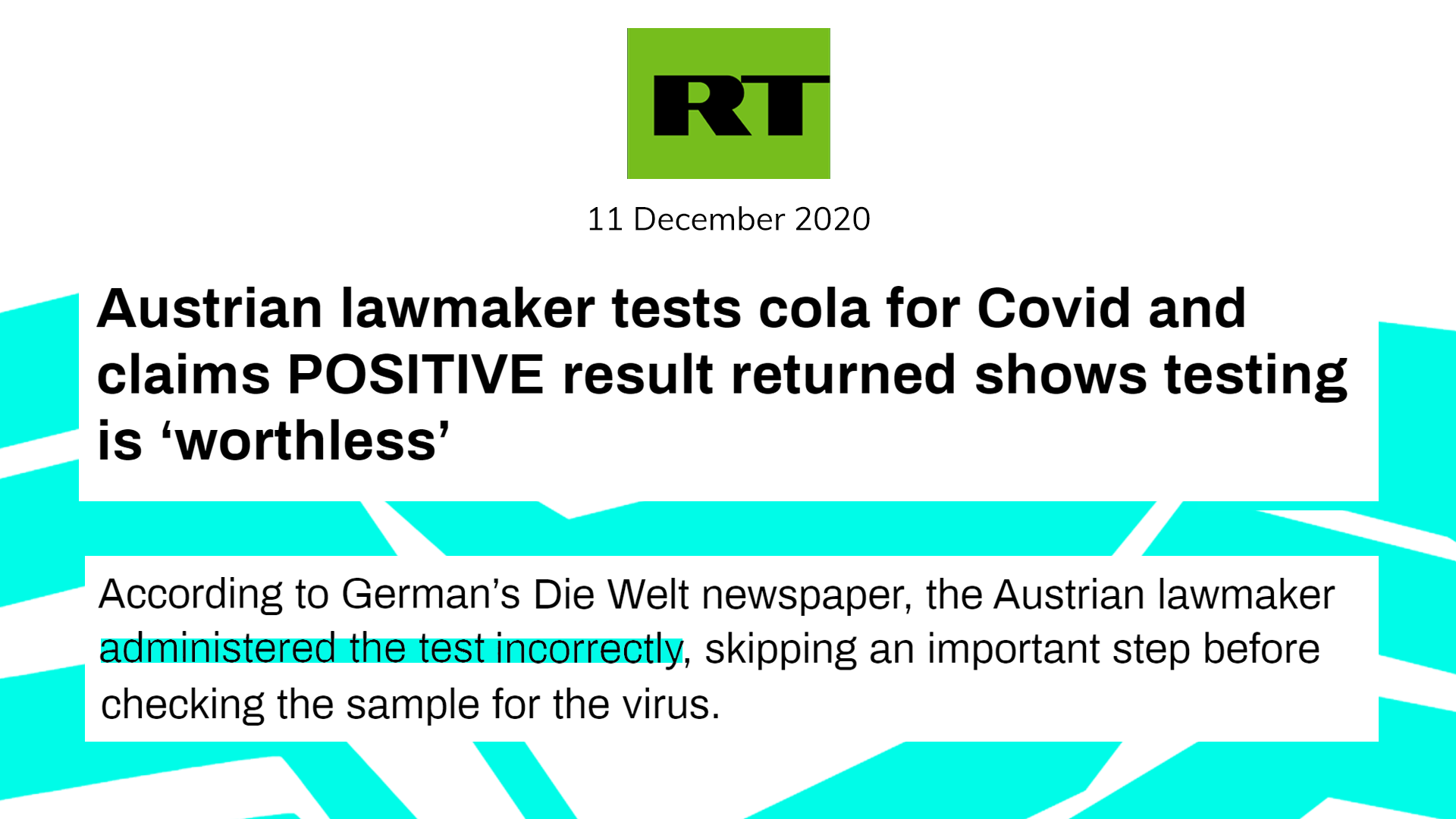 An edline can be particularly damaging when the article describes the views of an expert or public figure, whose opinion is itself an influential piece of evidence for many people.

In November, for instance, the Guardian headlined an article about the statistician and SAGE participant Professor Sir David Spiegelhalter with the words “England lockdown was needed but graphs were a mess, says statistics guru”. 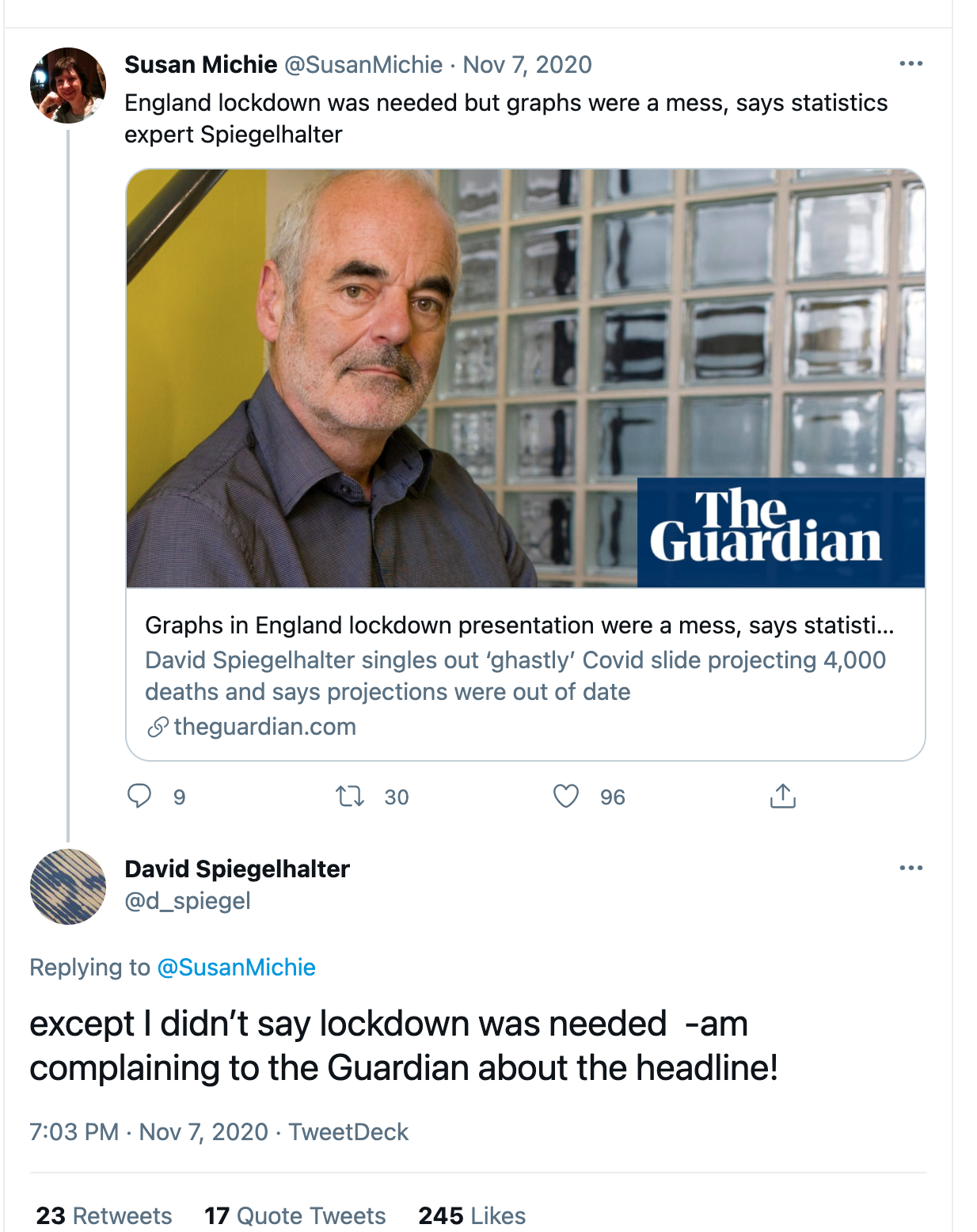 To be fair to journalists, they themselves may sometimes be misled by edlines on press releases. In October, a University of Warwick headline said: “‘Eat Out to Help Out’ scheme drove new COVID-19 infections up by between 8 and 17%”.

In fact, as we explained later in an article, this was a misunderstanding of the research itself. The Warwick release goes on to say: “Between 8 and 17% of the newly detected COVID-19 infection clusters can be attributed to the scheme.” However, this does not mean that overall infections increased by that amount. This error may have led several outlets in the media to make the same claim.

Headlines may only be a tiny part of the article, but they are often the only part that people read. This makes them real misinformation capable of real harm.

Right now, it seems that some of the people writing edlines do not take this seriously, which may be why they are so widespread and persistent. When we say that the public deserves good information, it means that every article should be accurate from beginning to end. This is even more important during the pandemic, when people’s health and happiness depend so much on what they see in the media.

Or you can send us a message on Full Fact’s WhatsApp on 07521 770995, or through the contact form on our website. Please mark your message #edline, and we’ll do our best to correct as many as we can.