Has Britain lost its faith?

By most standards, this is an interesting week for religion in the UK. Yesterday the new Archbishop of Cantebury and head of the Church of England, Justin Welby, was officially sworn in. Today, MPs will vote on the Government's plans to legalise same-sex marriage in the face of opposition from many (though not all) in the religious community.

The idea that religion is "on the wane" in Britain won't be unfamiliar to most readers, and today's Daily Express gave us a reminder of the ever more vacant pews in the Church of England:

"As Justin Welby takes office as the 105th Archbishop of Canterbury, the average Sunday attendance in each of the Church of ­England's [CofE] 16,000 churches is 58 and falling."

Let's put this, and the wider facts on religion in the UK, under the spotlight.

Is the UK a still a Christian country?

Following the release of data from the 2011 Census last year, one report from the Guardian commented that the UK now stood as "perhaps the most godless country... in the industrialised world".

Indeed, the census itself didn't bode well for religion - 25% of residents in England and Wales say they have no religion, compared to 15% in the 2001 census. Meanwhile the proportion self-defining as Christian fell from 72% to 59%. The Office for National Statistics (ONS) sets out the numbers: 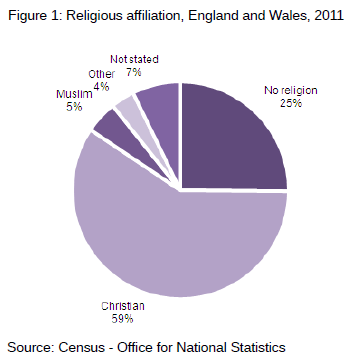 But is the picture that simple? Readers might remember that several thousand people in both the 2001 and 2011 censuses entered "Jedi Knights" as their religion. So this might not give us the clearest picture of religion in the UK at the moment.

Another measure of religious affiliation is provided by the British Social Attitudes Survey (BSA) which regularly asks respondents which religion or denomination they most closely consider themselves belonging to, as well as how often they attend church and the religion under which they were brought up.

The trends over time make for interesting reading. Since 1983 there has been an upward trend in the proportion of respondents who considered themselves not to belong to any religion, while Anglican belonging has fallen most steeply among those of Christian faith: 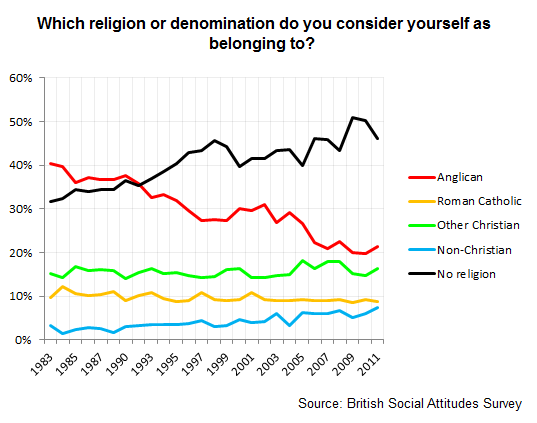 Furthermore, while it's still the case that over one-third of us are brought up within the Church of England, this proportion has also been in decline since 1991, and those brought up without a religion similarly shows upward growth: 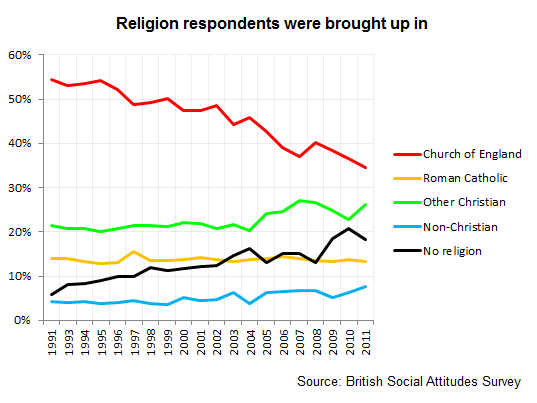 Of course, just because people self-identify as belonging to a religion doesn't mean they actively practice that religion by, for instance, regularly attending religious services. The BSA also measure how often respondents attend services connected with their religion: 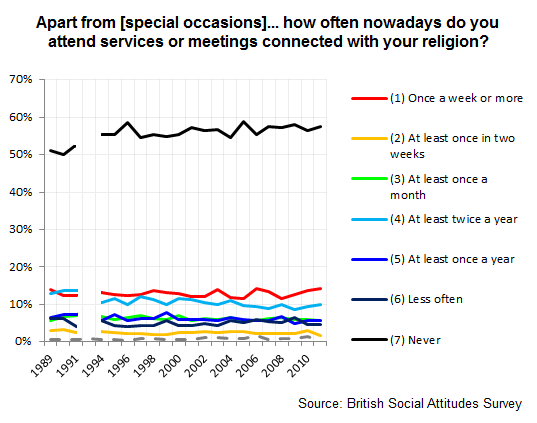 *Data for 1993 is an anomaly - we've asked NatCen Social Research to look into why this might be, and will update when we know more.

It's worth bearing in mind that evidence has previously shown a gap between the attendance people report and whether or not they actually attend church, so the figures here might be overestimates of the actual rate of attendance.

What's noticeable from the graph nevertheless is that the proportion of people who don't report attending services at all has been creeping up slowly from just over 50% in 1989 to 58% in 2011. However, the proportion of regular (at least once a week) attendees has remained relatively steady at around 14%.

There's little question that religious identifiaction in Britain has been on the wane for the past few decades at least - the bigger question is of course whether these trends will continue.