Has the Coalition ended child detention?

This piece has been updated. See bottom for details.

"...the coalition government in general, and deputy prime minister Nick Clegg in particular, have maintained a consistent narrative that child detention has ended. The government's own data relating to numbers of children detained proves this is not true."

"She argues that "the government's own data relating to numbers of children detained proves this is not true". She is not comparing like with like. We have ended child detention as it existed under Labour and as we said we would in opposition."

In 2010 the Liberal Democrats pledged to stop holding children in immigration detention centres. Just a few months later, this promise found its way into the Coalition Agreement, and by the end of the year the Deputy Prime Minister was announcing to the country how the Government would see through the policy, starting with the closure of the family unit at Yarl's Wood removal centre in Bedfordshire.

Some may be wondering what went wrong if they read Diane Taylor's scathing criticism of the Coalition's policy in The Guardian last week. She armed herself with Government figures showing that 107 children were detained in the UK in the first six months of 2012, 35 of whom were in ordinary immigration removal centres as opposed to new 'family friendly' units introduced by the Coalition.

Nick Clegg and Barbara Nalumu - who led Citizens UK's campaign on the issue - rejected the analysis, accusing the author of failing to compare "like with like" and clarifying that the policy they worked to introduce needed to allow for exceptional and border cases. So what has happened since the election?

Migrants can be held in detention for any number of reasons. The Home Office user notes on the subject helpfully outline that these include: to establish someone's identity or the basis of their claim; where there is a risk that the person with fail to comply with certain conditions; where there might be a risk to the migrant or to the public, or to simply remove them if they have no legal right to be in the UK.

We can start with what the numbers actually say. Data on detention from the Home Office is available up to the second quarter of 2012. The most recent snapshot tells us that as at 30 June 2012 there were four children in detention solely under the Immigration Act (as opposed to being under criminal grounds) in the UK.

However this snapshot isn't that helpful as families only tend to spend a short amount of time in these centres (though the Government might argue that this is a good sign). A more useful measure is to look at the flow of children into detention.

These figures show us that, in 2011, 127 children (under 18) entered detention solely under Immigration Act powers. In the first six months of 2012, 113 similarly entered detention. These aren't necessarily all different children, and a handful are registered as being detained twice. 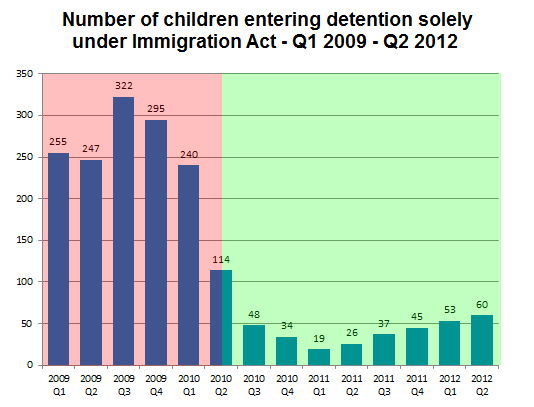 This might, on the face of it, lead us to conclude that the policy to "end child detention for immigration purposes" has not been kept. However, we need to look a little deeper at how the Government actually intended to implement the policy. Introducing the policy, the Deputy PM announced in December 2010:

"As an absolutely last resort, involving what we predict will be a tiny number of cases, they [families who had unsuccessful applications for asylum] could be moved to new, family-friendly accommodation, immediately prior to leaving the country."

This 'family friendly' unit - called Cedars - was opened at Crawley, near Gatwick Airport, in August 2011. According to the Government:

"This accommodation will not be an Immigration Removal Centre. It will have a family friendly environment, with an entirely different look and feel. The site will be secure but will respect family privacy and independence."

Of course, some would still consider a 'family friendly' unit where residents remain unable to enter or leave at will a 'prison' in all but name. That said, a recent report by HM Inspectorate of Prisons (HMIP) - cited by Diane Taylor - presented mostly positive findings on how well the unit was operating to 'family friendly' standards:

"The attractive environment and caring ethos of Cedars contrast with the inevitable fear and uncertainty among families undergoing the removal process to create a sense of dissonance for visitors. It is an exceptional facility and has many practices that should be replicated in other places of detention."

The picture wasn't perfect, however, and there were concerns at the treatment of families at the point of arrest and removal.

However, even if we accept that Cedars is significantly different to the Immigration Removal Centres under Labour, not all of the children still entering detention are going to Cedars. So far in 2012, 72 children entered detention via Cedars, yet we know that 113 were detained solely under the Act.

So where are the other children going?

Save for a small number of outliers, most of these children are still entering the Immigration Removal Centre at Tinsley House next to Gatwick Airport. This is what Nick Clegg still calls a "newly refurbished facility", used only for border cases. Then Immigration Minister Damian Green explained its usage last year in Parliament:

"The small number of family rooms at Tinsley House Immigration Removal Centre may be used in place of the new pre-departure accommodation until May. After May, Tinsley House will only be used for those few families who are refused entry to the UK at the border and need to be held for a short time prior to their return or for criminal and other high-risk families who could not be accommodated safely in the pre-departure accommodation."

So is this backed up by evidence? HMIP isn't so sure this time. It's latest report, from February last year, involved an initial evaluation of Tinsley House's facilites, finding that:

"The family unit was in the process of refurbishment and was designed to house up to eight families with children. These plans to hold children in the IRC sit uneasily with the government's stated commitment to end child detention for immigration purposes.

"We were told two types of family might be held at Tinsley House: those detained from aircraft and awaiting a flight back to their home countries, and families judged unsuitable for the new 'predeparture accommodation' currently under construction nearby."

So we'll have to wait for HMIP to follow through with its intial investigation to get an independent perspective on how 'different' the newly-refurbished Tinsley House actually is. See update below.

A crucial missing ingredient to all these figures is that they don't include children detained in short-term holding rooms at ports and airports for less than 24 hours. Nick Clegg stressed in the article that it was still necessary to hold some families at the border to refuse their entry, however the figures are still relevant to consider.

The only numbers seemingly available on children held at ports and airports come via Freedom of Information requests. One, from the Children's Society last year, found that between May and the end of August 2011, 697 children were held at all Greater London and South East regional ports.

This appears to sit very badly with the UK Border Agency's (UKBA) view in 2010 of how border cases would operate:

"This will be short detention, for a few dozen families each year, usually for less than 24 hours and only where logistics or safety makes pre-departure accommodation unworkable."

So in spite of accounting for border cases in implementing the policy of 'ending' child detention, there is evidence to suggest that what the Government at the time considered would be relatively exceptional cases have proven to be significantly more numerous, and so dilute the strength of Nick Clegg's claim.

The Coalition Government has not ended the detention of children, but a closer look reveals this isn't actually what was promised. Nick Clegg and Barbara Nalumu claim to have ended child detention as it existed under Labour.

There is reasonable evidence to suggest child detention now is significantly different to that under the last administration. The figures do show a marked reduction in the number of children entering detention and HMIP is mainly positive about the 'family friendly' nature of the new Cedars pre-departure accommodation.

That said, a number of children are still being held in Tinsley House Immigration Removal Centre, which as yet lacks a stamp of approval from HMIP, and indeed the Inspectorate finds its new role sits uneasily with the Coalition's commitment.

Furthermore, Freedom of Information requests have revealed that hundreds of children aren't even showing up on the statistics as they're being briefly held at the border in ports and airports. The Government maintain this still needs to happen and that this exception was accounted for when the policy was formulated late in 2010, but the numbers are significantly greater than the "dozens" anticipated by the UKBA.

The Ministry of Justice today published a new report from HMIP into Tinsley House Immigration Removal Centre. As we stated, the existing concern was that Tinsley House remained in use for detaining children and didn't have the stamp of approval from independent inspectors that it provided a 'family friendly' environment. This was central to the claim that child detention has ended "as it existed" under Labour.

Now, however, HMIP has delivered a shining review of the Centre's family unit (where children are sent):

"The family unit was a well designed, family friendly and welcoming facility. Families generally arrived with little notice and stayed for short periods. Staff had received appropriate child centred training and aimed to assist adults to support and care for their own children. Initial family assessments were completed, but were not sufficiently detailed. Ongoing records demonstrated good staff engagement with families and a number of families had written to express their appreciation of the care they had received on the unit."

Between October 2011 and September 2012, 56 children were detained in Tinsley House. On average, they stayed at the facility for 21 hours and none stayed longer than six days.

While the report doesn't change te fact that large numbers of children have been held at airport holding rooms, as the Children's Society found last year, it does dispel certain concerns about the facilities some children are being sent to and will come as good news for proponents of the Coalition's policy on child detention.