A Survation poll for Esher and Walton shows the Liberal Democrats polling ahead of incumbent MP Dominic Raab.

Survation’s poll wasn’t of the constituency, it was a national survey of voting intention which was then used to model an estimate of what local voting could be – this might not be reliable. 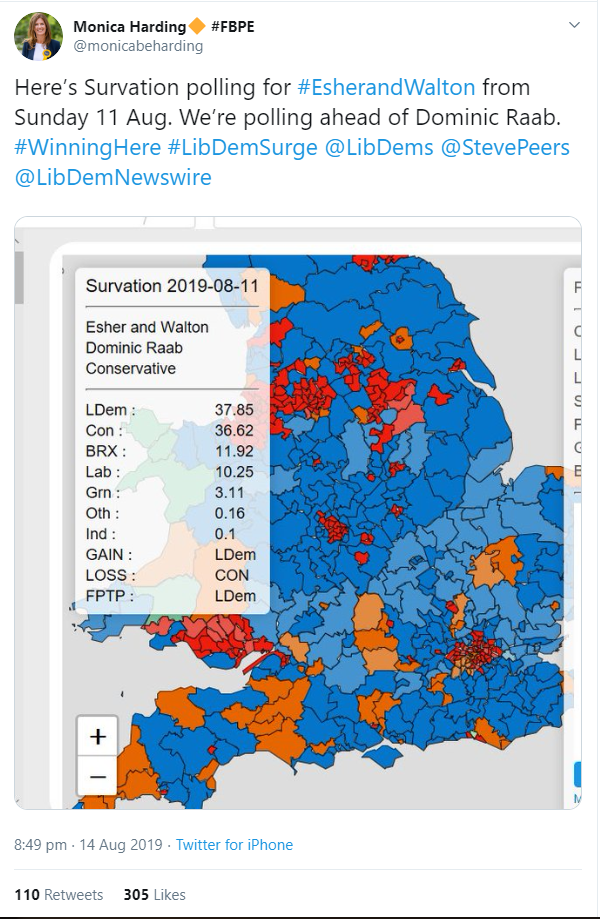 This week the prospective Liberal Democrat parliamentary candidate for Esher and Walton tweeted that her party were polling ahead of the constituency’s incumbent Conservative MP and Foreign Secretary Dominic Raab, in the area.

But this was based on an interpretation of a national poll, not local data, which may not be reliable. It’s not accurate to claim that this was polling “for” the constituency. Using polling data in this way is an issue we’ve written about before.

What it’s based on

The figures are based on a poll by Survation from 11 August.

Around 2,000 UK adults were asked how they would vote in an election if it were held the following day. 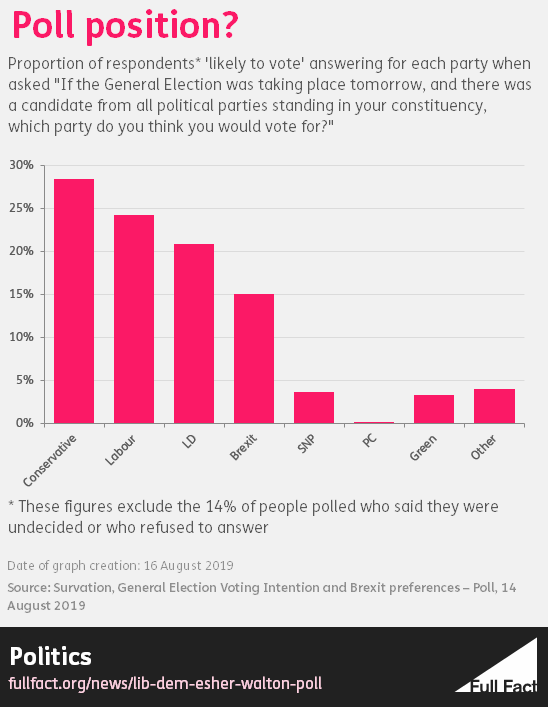 These results are for the whole of the UK: the Survation poll didn’t ask any questions about specific parliamentary constituencies.

To get that information Ms Harding used Flavible, a polling website not affiliated to Survation, to take the survey’s national results and localise them to project the voting intention for each UK parliamentary constituency in England, Scotland and Wales.

We’ve written before about local Liberal Democrat branches using Flavible projections to claim that opinion polls say they are ahead of other parties in various constituencies.

The website predicts that in the event of an election and based on the national results from the Survation poll, the Liberal Democrats would poll 37.85% in Esher and Walton ahead of the 36.62% of the Conservatives.

That’s quite a change from the actual results of the 2017 election in the constituency which saw Dominic Raab elected with 59% of the vote, Labour come second with 20% and the Liberal Democrats third with 17%.

As we’ve said before, the main problem is that you can’t reliably convert national polling results into local areas like this.

Flavible’s stated methodology is a ‘weighted swing’, whereby changes in support for the parties at the national level are applied to each constituency, with the numbers weighted by things like which way the seat voted in the Brexit referendum and whether it changed hands in either of the last two elections.

But regardless of the accuracy of Flavible’s model, Ms Harding’s tweet suggests that polling was done at a constituency level within Esher and Walton, which wasn’t the case.

This article was updated to replace an embedded tweet with a screenshot.