"Two thirds of cash meant for world's poorest is channelled through global bodies that charge for administration costs."

Since the Coalition's 2010 Spending Review, only one government department has seen any meaningful increase in its budget. At a time when substantial cuts are being made across Whitehall, the Department for International Development (DFID) will be gifted 0.7% of Gross National Income (GNI) in 2013.

Now The Sun, quoting a report from the International Development Committee, repeats allegations that too little of this money is reaching those in need. The newspaper also suggests that the increase in DFID's budget will only lead to further waste.

It's the 'multilateral assistance' that's the focus for the Committee's criticism - when DFID partners up with supra-national entities like the UN or the World Bank to deliver projects. The Committee's report offers a breakdown of the £3.3 billion expenditure in this area: 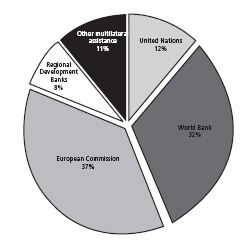 Is it money down the drain?

The Committee notes that an increasing proportion of DFID's core funds are being funnelled into multilateral organisations (up from 38% of its budget in 2007-8 to 42% in 2011/12). In addition, 40% of DFID's bilateral assistance is now directed via these institutions - so that's an extra £1.6 billion on top of the £3.3 billion core multilateral budget.

Here we find the figure that The Sun refers to - the £4.9 billion total sum paid to multilaterals (the newspaper's "fat cats") is equivalent to two thirds of DFID's spending.

Where there are concerns about the corruption of a country's government, a multilateral funding arrangement might offer the best route to ensure that any money is well spent.

To suggest an extreme example, a cheque from DFID paid directly into a nation's bank account might end up financing a fleet of Mercedes, rather than subsidising free primary education. When the British economist Peter Bauer once described development aid as "transferring money from poor people in rich countries to rich people in poor countries", he probably had this type of scenario in mind.

However, the Committee warns that "multilaterals have high costs and at times limited effectiveness" and suggests that local NGOs (Non-Governmental Organisations) might be in a better position to ensure that taxpayers' money is spent effectively.

What are these administration costs?

Any process - particularly one involving money - will always generate bureaucracy. Staff costs usually account for a large share of any bill and organisations that undertake more policy work are likely to employ more staff in-house. There is perhaps some irony in the fact that after reducing its own bill for administrative costs, DFID has now been criticised by the Committee for entrusting its money to other potentially less efficient organisations:

"we have some concerns about the mix and skills of staff, including whether it has the staff to oversee the huge expenditure of UK taxpayers' money undertaken by multilaterals."

"The level of administrative costs should not be an arbitrary target, but should be determined by what is best for delivering the Department's results."

While DFID admits that its figures on administration costs are "approximations", it stands by its calculations as "the best information currently available". It is praised by the Committee for producing an analysis of how much money multilateral organisations are diverting away from the frontline. What's more, the Department's most recent analysis follows on from its 2011 report examining how it distributed aid via multilaterals.

While The Sun alleges that "fatcats" are benefiting from the way that DFID allocates its funds, it's clear that the department is aware of a potential problem. However, while DFID investigates how it might reduce the amount of money spent on admin, it's under pressure to meet a budget target. This will probably involve it increasing the number and size of its aid donations. It's therefore likely that the accusations of inefficiency will not be dispelled any time soon.

Image courtesy of the Gates Foundation