Parliamentary expenses: is this meme about Theresa May correct?

Between 2005 and 2008 Mrs May made a number of office expense claims for sim-card hire and the purchase of a mobile phone. She also made claims for utilities bills on her second home.

Theresa May paid around £2,400 to “MP Services” on a regular basis.

Expenses of between £500 and £3,000 were claimed by Mrs May for payments to a company called MP Services between 2005 and 2007. The payments are usually for the printing of annual reports, newsletters, and outdoor banners.

Theresa May claimed the entirety of her monthly mortgage payments—between around £1,700 per month and £2,700 per month.

These aren’t monthly figures and Mrs May didn’t claim expenses for her entire mortgage. She claimed expenses on the interest payments for her mortgage on her second home, as MPs were allowed to do before 2010. She consistently claimed around £450-500 a month between June 2006 and January 2008.

Theresa May claimed expenses for a £1.59 paper clip.

We couldn’t find a claim for this exact amount or for a single paperclip, though Mrs May did claim expenses for paperclips along with other items of office stationery.

Theresa May has been claiming between £400 and £520 per month for ‘cleaning’ at her home.

These sums were claimed back in April-October 2006 and July 2006 to March 2007. They covered the whole period rather than being monthly.

We’ve been asked by readers to check an infographic about expenses claimed by Theresa May. 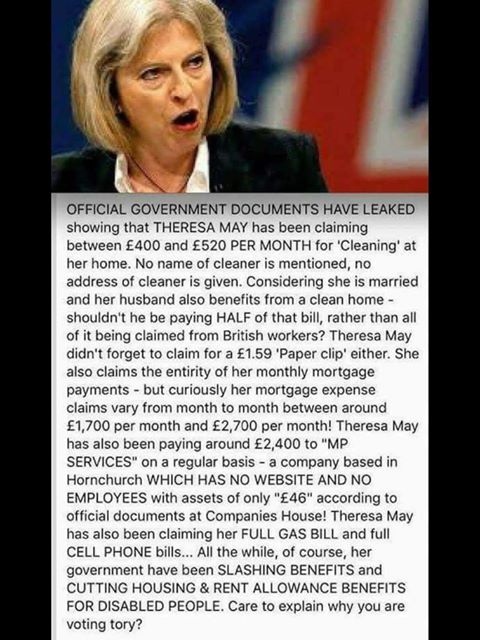 The figures quoted in the meme date from the late 2000s when Mrs May was an opposition MP, rather than more recent years when she was Home Secretary and then Prime Minister. Some of the figures are correct and others aren’t, as we’ll explain.

Looking at figures for all MPs across a single year (2008/09), we can see that Mrs May’s expense claims for her second home were on the lower end of the spectrum, and her work-related expenses claims were about average.

Up until 2009/10 MPs were allowed to claim a number of expenses relating to the costs of running their office and maintaining a second home either in London or their constituency (the rules were changed in May 2010).

In 2009/10, inner London MPs could claim a £7,500 allowance for living in London. All other MPs could choose between receiving this and claiming over £24,000 relating to the additional cost of running a second home. This £24,000 could cover things like rent or the interest payments on a mortgage (up to £1,250 a month), hotel expenses, food, utility bills, service charges and council tax.

So what about Theresa May’s expenses?

“Official government documents have leaked showing that Theresa May has been claiming between £400 and £520 per month for ‘cleaning’ at her home. No name of cleaner is mentioned, no address of cleaner is given.”

The documents referred to in the infographic are now publicly available on the official parliamentary website and the website of the Independent Parliamentary Standards Authority. They date back as far as 2004 and were published along with details of the expenses claimed by all MPs following the expenses scandal of 2009.

The documents were leaked to and published by the Daily Telegraph in May of that year, ahead of their officially scheduled publication date in July.

It is correct that Mrs May claimed expenses for cleaning as part of the Additional Costs Allowance MPs could claim for their second homes at the time, although it’s wrong to say that these amounts were “per month”. £520 was claimed covering April-October 2006 and another £400 was claimed covering July 2006-March 2007.

We’ve not been able to find an exact charge for £1.59 (or for a single paperclip, as suggested here) in Theresa May’s expenses for paperclips, but she did have paperclips included in her expenses, along with lots of other items of office stationery.

“She also claims the entirety of her monthly mortgage payments—but curiously her mortgage expense claims vary from month to month between around £1,700 per month and £2,700 per month!”

The average monthly payments were always around £450-500. She consistently claimed for her monthly mortgage repayments between June 2006 and January 2008. She also made claims covering June to December 2005 and in mid-2008.

“Theresa May has also been paying around £2,400 to “MP Services” on a regular basis—a company based in Hornchurch which has no website and no employees with assets of only “£46” according to official documents at Companies House!”

There are a number of claims within Mrs May’s expenses for payments to a company called MP Services between 2005 and 2007. These generally vary from around £500 a time to just under £3,000. The payments are usually for the printing of Mrs May’s annual report as an MP, newsletters, and outdoor banners.

There is a company called M P Services Ltd registered in Hornchurch, Essex. It was incorporated in June 2002 for the purpose of “other telecommunications services”. In the year ending March 2017 it had net assets of £262, that’s looking at everything the company has and has made in the year minus any payments and debts. We haven’t been able to establish if this is the same company which was mentioned in Mrs May’s expenses as all details, other than the company name, were redacted from the published expenses.

Between 2005 and 2008 Mrs May claimed a number of expenses relating to the hire and purchase of mobile phones. These ranged from around £40 for a month’s sim-card hire, to around £235 for the purchase of a mobile phone. The expenses forms don’t specify if these phones and sim cards were for the use of Mrs May herself or for members of her office staff.

Mrs May also expensed a number of utilities bills for her second home over this period. For example she expensed a gas bill of around £70 in 2006 and one for £59 in 2008.

How does that compare to other MPs?

In comparison to other MPs at the time, Mrs May’s spending is not out of the ordinary.

Back in 2010 the Guardian collated and published the full data on MPs expenses. Based on the sample year of 2008/09 we can see that Theresa May’s expenses were at the lower end of MPs’ claims in terms of second home costs, and roughly average for her work-related costs. 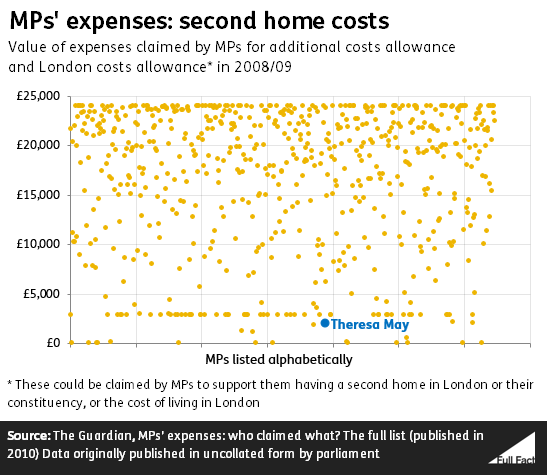 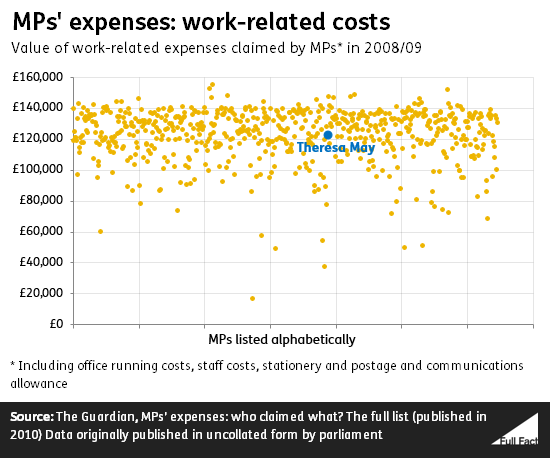 The system of MPs expenses has changed since 2010, it is now overseen by the Independent Parliamentary Standards Authority, rather than by committees of MPs. There have also been changes to the rules around what MPs can claim. For example, MPs can no longer claim for the mortgage interest on a second home—they have to use rented accommodation. The “London area” has also been widened, “reducing the number of MPs eligible for accommodation expenses” (although this still does not include Mrs May’s constituency of Maidenhead) and limits have been placed on the number of family members an MP can employ, and on the travel expenses they can claim.