The Royal Family: Are we getting our money's worth?

"The Royal Family…brings in a further £26.4billion to Britain's economy"

As the Queen's Diamond Jubilee draws closer, several newspapers in the last few days have renewed reports on the value of the Monarchy, both commercially and to the UK economy as a whole.

Reports suggested the Monarchy, as a 'brand' was worth £44.5 billion and added a further £26 billion to the UK economy.

So where do these estimates come from?

All of the news reports cite a Jubilee Report, released by Brand Finance, which examines the total intangible value and tangible assets of the UK Monarchy. 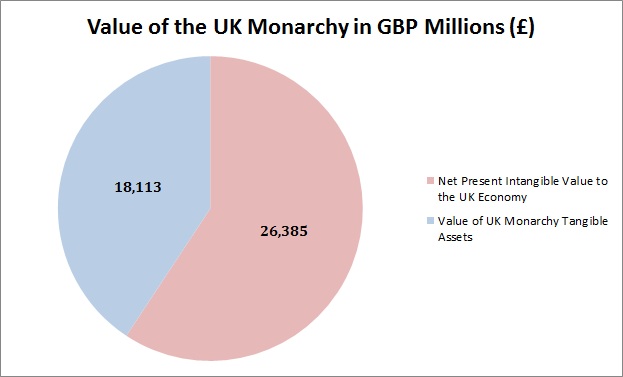 "The total value of £44.5?billion includes £18.1?billion of assets including the Crown jewels and royal palaces. On top of that, the monarchy is reckoned to be worth an additional £26.4?billion because of the economic benefits it brings to the UK, through the boost to tourism and other industries."

City A.M.'s headline is also ambiguous since it reports the total £44 billion as the amount the monarchy brings to the UK economy. More precisely, the monarchy is estimated as bringing £26 billion to the economy, with the rest merely representing tangible assets.

The tangible assets of the Monarchy include the value of the Crown Estate, the Duchies of Lancaster and Cornwall and the Royal Collection. The contribution of each is illustrated below:

The intangible value is, as the name might suggest, a more amorphous worth and is more difficult to calculate.

It includes, according to Brand Finance, both the economic benefits conferred by the monarchy and the costs incurred.

These benefits are outlined as "revenue uplifts from tourism, products and industrial sales in addition to free global advertising and public relations" and "net increment to GFP created by the Royal feel good factor."

The costs, on the other hand, are more clearly identifiable as the Civil List, earnings from Royal tangible property (ceded by the country to the Monarchy) and security.

The cost and benefit breakdowns are outlined below: 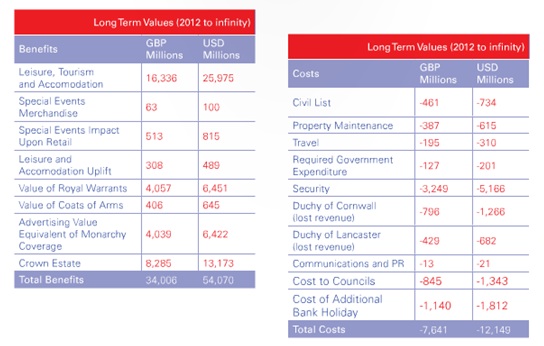 The long term value of the UK monarchy is estimated by Brand Finance at £34 billion, with costs totalling £7.6 billion, arriving at the total of £26.4 billion.

Unfortunately, none of the sources of the estimates are made clear in the report, aside from references to Brand Finance's own research. There is however a list provided in the accompanying press release. They are as follows:

The news reports of the research were broadly accurate although some stumble over what the figures actually refer to. Brand Finance's research estimates a Royal value of £44 billion of which £26 billion is the net benefit to the economy, rather than in addition to the total.

Whether or not we can trust the estimates depends on evaulating each of the disparate sources upon which the report relies. The intangible costs - especially tourism - are the most difficult to verify and account for the majority of the valuation. Evidence suggests this may be based on visitor numbers to tourist sites, but this is not necessarily comprehensive.

It must also be remembered that the £44 billion refers to the 'brand value' of the Monarchy - extending from 2012 to 'infinity' rather than being an annual figure.