Was David Cameron right on the success of Work Experience schemes at PMQs?

"It [the Work Experience programme] is not a compulsory scheme; it is a scheme that young people are asked to go on and the findings are that around half of them are actually getting work at the end of these schemes. That is a far better outcome than the Future Jobs Fund."

At a lively session of Prime Minister's Questions today, David Cameron responded to a question from Priti Patel MP on the Government's work experience schemes, after the MP urged praise for the companies which participate.

He used his answer to claim that half of the participants in the scheme were getting work at the end of them. This, he said, was a far better outcome than was enjoyed by the Future Jobs Fund.

The Work Experience scheme, as part of the Government's 'Get Britain Working' project, was launched in January 2011 and designed to help young people gain valuable experience. The Future Jobs Fund dates back to 2009, under the previous Government, with similar aims.

So was the Prime Minister right?

Full Fact looked into similar claims by Work and Pensions Minister Chris Grayling on Monday, in which he said that nearly 20,000 participants had been taken off benefits following the work experience placements. However, the limits to the data sample cast doubts over such conclusions.

However, after contacting Downing Street to confirm the source of Mr Cameron's claims today, they pointed us to the same document - even the same table - that Mr Grayling apparently used as the basis of his benefits claim: 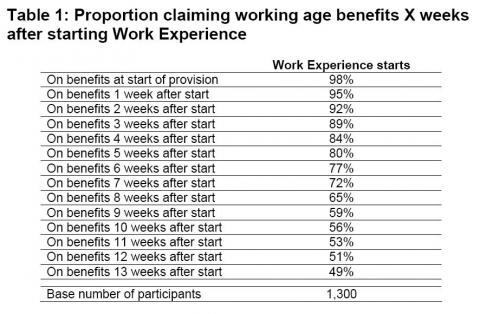 The table demonstrates that, 13 weeks after starting the placements, 49 per cent of the participants were on working age benefits, according to data from the National Benefits Database.

However, as the Guardian's Reality Check blog also noticed, people who are no longer claiming working age benefits may not necessarily be "getting work" as the Prime Minister suggests. They could instead be returning to education or training, or simply dropping out of the benefits system entirely.

"The fact is that 13 weeks after starting their placements, around 50 per cent of those taking part have either taken up permanent posts or have stopped claiming benefits" (emphasis added)

This statement suggests that not all of the participants who stopped claiming benefits necessarily took up permanent posts, although we don't know what proportion went into employment.

Full Fact has contacted the DWP statistics department responsible for the data to find out whether the Prime Minister's interpretation is adequate. However at present the difference between talking about participants 'in work' and 'out of working age benefits' raises some question marks.

Is it a better outcome than the Future Jobs Fund?

The Department for Work and Pensions (DWP) meanwhile published a similar analysis of the Future Jobs Fund in March last year, in which the outcomes of the participants were likewise tracked.

The data shows that, based on their original sample of 2,000 participants, 53 per cent were on benefits after 11 months of the scheme's start. This means the measure was taken significantly longer after the scheme began, and we don't yet have data available for benefit claims 11 months after the Work Experience programmes started.

Since the Future Jobs Fund placements lasted six months, taking the data for benefit claimant rates after this period similarly shows between 50 and 57 per cent of participants still on benefits from six months onwards.

However, the analysis also takes a larger cohort of 22,820 participants, analysing their outcomes over seven months. Taking all the measured benefits together, 45 per cent of participants were on benefits after seven months of the scheme's start.

So the picture from the Future Jobs Fund analysis seems to be similar to that provided about the Work Experience scheme - namely that around half of the participants are no longer on working age benefits after participating in the schemes. However, given that the different analyses look at vastly different timeframes, it is very difficult to compare the successes of the two.

The DWP statistics division responsible for the figures used by the Prime Minister has now responded to Full Fact's concerns over the interpretation of the data.

They confirmed that the study into participant outcomes only looked into whether the participants continued to claim working age benefits, and did not contain information on whether or not those participants had moved into work.

Precedent from other DWP schemes such as the Jobseekers Regime and Flexible New Deal (JRFND) suggests that not all of the particiants who move off benefits actually move into work. In this particular case, the evidence shows that only around 66 per cent of the participants who moved off benefits actually moved into paid work, with some of the others moving into education and others actually setting up a new Jobseekers Allowance claim.

Of course, the schemes are different and cannot be adequately compared, so this is little more than an illustration of the possibilities that the Prime Minister failed to account for in his statement.

In addition, it was made clear that the study purposely did not analyse the findings in terms of whether the scheme has been a success or not, partly because there was not counterfactual data to compare the findings to. In essence, without a 'control' group of jobseekers who were not on the scheme, the effect that the scheme itself had on employment afterwards cannot be determined by the data available. 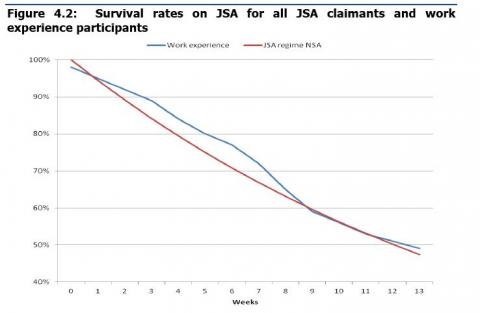 The research indicates that the rates shown so far in the Work Experience scheme are nothing out of the ordinary compared to most claimants.*

However, the DWP also highlighted that the data was based on a limited sample, similar to what Full Fact pointed out on Monday. Hence any attempts to evaluate the scheme based on this data, by the Prime Minister or the CESI, will be likewise limited because the long-term effects of the scheme are not being captured.

The Prime Minister and Work and Pensions Secretary's representations of the data differ in how they interpret being off 'working age benefits'. The Prime Minister claims that this shows they are "getting work", while Mr Duncan Smith suggests the same people could simply be off benefits rather than in work.

However, after speaking to the DWP, it is clear that the data to which the Prime Minister was referring did not measure how many of the participants had got work. Other research has illustrated that not all claimants necessarily enter employment after leaving benefits.

Furthermore, it is not possible to conclude the 'success' or 'failure' of the scheme from the data because no control groups of people not on the scheme were used. Again, other research suggests there may not be much of a difference at the early stages, based on the limited sample available.

So until the DWP extend and develop their research into the Work Experience scheme outcomes, the Prime Minister does not seem to have an adequate basis to make the claims he did.

*One of our readers has pointed out that the graph [Figure 4.2] from CESI is potentially misleading. The Work Experience programme is targeted at young people aged 18-21 who have been unemployed for 3-12 months, as the Government explain in their impact assessment.

Meanwhile, this is being compared to 'all JSA' claimants. This would have the effect of altering the rates of the Work Experience participants to account for their initial three months (at the very least) of claimant status.