Were 1 in 8 rioters in receipt of incapacity benefits?

"'Too sick to work' but not too sick to riot: One in eight defendants were on incapacity or disability benefit." Daily Mail, 25 October 2011.

"One in eight of the rioters who caused mayhem and destruction across Britain this summer was on incapacity benefits and unfit for work, official figures revealed yesterday." Daily Express, 25 October 2011.

"THUGS held in the August riots were part of a feckless criminal underclass — with one in eight on DISABILITY benefits." The Sun, 25 October 2011.

"ONE in eight thugs who ransacked shops during the summer riots claimed they were too sick to work." Daily Star, 25 October 2011.

As official figures were released yesterday which analysed the background of those appearing before the courts for August's rioting, newspapers rushed to publish their judgment on the cause of the riots.

One particularly noticeable theme in today's reports has been the number of those involved in the riots who were in receipt of different forms of benefits, fuelling support for the online petition campaigning to have benefits taken away from rioters.

In the pursuit of a powerful argument about rioters being 'benefit cheats', did the Mail and others cheat with their figures?

All four papers claimed one in eight of rioters were on benefits which deemed them unable to work.

At the beginning of each article they qualified this by stating that 60 rioters were on Incapacity benefit while 100 were on Disability Living Allowance. Herein lies their first error.

As the Mail in fact acknowledges, some people may well be on both Incapacity benefit and Disability Living Allowance, making their claim that 160 'rioters' were on disability benefits incorrect. A total of 160 claims for 'disability' benefits had been made, however, this correlates to less than 160 people if claims were made for more than one type of disability benefit.

To arrive at the figure of 1 in 8, the papers took this uncertain figure of 160 people as a proportion of the total number of 1,350 defendants whose details were provided, to make 12 per cent, or 1 in 8.

Secondly, and more importantly, most of these papers incorrectly refer to the Disability Living Allowance as a form of incapacity benefit. The Mail's claim of 'too sick to work but not too sick to riot' and the Express' reference to those 'on incapacity benefits and unfit for work' should only relate to those on Incapacity benefit since DLA is given regardless of employment, however, their qualifying figures did include DLA.

However whether by luck or by judgement, the claim that 1 in 8 were on some form of incapacity benefit is actually correct. The number each newspaper failed to report was claimants on the new version of Incapacity benefit, the Employment and Support Allowance, which also came to 100, the same amount as those on DLA.

It seems evident this is more of a lucky coincidence rather than an accurate calculation by the Mail and the Express since they fail to report the ESA figure. Using just the number of those on Incapacity Benefit at 60 people out of 1,350, this is only 4 per cent or around 1 in 22. 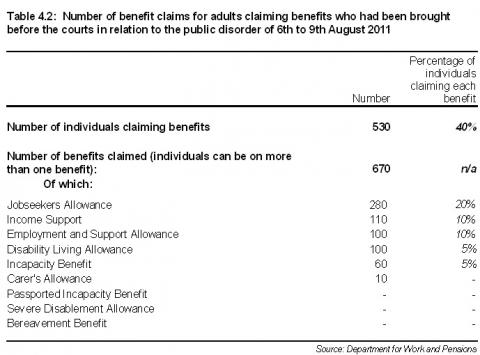 This confusion regarding the definition of particular benefits is even more evident in the Sun. This claims an astonishing 260 rioters "were on handouts for being unfit to work". As the table above shows, this has been calculated by wrongly adding the number of those on DLA with those on Incapacity benefit and ESA.

Furthermore, the Sun's claim that more than a third were on some kind of benefit should be treated with some caution. A total of 530 rioters were receiving benefits, which out of the total of 1,350 adults brought before the courts for rioting in the Department for Work and Pensions figures is around one third at 39 per cent. However, out of the total of 1,984 defendants, it is 27 per cent.

It is also worth noting that the DWP warned "the dataset on which these figures are based are provisional and are reported here sooner than DWP benefit caseloads are normally released. Therefore there may be some inaccuracies in the benefit caseloads recorded as a result". Some caution should be taken therefore when making conclusive statements using the data.

Although the claim that 1 in 8 rioters were on out of work benefits was technically correct, the benefits categories selected to explain this were incorrect. The papers all appear to have wrongly added the number of those on DLA, a benefit independent of employment status, to those on Incapacity benefit.

It seems to just be a coincidence that the number on DLA is the same as those on the new form of Incapacity benefit, ESA.

Furthermore, the papers wrongly count each benefit claim as by a different person, despite acknowledging that some claims could have been made by the same person. Therefore, regardless of definition, any reference to the combined number of rioters receiving two different types of benefit could run into problems.