Dog food bought in B&M and made in China has led to two dogs being put down in the last two weeks because it destroys their kidneys.

We have seen no specific evidence of this. There is evidence of a link between dogs eating jerky treats and developing a kidney disorder, but this is not linked to treats from one specific brand or shop. Many of the cases involve jerky made in China. 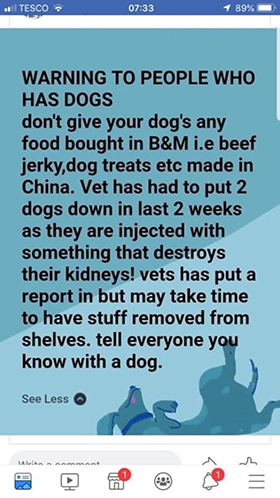 A viral claim about dog treats from retailer B&M causing kidney damage in pets has been shared almost 30,000 times on Facebook.

However, some of the details share similarities with findings from The Veterinary Poisons Information Service (VPIS).

The VPIS has highlighted a link between pets developing Fanconi Syndrome (a kidney disorder) after eating jerky treats (not any kind of dog food, as the image suggests). However, VPIS doesn’t link this to jerky treats bought from one specific shop or brand.

The VPIS keeps a database of Fanconi cases related to jerky consumption. In 2016, 22 cases in dogs in the UK were recorded on the register, with a further eight in 2017. In two cases in 2016, the dog was euthanised as a result, in 11 the dogs went on to make a full recovery, and in the remaining nine cases the situation was classified as “ongoing”. We have not seen any more recent data than this.

Dr Nicola Robinson, Head of Service at the VPIS told us: “The consumption of Jerky treats in dogs has been linked to Fanconi syndrome in dogs and cats and we have had many cases reported to us here at the VPIS since 2016. Fanconi syndrome affects the kidneys and in severe cases leads to death or the pet has to be euthanised. The toxin has not yet been identified so we would recommend that owners are cautious giving these treats especially if they originate in China”.

The issue is not linked to one single shop

The VPIS told us that it had not identified a specific issue with jerky bought from the shop B&M compared with any other retailer. Of the 22 cases recorded by VPIS in 2016, five involved jerky purchased from B&M, but there were also cases related to jerky bought from six other shops. Across the 22 cases, 11 different brands of jerky were recorded.

The VPIS does, however, note that China is the most common country of origin for jerky products associated with Fanconi Syndrome cases. The jerky originated from China in 13 cases recorded in 2016.

The VPIS advises pet owners that: “If you notice your pet is unwell with decreased appetite, decreased activity, vomiting, diarrhoea and increased drinking or urination, contact your veterinary surgeon for advice.”