In response to the New Zealand mosque attacks, Islamists have burned down a Christian church in Pakistan.

False. The video used as evidence for this statement shows an attack on a church in Egypt in 2013.

Conservative political activist Theodora Dickinson shared a video on March 18 along with the following caption:

"In response to the New Zealand mosque attacks, Islamists have burned down a Christian church in Pakistan. Why is this not being shown on @BBCNews?!”.

The reason that the video is not being shown on BBC News is that it’s not from this year, it’s from 2013. It’s also not from Pakistan; it was actually filmed in Egypt.

This YouTube video, uploaded in 2013, clearly shows the same footage—only less zoomed in than the version shared by Ms Dickinson. 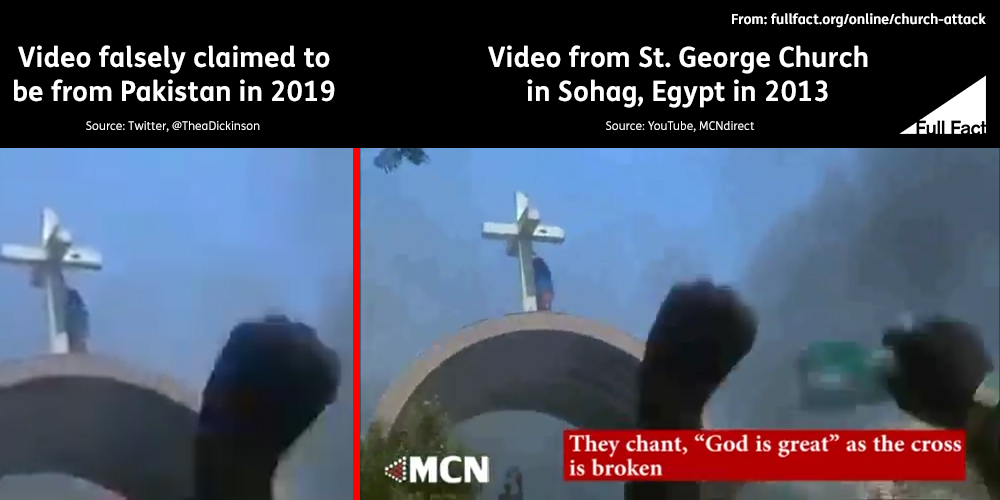 AFP Fact Check have done an excellent job of confirming that the church in the video is St George Church in Sohag, Egypt.

This finding is also consistent with a Human Rights Watch article which contains witness reports of an attack on the St George Church in August 2013. The appearance of the building in the video matches images from media reports of that attack at the time.

This article is part of our work fact checking potentially false pictures, videos and stories on Facebook. You can read more about this—and find out how to report Facebook content—here. For the purposes of that scheme, we’ve rated this claim as false because the video doesn’t show what the claimant says it does.