The BBC did not claim 350 people attended anti-lockdown protests

BBC News reported that 350 people attended the anti-lockdown protest in London on 29 May 2021.

BBC News did not say this. The claim is based on a screenshot from a year earlier with an altered caption.

Several posts on Facebook, Instagram and Twitter claim that the BBC lied about the size of the anti-lockdown march in London on 29 May 2021. Altogether these posts were shared thousands of times.

In fact, the posts themselves contain a fabrication, because they base their claim on a fake image. 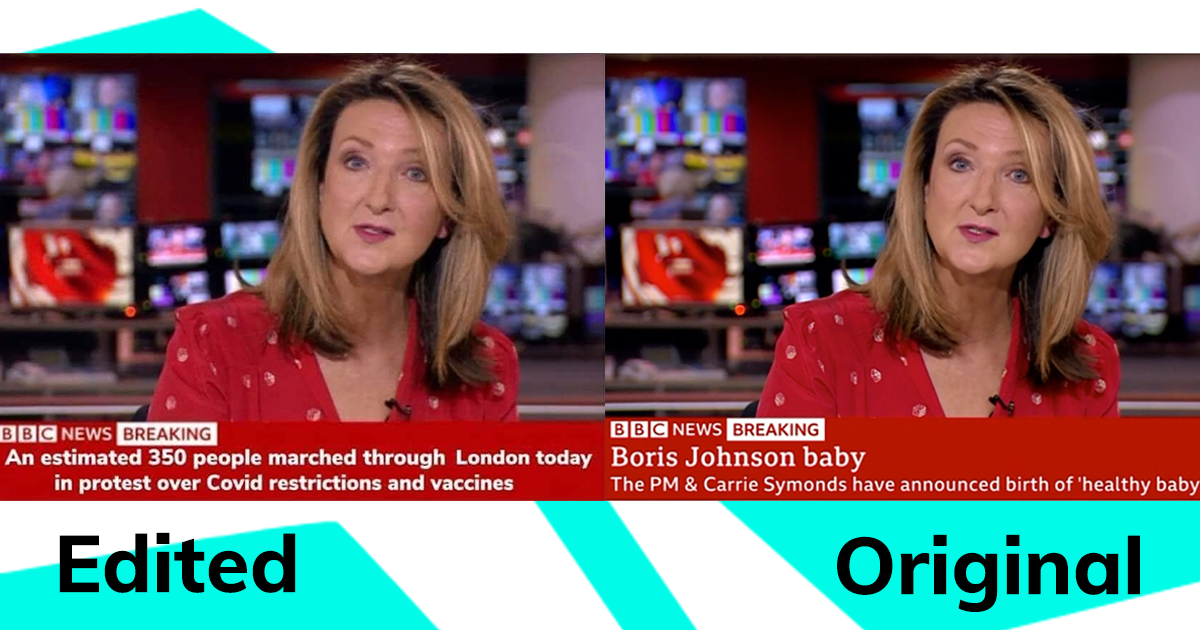 The posts compare two images. The first shows a large crowd in central London, which is either said or implied to be the anti-lockdown protest that took place on Saturday.

Different posts use different crowd photographs, which we have not yet been able to trace to their sources. According to the Guardian, “tens of thousands” people did attend the protest, but we cannot verify that estimate.

The second image is a screenshot showing the BBC News presenter Victoria Derbyshire above what appears to be a caption from the broadcaster which reads: “An estimated 350 people marched through London today in protest over Covid restrictions and vaccines”.

This caption is a crude fake that has been added afterwards. The original screenshot comes from a news report on 29 April 2020 about the birth of Boris Johnson’s youngest son.

The fake version is clearly not authentic, because the image of Ms Derbyshire is more than a year old. The text in the caption also uses the wrong typeface and has been centred on the screen, which is not the visual style of BBC News.

Ms Derbyshire has also said that the image is fake and that she wasn’t working on Saturday 29 May 2021.

The BBC covered several anti-lockdown protests this spring, but we have not been able to find any BBC coverage of the protest that took place in London on 29 May 2021.

This article is part of our work fact checking potentially false pictures, videos and stories on Facebook. You can read more about this—and find out how to report Facebook content—here. For the purposes of that scheme, we’ve rated this claim as altered because this claim is based on an edited image.