The price of Freddos has risen five times faster than inflation

Actually, you could have got 36 Freddos in 1999. More broadly, Freddos are not a good measure of inflation. The price of Freddos rose about five times faster than inflation from 1999 to 2017, but the minimum wage also rose above inflation in that period.

A post on Facebook claims that the minimum wage should be £18 an hour, because in 1999 one hour’s pay at minimum wage could buy you 72 Freddo chocolate bars, yet in 2017 it could only buy you 30 Freddos.

The post is, obviously, light-hearted and not intended to be taken entirely seriously. (We’ve also found what seems to be the original version of the graphic, from Twitter in 2017, which also doesn’t seem to have been posted totally seriously either.) But it’s a good excuse to talk about inflation and chocolate.

On a superficial level, the calculation is wrong because Freddos cost 10p in 1999—meaning you could have bought 36 with an hour’s pay on the minimum wage back then, not 72. Both the price of Freddos and the minimum wage have risen faster than inflation in the last two decades.

The internet has long revelled in tracking the dramatic rise of the cost of Freddos over time but—just in case you had any doubts about it—the “Freddo Index” isn’t a good measure of inflation.

Inflation is the change in prices over time. There’s different ways to measure inflation, but typically it’s calculated by tracking the price of a typical “basket of goods”.

And that means that wages need to rise at the same rate (in line with inflation) in order for us to be able to afford to buy the same things in the same amounts.

Based on the government’s two official measures of inflation (CPI and CPIH), if a Freddo cost 10p in 1999, and the cost then rose in line with inflation, then a Freddo should have cost 14p in 2017 (an increase of 40%) and 15p today.

Yet at the start of 2017 a Freddo cost 25p, and rose to 30p by March (at least in some parts of country—costs seem to vary slightly across the country and between shops). That means that by March 2017 the cost of a Freddo had increased by 200% since 1999—five times faster than inflation. 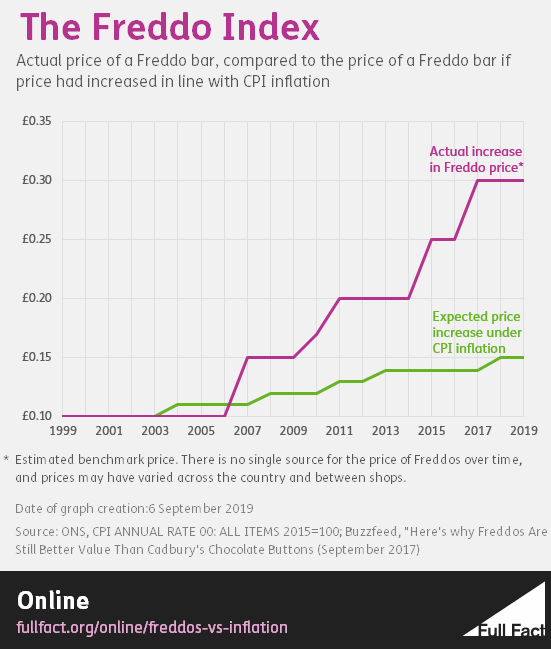 The minimum wage has also risen much faster than the rate of inflation, though.

The National Minimum Wage was first introduced in April 1999, and was worth £3.60 per hour for those aged 22 and over.

This article is part of our work fact checking potentially false pictures, videos and stories on Facebook. You can read more about this—and find out how to report Facebook content—here. For the purposes of that scheme, we’ve rated this claim as satire because the post is humorous. (Facebook does not currently have a label for humorous or light-hearted content other than satire, so we sometimes use “satire” for things that may not strictly be satirical. We’ve previously called on Facebook to introduce a more appropriate label for such humorous posts.)