It is most likely that these are genuine commenters posting similar messages on purpose.

Multiple Facebook posts and tweets shared thousands of times have claimed that Boris Johnson is using bots to post identical positive comments below his posts.

However, while some comments could be the result of bots, it is unlikely that all of them are.

There are other reasons why many of these repeated posts don’t look like the work of bots. We found that similar comments on Mr Johnson’s posts often feature variations and misspellings, and were not mass posted at the same time (which some believe is an indication of bot activity). 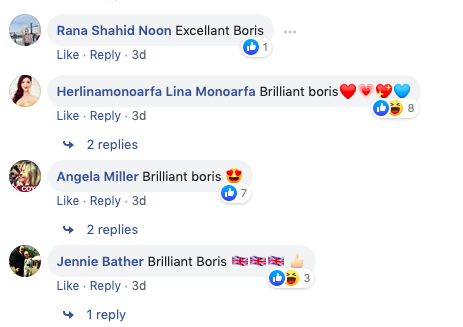 Also, some of the “evidence” used to support the theory that posters are bots are messages that appear to be malfunctioning bots. For example one comment reads “//”Brilliant Fantastic” &name=”Boris”.”

However, Full Fact spoke to several accounts behind these apparently malfunctioning bots, all of whom said they were posting such comments as acts of satire in response to the claim that Mr Johnson’s Facebook supporters were largely bots.

One of the first Twitter accounts to claim that there were malfunctioning bots went on to retract their claim.

This article is part of our work fact checking potentially false pictures, videos and stories on Facebook. You can read more about this—and find out how to report Facebook content—here. For the purposes of that scheme, we’ve rated this claim as false as there is no evidence the multiple similar comments on Boris Johnson’s Facebooks posts are bots and there is reason to believe they are the work of real people.