Emmanuel Macron said the UK will only be allowed to stay in the EU if they fully adopt all EU rules and regulations including adopting the Euro within six months of stopping Brexit.

He hasn’t said this. If the UK remained in the EU we would have to continue following EU law, but not in areas where we have opt-outs. This means we wouldn’t have to join the Euro.

Emmanuel Macron said the UK must take its share of migrants, 300,000 now immediately and up to 100,000 every year until the situation is resolved if it wants to remain in the EU.

He hasn’t said this.

Emmanuel Macron said the UK must pay in full the costs involved for all other member states for Brexit, currently 39 billion euros if it wants to remain in the EU.

He hasn’t said this. Under the terms of the Brexit withdrawal agreement, we’ll pay the EU an estimated £39 billion “divorce bill” for outstanding commitments and liabilities. If we remain in the EU, we would pay our membership fee each year which would cover all these things. 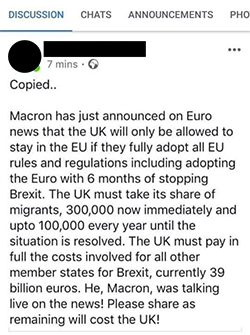 Versions of this post—about what French President Emmanuel Macron is demanding if the UK wants to stay in the EU—have been shared over 16,000 times on Facebook.

We can find no evidence that Mr Macron has said any of these things. The claims in the post about what the UK would be forced to do if it stayed in the EU are incorrect.

The French Embassy in London confirmed to us that Mr Macron said none of these things.

We can find no evidence that Mr Macron has said anything like this.

If the UK remained in the EU we would of course have to continue following EU law. Following EU rules and regulations is a necessary part of membership of the EU and we signed up to this principle in 1972.

There are certain areas of EU regulation that the UK has opted out of. One of these areas is membership of the Euro currency.

If we remained in the EU, we would retain all of our opt-outs. The treaty governing the UK’s opt-out of the Euro says “the United Kingdom shall not be obliged or committed to adopt the euro without a separate decision to do so by its government and parliament”.

We can find no evidence that Mr Macron has said this, and it’s incorrect.

There is no demand on Britain to take 300,000 migrants if it remains in the EU. Nor is this demand made of any other EU member states.

“The UK must pay in full the costs involved for all other member states for Brexit, currently 39 billion euros.”

Again, there is no evidence Macron ever said this, and it’s incorrect.

£39 billion is the estimated cost of the “divorce bill” we would pay the EU as part of the Brexit withdrawal agreement. It covers things like payments to the EU budget until 2020, and other outstanding commitments and liabilities we have towards the EU until 2064.

If we remained in the EU, we would pay our membership fee each year which would cover all these things.

The Court of Justice of the European Union ruled on 10 December that the UK can revoke its Article 50 notification by itself, without requiring the agreement of other EU member states. This means that there is no clear mechanism by which other member states could impose new conditions, such as the ones suggested in this claim, on the UK for remaining in the EU.

We updated this article with comment from the French Embassy in London.