No, we are not experiencing “global cooling”

Incorrect. “Global cooling” describes a long term period during which the earth’s average temperature is cooling. Although the average global temperature was slightly lower in 2017 and 2018 than in 2016, these drops were not record breaking. Global temperatures tend to fluctuate from one year to the next and NASA data shows that overall global warming is occurring: the planet is getting hotter and hotter over time, and at a faster and faster pace.

NASA data shows that global temperatures dropped sharply over the past two years.

The average global temperature was slightly lower in 2017 and 2018 than in 2016. But global temperatures tend to fluctuate from one year to the next and the clear overall trend is that the planet is getting hotter over time: 2016 was the hottest year on record, 2017 was the second-hottest, and 2018 was the fourth-hottest.

This post—claiming that “we just had 2 years (2016-2018) of record-breaking Global Cooling”—has been shared over 300 times on Facebook.

It is incorrect—while temperatures in 2017 and 2018 were lower than 2016, global temperatures have not dropped sharply, nor at record breaking levels, and there is no “global cooling” trend occurring.

“Global cooling” is typically used to describe a long term period during which the earth’s average temperature is cooling.

But data from NASA clearly shows that opposite is happening. We are experiencing global warming: the planet is getting hotter over time, and at a faster and faster pace.

All the evidence shows that the planet is getting hotter

It’s correct that the global average temperature was higher in 2016 than in 2017 or 2018, but this is not evidence that “global cooling” is occurring.

2016 was the hottest year on record, 2017 was the second-hottest, and 2018 was the fourth-hottest, according to the data from NASA that is linked in the Facebook post itself. 18 of the 19 warmest years on record have occurred since 2001, and the average global temperature has increased by about 0.8° to 1.0° Celsius in recent years, compared to the average temperature between 1951 and 1980.

As Gavin Schmidt, Director of the Goddard Institute for Space Studies summarises: “2018 is yet again an extremely warm year on top of a long-term global warming trend”.

This graph of NASA’s data shows that long-term trend more clearly. Global warming does not mean that every year has to be hotter than the year before. Rather, it means that generally average temperatures are on the rise (the red line), even if they may fluctuate somewhat year-to-year (the blue line). 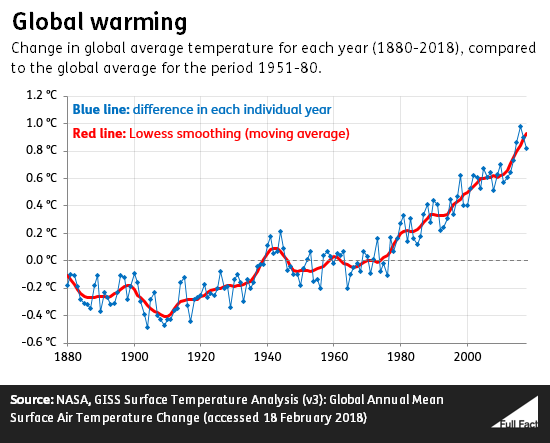 Judith Curry, a climatologist and former chair of the School of Earth and Atmospheric Sciences at the Georgia Institute of Technology has commented on the slightly lower temperatures in 2017 and 2018. She said: “A two-year trend is not meaningful in terms of understanding anything about how climate is changing.”

Even if it was only the fourth-hottest year on record across the planet as a whole, plenty of cities and countries did see their hottest-ever temperatures in 2018. This interactive map from the BBC allows you to see this in full.

The World Meteorological Organisation (WMO) points to “abnormal” levels of heatwaves, wildfire and drought in much of Europe and the USA in 2018. There were also floods in Kerala that affected over five million people, and hundreds of people killed by flooding in Japan. The WMO has produced a map charting all of the extreme weather events in 2018.

This article is part of our work factchecking potentially false pictures, videos and stories on Facebook. You can read more about this—and find out how to report Facebook content—here. For the purposes of that scheme, we’ve rated this claim as false.

By Joël Reland
Share this:Facebook Twitter
We aim for our fact checks to be as accurate and up-to-date as possible. If you think we've made an error or missed some relevant information, please email team@fullfact.org.