Immigrants/refugees living in the UK get a weekly allowance of £250.

Incorrect. People given refugee status in the UK are not entitled to any special allowances, but can claim the same benefits as any UK citizen. Asylum seekers are entitled to £37.75 per week and accommodation if they are homeless and can’t afford food.

British old age pensioners get a weekly spouse allowance of £25 a week.

A state pensioner may get an “Adult Dependency Increase” worth up to £68.35 a week if they have a partner who is financially dependent on them. They must have claimed before 2010 and it will no longer be paid from April 2020.

Illegal immigrants and refugees living in Britain get a weekly spouse allowance of £225.

Incorrect. There is no weekly spouse allowance for refugees. People staying in the UK illegally are not entitled to claim any benefits.

British old age pensioners get a weekly hardship allowance of £0.

Correct, insofar as the “weekly hardship allowance” doesn’t exist. Pensioners can claim additional benefits to help with their income.

Illegal immigrants and refugees living in Britain get a weekly hardship allowance of £100.

Incorrect. This allowance does not exist.

A British old age pensioner gets a yearly benefit of £6,000.

A full British state pension is worth up to £6,500 or £8,500 per year. Pensioners may also qualify for top-ups, partner support, and additional benefits.

Illegal immigrants and refugees living in Britain get a yearly benefit of £29,900.

Incorrect. People who are staying in the UK illegally cannot claim any benefits. People living in the UK as refugees are entitled to the same benefit and pension payments as any UK citizen. This means it’s theoretically possible for them to get that sum, but it’s highly unlikely due to the benefit cap. 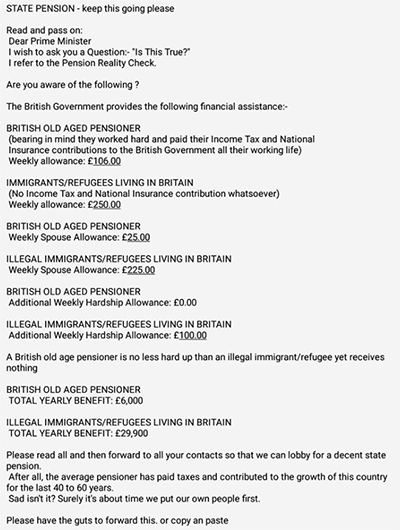 We’ve seen versions of this post about state support for pensioners and refugees, which has been shared almost 2,000 times on Facebook, before. We first checked the very same figures back in 2012, and we also checked a similar version last year. It’s incorrect on every figure.

People staying in the UK illegally aren’t entitled to claim anything from the UK state.

Refugees in the UK (in other words, people who have had an asylum claim approved) aren’t entitled to any particular benefits aimed at them. They can receive the same benefit and pension payments as any UK citizen. It is theoretically possible to receive £29,900 a year in household benefits, but this would be unusually high.

Asylum seekers (who are applying for refugee status in the UK) are entitled to around £38 per week per person if they are homeless and unable to afford food.

What can a British pensioner claim?

Pensioners born after this date can claim the new state pension—the full weekly rate is £164.35.

This means a full state pension is worth around £6,500 a year before top-ups—or around £8,500 if it’s the new state pension.

We are not aware of any “hardship allowance” for pensioners, but they can claim state benefits (some of which are pensioner-specific) to help with their income.

What about pensioners’ spouses?

A pensioner’s spouse may be entitled to a state pension in their own right. Additionally, a state pensioner may get an “Adult Dependency Increase” if they have a partner who is financially dependent on them. The Department for Work and Pensions told us the full rate is £68.35 a week—around £3,500 a year.

What can someone who is in the country illegally claim?

Nothing. People who are staying in the UK illegally are likely to be removed if their immigration status is discovered by the authorities, so they wouldn’t be able to claim benefits without alerting the authorities to their status. They inherently do not have the right to work in the UK.

What can a refugee claim?

It depends whether you’re talking about an asylum seeker or a refugee.

An asylum seeker (who is making an application for refugee status in the UK) can get £37.75 per week, if they are homeless and not able to afford food. They can also be allocated some form of accommodation (which they cannot choose and is unlikely to be in London or the South East).

Asylum seekers don’t get a “spouse allowance”, rather an asylum seeker’s spouse would be entitled to the same amount in their own right if they were also seeking asylum. We aren’t aware of any “hardship allowance” for refugees (as was the case when we checked the claim in 2011), and have asked the Home Office for more information.

If an asylum seeker is granted refugee status in the UK, they could then claim benefits, tax credits and pension payments on the same basis as UK nationals. There aren’t any specific benefits available just for refugees.

It is theoretically possible—but very unlikely—for a refugee household to receive £29,900 a year in benefits, just as it is for UK nationals. This would only occur if they weren’t subject to the benefit cap. Under the cap, the maximum total benefits a household in London containing a couple or a single person with children can receive is £23,000, or around £442 a week. The cap is lower if you’re a single adult or live outside London.

Some people are not affected by the benefits cap, for example people over state pension age, and people getting Universal Credit because of a disability or health condition that stops them working.