Polish pensions are not directly subsidised by the UK

Poland has lowered its retirement age from 67 to 60.

Poland lowered its retirement age using money from the EU.

There is no evidence for this. Poland gets back more from the EU budget than it pays in, but none of this is spent directly on pensions.

The UK’s pension age is going up.

Two posts on Facebook, which have together been shared over 60,000 times, claim that Poland has lowered its retirement age from 67 to 60, while the UK’s pension age is going up.

This needs a little clarification.

The retirement age in Poland is 65 for men and 60 for women, following a law which came into effect in October 2017. This reversed a 2013 policy by a previous Polish government which set about gradually raising the retirement age to 67 for both men (by 2020) and women (by 2040).

It’s also not possible to say, as the post does, that Poland has lowered its retirement age using our money, presumably meaning money it has received from the UK via the EU.

Poland is a “net beneficiary” from the EU’s budget—meaning it gets back more than it pays in—unlike the UK which is a net contributor. But Polish pensions are not directly subsidised by the EU. The funding Poland gets from the EU budget goes to specific schemes (such as supporting agriculture, infrastructure or economic development), rather than being a simple transfer of money. Obviously this funding could mean that Poland has more to spend overall, but there is no evidence that EU contributions are what directly fund its lowering of the pension age. 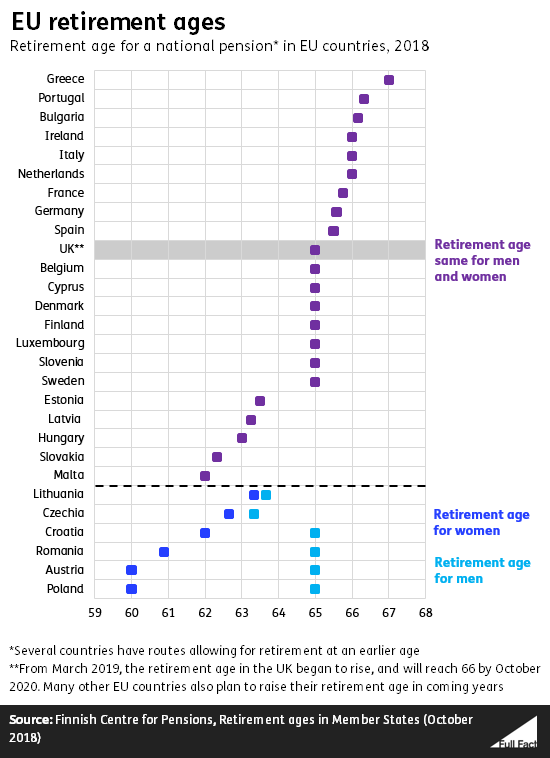 This article is part of our work fact checking potentially false pictures, videos and stories on Facebook. You can read more about this—and find out how to report Facebook content—here. For the purposes of that scheme, we’ve rated this claim as opinion because it’s a matter of judgment as to how far EU contributions helped pay for the lowering of Poland’s retirement age.