These figures on MP expenses are incorrect

Total travel and accommodation costs for SNP MPs were £79,852 in the last 12 months.

Total travel and accommodation costs for Scottish Conservative MPs were £250,427 in the last 12 months.

A Facebook post comparing the cost of travel and accommodation expenses between Scottish Conservative and SNP MPs has been shared widely on Facebook. It is a screenshot of a tweet originally published in July 2018 and is similar to a tweet published later that same day by the Campbeltown and Kintyre SNP branch.

Given the numbers of MPs in the claim and the date of the tweet, the year being referred to is presumably 2017/18. Looking at the parliamentary expenses figures for that year, the amounts quoted in the tweet are wildly inaccurate.

In the same year the total travel and accommodation costs for the 13 Conservative MPs from Scotland came to around £389,000, or just under £30,000 on average per MP.

We cannot see any reasonable way in which the tweet could have come up with its figures.

Even just accounting for the expenses an MP claims in rent (so not including any additional accommodation costs like utility bills) and the personal travel expenses of the MP (rather than of the MP, plus their staff and any dependents) the numbers in the claim are still incorrect.

Total parliamentary expenses (beyond just travel and accommodation, also including things like offices costs) for SNP MPs in 2017/18 came to just over £7 million, or £201,000 on average per MP.

Total expenses for Scottish Conservative MPs were just over £1.9 million, or £148,000 on average per MP. 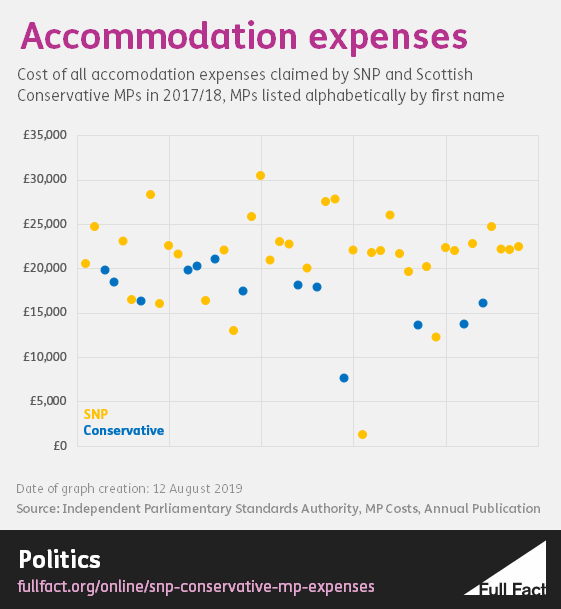 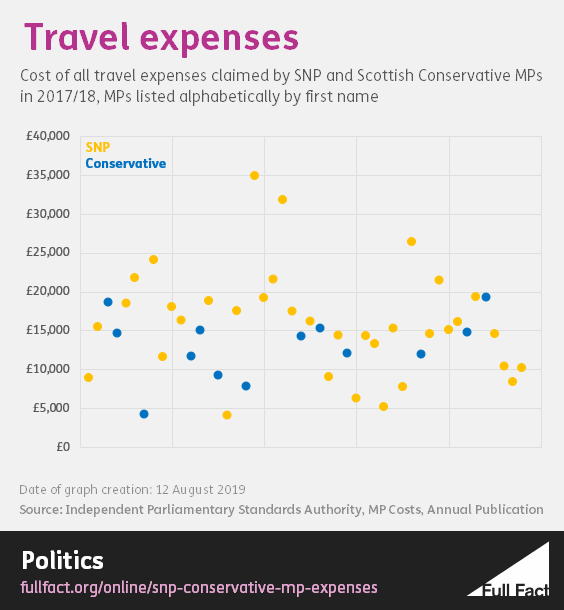 We got in touch to request a correction regarding a claim made by SNP Kintyre on Twitter.