We checked their claims on Scottish public attitudes, election results, immigration and jobs.

“We do have social attitudes studies going back for years which show us that in fact Scotland is just as conservative with a small c as the rest of the country and when it comes to things like welfare, taxation, etc, they respond in exactly the same way as the rest of the UK.”—Merryn Somerset Webb

On the EU, polls have found people in Scotland are more likely to be in favour of remaining in the EU.

“Anybody who thinks that somehow or other we have had a great Tory victory, go and look at the results”—Jim Sillars

The Scottish Conservatives won a total of 31 seats from a possible 129 during the recent Scottish Parliament election.

These 129 seats are voted for in two ways. 73 of these are individual constituencies while the rest are regional seats which are voted for on the basis of parties rather than candidates.

The Scottish Conservatives won more regional seats than any other party, with 24 elected. In the constituency lists it won the second most number of seats, behind the SNP, with 7 elected. So, it gained most of its seats in the regional vote. 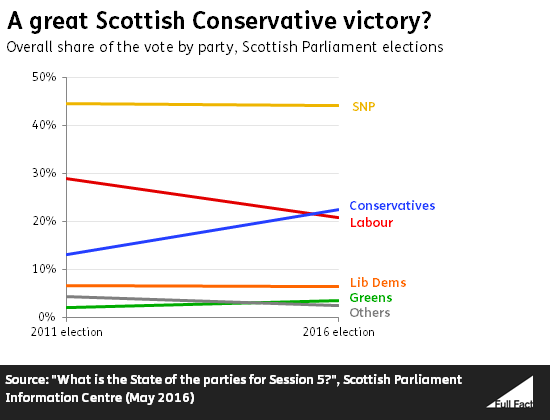 “Do you believe that the number of immigrants that come in under the EU regulations has pushed wages down for people already living in Britain?”—David Dimbleby

Merryn Somerset Webb is right to suggest there’s no definitive evidence on this topic. Studies in the past have disagreed over whether there’s a positive or negative impact of overall immigration on the wages of UK workers, partly because they use different methods to estimate the answer.

But studies do tend to agree that the impact is small, particularly with immigrants from other EU countries.

The impact isn’t the same for everybody: lower-wage workers are more likely to be negatively affected than higher earners.

The Migration Advisory Committee, which advises the government, said in a recent review:

“330,000 people here in Scotland have jobs partially dependent on membership of the EU”—David Mundell MP

There’s no evidence that these jobs are dependent on British membership of the EU.

The estimates look at how many jobs are linked to exports to the EU, and we don’t know how these exports, and so the associated jobs, would be affected if the UK were no longer an EU member.

Around 330,000 is an old estimate by economic consultancy CEBR which has since been revised. It told us the most up to date figures on this come from the Treasury, which suggest about 250,000 jobs in Scotland are linked to trade with the rest of the EU.

This includes both how many jobs are in industries that export to the EU, and jobs that come about indirectly as a result of exporters’ increased demand for products and their workers’ wages.

What happens to exports if we leave depends on the trading and other economic arrangements made in negotiations after a vote to leave.

Round up posts like this—and those we publish for PMQs and major speeches by politicians—don't go into as much depth as our usual articles or cover every claim made in the show. Often they are done under a much shorter deadline, so we prioritise a clear conclusion above all else. As always we welcome feedback: please email the team on feedback@fullfact.org.