It's common to hear claims like this about the effect of Scottish independence on future UK elections. The argument goes that since Scotland has predominantly Labour MPs, then without Scotland the UK would have a permanent Conservative majority in the House of Commons.

This reasoning doesn't stand up to past experience. Since 1918, only four UK general election outcomes would have been affected had Scottish MPs been taken out of the equation.

That's not to say it wouldn't be more difficult for Labour: a majority of Scottish MPs have been Labour at every election since 1955, and Labour remains dominant by historical standards. Hence the 'advantage' to the Conservatives in Scotland's absence is getting bigger: 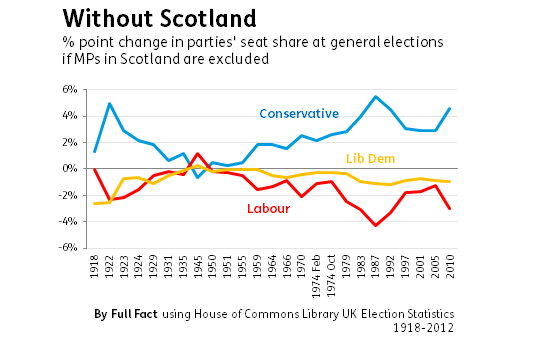 Another reason to doubt the prospect of 'permanent' Conservative governments is the possibility that people's voting patters will change. Parties in power often slip in opinion polls after winning an election - in fact a poll 'slump' of some sort is observable after every recent election. While some do increase their ratings again towards the end of their term and secure re-election, this won't always be the case.

It's also open to question whether social attitudes would shift in a new political landscape, although it's harder still to measure what effect the party in power has had on attitudes historically. In addition, it's impossible to predict how parties may alter their platforms in response to changing attitudes.